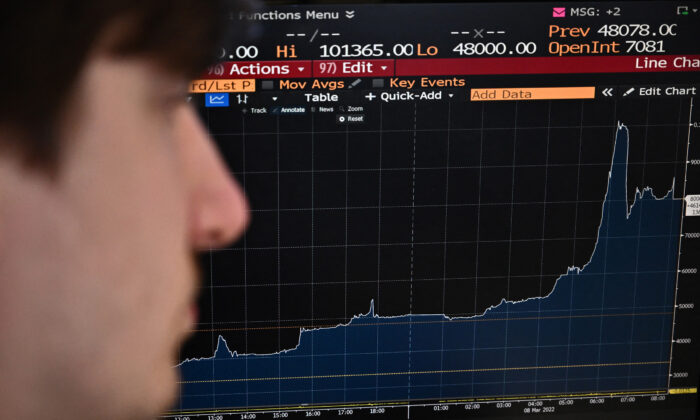 The London Metal Exchange suspended nickel trading because of the Tsingshan (THG) nickel incident, the first time since 1985 that the LME has suspended trading in a metal, in London, on March 8, 2022. The graph shows the one-day rise and fall of nickel prices on the London Stock Exchange. (Ben Stansall/AFP)
Russia-Ukraine War

The London Metal Exchange announced the suspension of deliveries of certain Russian-produced metals to its warehouses in the UK on April 1st.

The exchange, which is owned by Hong Kong Exchanges and Clearing, suspended its operations for more than a week and canceled billions of dollars of trades on March 8, after a run in commodity prices that day that saw nickel rise to $100,000 a tonne.

Tsingshan Holding Group, a Chinese metals group and the world’s biggest producer of stainless steel, built up a massive short position ahead of the surge in nickel prices earlier this month and found itself with $3 billion in losses.

It was the second time in the 145-year-old exchange’s history that it had suspended metals trading, amid pressure on commodity prices following the Russian invasion of Ukraine.

The LME said in a statement that there was a significant risk that customers receiving key metals from Russia, in British warehouses, excepting nickel, would be hit with additionally high costs after Whitehall placed 35 percent duties on imports of copper, lead, and aluminum from that country on March 15.

“The UK stands shoulder to shoulder with our international partners in our determination to punish Putin for his barbaric actions in Ukraine, and we will continue our work to starve his regime of the funds that enable him to carry them out,” said the UK International Trade Secretary Anne-Marie Trevelyan, after the new tariffs were announced.

Meanwhile, Chancellor of the Exchequer, Rishi Sunak, declared, “our new tariffs will further isolate the Russian economy from global trade, ensuring it does not benefit from the rules-based international system it does not respect.”

In addition to a ban on certain metals, the UK along with its G7 allies stripped Russia and Belarus of their Most Favored Nation status and deprived both nations of key benefits of WTO membership.

The British government published an initial list of £900 million ($1.18 billion) worth of goods including vodka, high-end luxury goods, and cars that will also face the additional 35 percent tariff on top of current tariffs.

Some LME members, according to Reuters, have called for the exchange to impose a full ban on Russian metals in its system, but LME officials have said that it would not go beyond the British government’s mandate regarding sanctions against Russia.

Aluminum from Rusal and copper from Norilsk Nickel (Nornickel) and JSC Uralelektromed, which are based in Russia, were only permitted into approved LME warehouses in Britain, if the exported metals arrived before March 25, said the LME.

The import ban also includes lead and aluminum alloy made by Rusal and three other Russian producers.

There are two approved LME warehouses located in the UK in Hull and Liverpool.

However, none of the four banned metals listed, are currently being stored in any of the two British warehouses, according to LME records.

The LME warehouse in Liverpool, does contain 1,416 tonnes of nickel, but imports of that metal have not been suspended or placed on the list for additional duties.

Russia’s Norilsk Nickel is one of the world’s biggest producers of nickel.