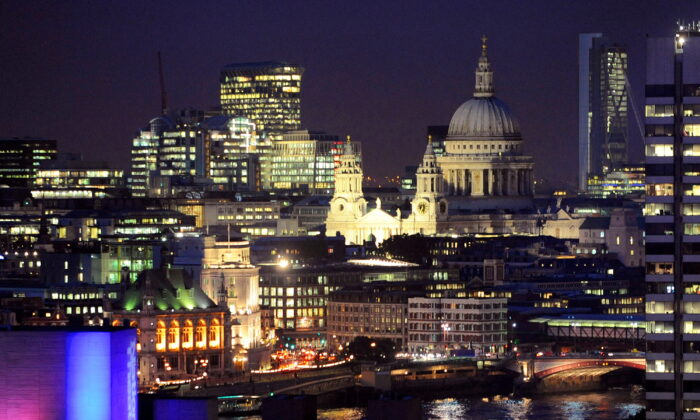 St Paul's Cathedral and areas of the financial district of the City of London are seen at dusk on Oct. 9, 2008. (Toby Melville/Reuters)
Economy

LONDON—London remains the top global financial center, according to a study from its own financial district, but is outgunned by New York and Singapore in access to talent, while Paris is adding competition from the European Union.

The study from the City of London Corporation selected seven centers that feature in other research on financial hubs, such as Z/Yen, which consistently puts New York in the top spot and London second.

The study, which added Paris this year, looked at five areas like digital skills, regulation, and talent. While London remains top overall from last year, New York is only slightly behind and closing the gap, followed by Singapore, Frankfurt, Paris, Hong Kong, and Tokyo.

New York remains by far the biggest financial center, while London lags Singapore in resilient business infrastructure, access to talent and skills, and a friendly regulatory and legal environment.

“UK policymakers need to guarantee that its businesses continue to enjoy unrivaled access to the best of global talent,” the study said.

“Withdrawal from the EU, the end of freedom of movement and the introduction of a new immigration system have damaged perceptions of the UK as an attractive business environment for international talent in recent years.”

Total tax for UK-based financial services firms, in particular banks, is also relatively high, it said. The finance ministry is reviewing some of the taxes.

Britain’s finance ministry has proposed that the Bank of England has a formal remit to “facilitate” London’s competitiveness.

A year since Britain left the EU’s orbit, leaving the financial sector largely cut off from the bloc, there are no signs of a “Brexit dividend” in looser regulation, though listing rules have been eased to help London catch up with New York in IPOs.