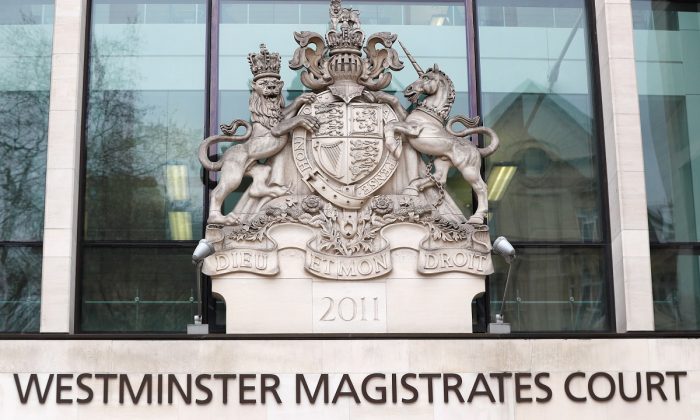 A facade of the Westminster Magistrates court is seen in detail, in London, Britain,on March 20, 2019. (Peter Nicholls/Reuters)
UK

LONDON—Fugitive billionaire jeweler Nirav Modi was denied bail in a London court on Friday, following his arrest last week on charges over his alleged involvement in a $2 billion fraud at India’s state-run Punjab National Bank.

The 48-year-old, who denies the charges, faces possible extradition to India where Prime Minister Narendra Modi is under pressure to take a firm stance on the case ahead of national elections in April-May. The two Modis are not related.

“There are substantial grounds to fear failure to surrender,” magistrate Emma Arbuthnot told a Westminster court, adding that Modi’s application in 2017 for a visa to the Pacific island nation of Vanuatu exacerbated those concerns.

While denying the bail, the judge observed that there is a substantial loss to the bank.#NiravInjail@itsmunish https://t.co/oOmkk6RYxB

A witness has alleged that Modi threatened to kill him and had also offered around 2 million Indian rupees ($29,000) as a bribe to offer false testimony, Toby Cadman, a lawyer representing the Indian government, told the court.

The prosecution also allege that mobile phones and a server containing evidence critical to the fraud case have been destroyed at the request of Modi, Cadman said.

Clare Montgomery, a lawyer representing Modi, said there was no evidence to support the claims of witness intimidation.

Modi, whose diamonds have adorned Hollywood stars such as Kate Winslet and Dakota Johnson, is among those accused in India’s biggest banking fraud, which has shaken confidence in the country’s state banking sector.

The diamond magnate was arrested in the Holborn area of central London last week after he went into a bank to open an account and a member of staff contacted police.

Modi was not a fugitive, was leasing a property in London under his own name and had made arrangements to surrender voluntarily on March 25, Montgomery, the lawyer representing him, told the court.

Punjab National Bank executives and government investigators have said that a lone middle-aged manager, later aided by a young subordinate, engineered fraudulent transactions totaling about $1.8 billion from 2011 to 2017.

PNB, India’s second-largest state-run bank, said in 2018 that two jewelry groups headed by Modi and his uncle Mehul Choksi had defrauded it by raising credit from other Indian banks using fraudulent guarantees issued by the PNB rogue staff.

The guarantees were sent to overseas branches of banks, thought to be almost all Indian, that would then lend money to the jewelry firms.

Modi and his family left India in January 2018, Indian officials have said, before the fraud came to light.

Wearing a white collared shirt and moustache and stubble instead of the clean shaven look familiar before his arrest, Modi smiled and nodded at the judge before being led away.

His next scheduled appearance before the court is via video link on April 26.