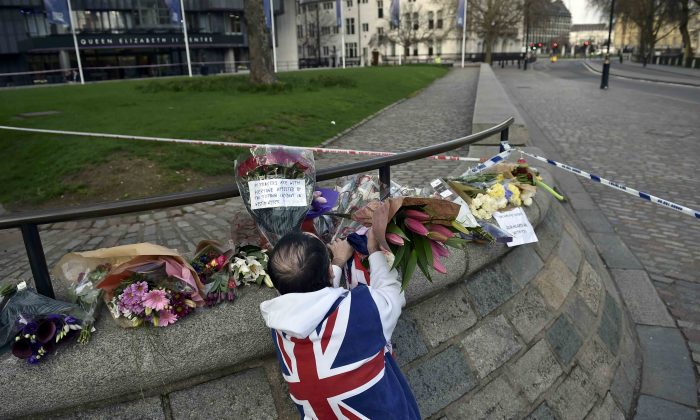 A man wears a Union Flag sweatshirt near the Houses of Parliament in Westminster the day after an attack, in London on March 23, 2017. (REUTERS/Hannah McKay)
International

BRUSSELS—Hours before Wednesday’s attack in London, the head of the European Union police agency Europol warned that a large group of radicalized individuals posed a constant threat to Britain and Europe.

“Some of these are likely to succeed in the future,” Rob Wainwright, who is British, wrote in a blog to commemorate the attacks in Brussels that killed 32 people on March 22, 2016.

In the year between those incidents and the attack that killed three people and injured dozens near Britain’s parliament, European security officials say intelligence sharing on potential threats has increased 10-fold.

More work is being done to tighten security by streamlining databases, clamping down on identity fraud and making reporting of suspicious individuals obligatory.

Britain is one of the top three users of Europol data. But as it leaves the EU, there is a risk that it will be shut out of this cooperation, becoming more vulnerable to Islamist radicals who have killed 300 people across Europe over the past two years.

The suspect in the London attack was British-born, and Britain is not part of the EU’s open-border Schengen zone. But London still shares with its EU peers fears—and information—about Islamists, often radicalized online, returning home after going to train or fight with jihadists in the Middle East, North Africa or Afghanistan.

British security officials warned parliament last year of the dangers of leaving Europol and the agreement covering the European Arrest Warrant, which requires all EU governments to arrest a suspect wanted in another EU country.

A year ago, when she was interior minister, Theresa May said that Britain’s close intelligence relationship with the United States “does not mean we would be as safe (outside the EU) as if we remain”.

May, now prime minister, said the Warrant had enabled Britain to extradite more than 5,000 people in the previous five years.

Being outside Europol, which was founded in 1998 to help combat organized crime, cybercrime and militant groups across borders, would leave Britain reliant on individual links with each of the other 27 EU governments, former officials say.

Before Europol existed, coordination was done “on the basis of who you knew and who you could ring up”, according to Bill Hughes, ex-director-general of Britain’s now defunct Serious Organized Crime Agency. He told parliament it was a “labyrinthine exercise”.

Besides Europol, Britain is also party to intelligence-sharing protocols of the Schengen agreement, and to a deal to exchange airline passenger data between EU security forces.

EU diplomats have refused to discuss Britain’s future defense and security cooperation until London triggers the formal exit proceedings, but one senior British diplomat said the government was likely to seek a “special relationship”.

“The European Union is not good at involving third parties and we need to be able to talk intimately,” the diplomat said.

May, expected to start two-year EU exit proceedings next Wednesday, has said she wants to retain a close relationship with the EU on security and defense, and the EU has expressed similar sentiments, but tensions are apparent.

She said in January that Britain’s intelligence capabilities were “unique in Europe” and that its military and counter-terrorism resources should help it to secure a better exit deal.

But EU Brexit negotiator Michel Barnier is dismissive. “Security cannot be weighed off against economic and commercial interests,” he said in a speech in Brussels on Wednesday.

But cooperation agreements between Europol and non-EU countries Russia, Turkey and Ukraine took several years to negotiate, and there are limits on what data can be shared.

Under EU agreements, transferring fingerprints and DNA data can take minutes. With Britain outside the EU, the Global Risk Insights think-tank says it could take months.

Some critics do note that information-sharing within the EU is still far for perfect. While France and Germany have large, well-staffed intelligence agencies, years of neglect in Belgium’s secret services were exposed by last year’s airport and metro blasts.

And militant Anis Amri, who killed 12 people at a Christmas market in Berlin last December, was on watch lists but still managed to avoid detection by using 14 different aliases in different countries.

However, the recent attacks have pushed the EU to try to plug gaps with a proposal in December to make it obligatory for states to issue alerts on individuals who pose a potential threat, and to float a plan to build a shared database of biometric data, such as fingerprints.

Claude Moraes, a Briton who chairs the European Parliament’s Liberty, Justice and Home Affairs Committee, said the stakes for Britain were high: “We need to have a much tougher discussion about what it is we are going to lose.”