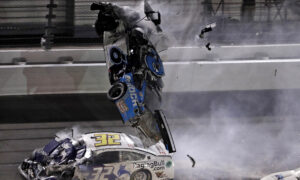 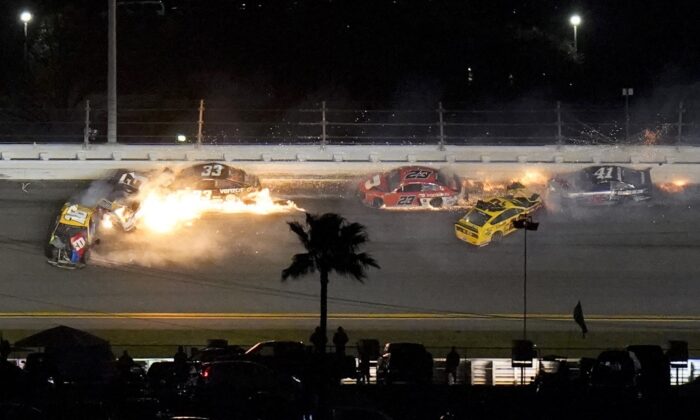 DAYTONA BEACH, Fla.—A truce has yet to be called in the Team Penske camp amid friction following the last lap Daytona 500 crash between teammates Joey Logano and Brad Keselowski.

Logano was leading Keselowski when Keselowski pulled out to attempt a race-winning pass, a move that caused contact that triggered a fiery eight-car wreck. Three of the cars involved were Fords fielded by Penske.

Logano had yet to speak to Keselowski by Friday—he said “it’s probably best to cool your jets a little bit before the conversation happens”—but planned to talk before the two raced again for the sake of the Penske organization. The two race Sunday on the road course at Daytona.

“If you do that, it’s the most selfish thing you can do because you’re not just hurting yourself or hurting him, you’re hurting all the people that work on that car and what did they do to you?”

Keselowski was visibly frustrated following the crash and heaved his helmet at his wrecked car. He was adamant after the race that he was not at fault for the collision.

“I don’t feel like I made a mistake, but I can’t drive everybody else’s car, so frustrating,” he said.

Logano did not accept culpability.

“I don’t think anyone did anything wrong,” he said. “Everyone is going to have different perspectives and I think that’s probably where we’re going to be. To me, the biggest heartbreak of this whole thing is that there are 400 people at Team Penske asking where their Daytona 500 bonus is and it’s up in a ball of flames up in turn three.”

Three-time Daytona 500 winner Denny Hamlin bristled at Logano’s deflection. He noted Logano could have guaranteed the organization a Daytona 500 victory if he’d allowed Keselowski to pull alongside him and the two Penske cars together would have blocked the track to other competitors as the teammates raced each other to the finish line.

“Say huh?” Hamlin posted to Twitter. “Ya k now best way to guarantee a Penske win? If the 2 got beside him then they race to the line to see which one wins.”

Hamlin and Logano were teammates for five years at Joe Gibbs Racing and have previously feuded.

The Daytona crash belied Roger Penske’s edict that his drivers are permitted to race one another hard so long as they don’t wreck. Not only did they fail at Daytona, but the crash destroyed a third Penske car, driven by rookie Austin Cindric, for an overall disastrous race for Penske.

Ryan Blaney had been involved in a race-ending crash 14 laps in, so all four Penske cars were destroyed.

Cindric said “that is a great question” when asked for his understanding on how the four-car Penske fleet was supposed to race each other at Daytona.

“If we are a Penske 1-2-3, I know my job and my job going into the weekend was to make sure that one of us wins the race,” Cindric said. “We have team meetings. We have strategy meetings. I think we all understand what is at stake. I think there is a great understanding of what the expectations are.”

Chase Elliott, the reigning Cup Series champion, said it makes no difference that it was teammates racing each other. He also noted that Hamlin in 2020 won his third 500 “because he didn’t throw a massive block.”

Elliott had his own commotion at Daytona in the exhibition Busch Clash when he crashed good friend Blaney as they raced for the victory on the road course. Neither won the race.

“We’ve talked. We’re fine. It doesn’t fix his race car from last weekend and it certainly doesn’t fix his result, and I understand that,” Elliott said. “I hate it as much as he does. But it’s racing and we’re racing for wins. That’s a great problem to have.”

It remains to be seen how Keselowski chooses to work with Logano going forward. He did not comment Friday on Logano’s push for the teammates to move on, but Keselowski did post a photo on social media that showed damage to equipment in his car from the fire started in the crash.

Keselowski, the 2012 Cup champion but winless in 12 Daytona 500s, is in a contract year with Penske and probably can’t afford to feud with his teammate. Logano, also a Cup champion and the 2015 Daytona 500 winner, doesn’t have the same job security concerns.

Logano has been part of several skirmishes with various drivers over the years. The conflict has often escalated with rivals complaining Logano rarely takes responsibility and allows feuds to fester.

This time, Logano is pushing for a clean slate. He likened a problem with Keselowski to a marriage, where both sides must come to a resolution and move forward.

“It’s kind of the situation here, where I will be forced and he will be forced to work with me,” Logano said. “We’re still teammates. We will have to figure this out.”