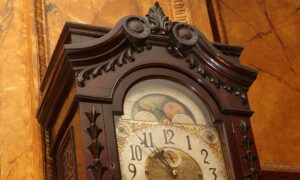 The Passing of Time During the Pandemic Confinement
0 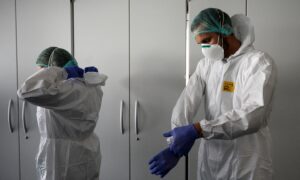 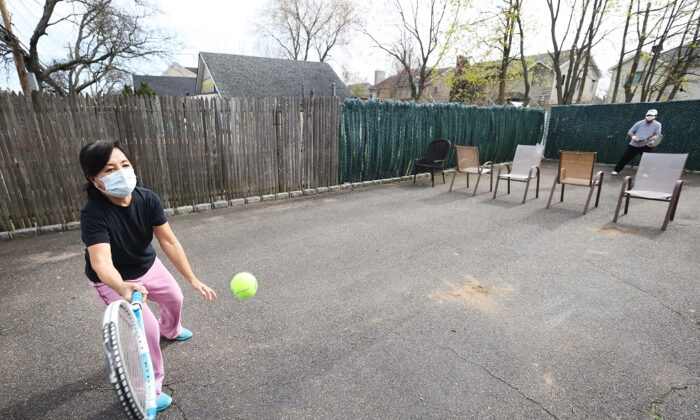 Ana Diaz, a nurse at Northwell Syosset Hospital, plays tennis with her husband Melanio on a makeshift court they created on the driveway of their home in Merrick, New York, on April 19, 2020. (Al Bello/Getty Images)
AMERICA

I know that a lot of people are eagerly awaiting the roll-out of the new Netflix compilation of all the White House pressers from the Coronavirus Task Force. I’m told that, thanks to the sponsorship of Hermes scarves, all 876 hours will go on-line at once, so those of us under virtual house arrest can binge watch it for the next month or so. Those with a premium account can opt for an edition that omits any questions from Jim Acosta.

Speaking for myself, I hope it comes soon, for it looks as though we may soon be allowed out of our houses again. I’ll like that, though I expect that there will be a period of adjustment. When you are in a dark room for a while and then go out into brilliant sunlight, the light is dazzling.

That’s one reason coming out of a movie theater on a sunny summer afternoon is so disorienting. You get acclimated to the tenebrous environment. I suspect something similar and even more disorienting when the Lockdown ends.

I wonder when the critical reassessments will start. That will probably depend on the state of the economy, though I would like to find a more emollient word for the pulsing “élan vital” that sustains us. “Economy” sounds abstract and somehow in opposition to human things, whereas in fact it is part of what makes human things possible.

An acquaintance of mine made what I think is an astute observation when he wrote that “Politicians and bureaucracies tend to respond to crises with theater. After 9/11 it was airport security theater. Following Corona it was lockdown theater. There’s some utility to it, but only some, there is much more hoopla.”

I agree, except for the “there’s some utility to it” bit. In my view, the TSA is 100 percent “airport security theater.” If we really wanted to be secure airline travel, we’d allow passengers to carry concealed weapons. A baddie pops up with a box cutter, pow, Mr. Smith in 11D puts his Beretta M9 to good use. No more baddie and the nice lady next to him gets to keep the box cutter as a souvenir.

How about lockdown theater? What good has it done? The main current of opinion favors the process if not necessarily the theater. In a particularly nauseating piece, even for The New York Times, our former paper of record notes today that the situation on the ground seems to be improving, but asserts that “The gains to date were achieved only by shutting down the country.”

I know that many people think that is the case, but there are some dissenting voices. The biostatistician Knut Wittkowski is one, and I recommend this interview (https://archive.is/0jB0M) as a primer on his thoughts about the subject.

Wittkowski has been the object of much abuse by those acting in, or producing, the Lockdown Theater, but it is worth noting that more and more bits of data are emerging to support his main contentions: 1. that the medical problems caused by the CCP virus, often known as the novel coronavirus, are respiratory illnesses; 2. that like all respiratory epidemics, this one follows a predicable course; 3. that one should respond by protecting the “elderly and fragile”; but 4. that massive self-isolation impedes the development of herd immunity and makes a “second wave” more likely.

Maybe he is all wet, maybe not. Since part of Lockdown Theater is that everyone has to play being an expert epidemiologist and talk knowingly about William Farr, R0, “patient zero,” and the like. It’s a bit like playing Ben Casey, if you remember him, or Dr. House if you’re a young ’un. You just bone up on a bit of the jargon, then mobilize it to heap contempt on anyone with whom you disagree politically. The best part is that not only do you get to sound like you know something about epidemiology, but also you get to imply that the object of your contempt is both wrong and a bad person for disagreeing with you.

Meanwhile Iran is on the case. Everyone knows that drinking camel urine is an effective treatment for respiratory illnesses caused by the CCP virus. But a pro-regime expert called Mehdi Sabili has the important advice that it should be warm. I am happy to be able to share this important advice with my readers.

Speaking as an American, though, it is a little embarrassing to be shown up so vividly by Iranian technology. I don’t mean their breakthrough treatment involving camels. That is important. But what I have in mind is their diagnostic technology, which puts the West to shame.

Everyone here is nattering on about the need for widespread testing. In my view, what matters most is widespread testing for people with antibodies to the virus, because that will tell us how lethal the illnesses caused by the virus really are. Still, if you want to know who is currently infected by the disease, the Iranians have that problem solved.

Just a few days ago on Iranian television, the Islamic Revolutionary Guard Corps (IRGC) demonstrated a device that “can detect a person infected with the coronavirus from 100 meters away.” Not only that, it can detect “an infected surface or individual in five seconds.” Unfortunately, a spokesman for the IRGC said that the technology would not be shared with Americans “until all sanctions are removed.” Worse luck.

There are some cynics who say that the device resembles the fraudulent bomb detecting wands disseminated by a British businessman. I have it on good a authority—it’s a unnamed source close to the situation—that the new device are not repackaged pseudo-bomb detectors. No, they are really repurposed Orgone Boxes purchased surreptitiously at an estate sale from a descendent of their inventor, Wilhelm Reich.