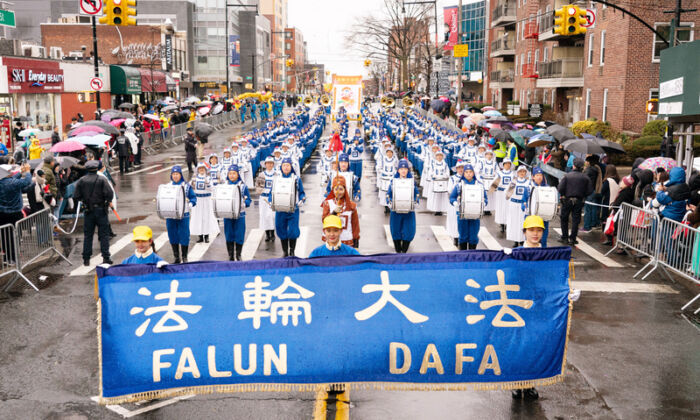 Despite some rain, spectators still crowded the sides of Flushing’s Main Street.

“Flushing’s New Year parade is the most beautiful and the largest one [in New York]. I come here to watch every year,” Michael Zhang told the Chinese-language Epoch Times.

“Rain can’t stop us,” said Zhao Litao and his mother, Marry Wu, adding that they had lived in the United States for 30 years and it was their family tradition to go out to watch the Flushing New Year parade.

Speaker of New York City Council Corey Johnson also attended the parade and spoke to media, wishing everybody a happy new year of the mouse. He added that the government is on alert for the new coronavirus, and asked New Yorkers not to discriminate against Chinese out of fear.

Chen added that she thought the dance put together by the Chinese spiritual group Falun Gong, which was invited to perform at the parade, was very attractive.

“It’s very pretty that they put the dance together [in the parade],” she said.

The dancers with Falun Gong were accompanied by the ‘Celestial’ or ‘Tianguo’ marching band, a dragon and a lion dancing team, waist drums, floats, and a section celebrating 350 million Chinese people having quit the Chinese Communist Party (CCP).

“We love Falun Gong people. They are telling you the truth in China and out of China,” another onlooker Mrs. Cai told the Chinese-language Epoch Times. “Their group in the parade is grand, and their words are the most powerful.”

On one of their big banners, people saw the message: “Congrats the 350 million Chinese who have quit the CCP!”

“CCP is spreading the philosophies of lying, being evil, and fighting with each other. Quitting the CCP is choosing to be kind and compassionate,” Wang Yankun, a Falun Gong practitioner, told the Chinese-language Epoch Times of the significance of the quitting CCP movement.

“I think it’s great that they are encouraging Chinese citizens to quit the CCP,” Paul Rathe, another New Yorker, told The Epoch Times’s sister media NTD Television after he watched the message pass by. “[The existence of communism] has been too long.”

In a repeat of ongoing attempts to harass the Falun Gong group, dozens of pro-Beijing people held large Chinese flags along the route of the parade, standing within the spectator crowd.

The group was led by Li Huahong, leader of a local communist front group in Flushing called the Chinese Anti-Cult World Alliance.

The group was denied from participating in the parade.

Last year, reporters from The Epoch Times and NTD Television were told by several flag-bearers that they were being paid $30 to $200 by Li to hold the flags.

In March 2019, an insider told the Chinese-language Epoch Times that Li was paid by the Tianjin City Political and Legal Affairs Committee, a Chinese government agency. Other sources have also suggested that Li receives funding from the Chinese authorities.