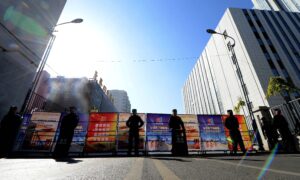 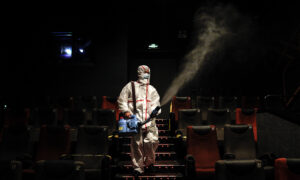 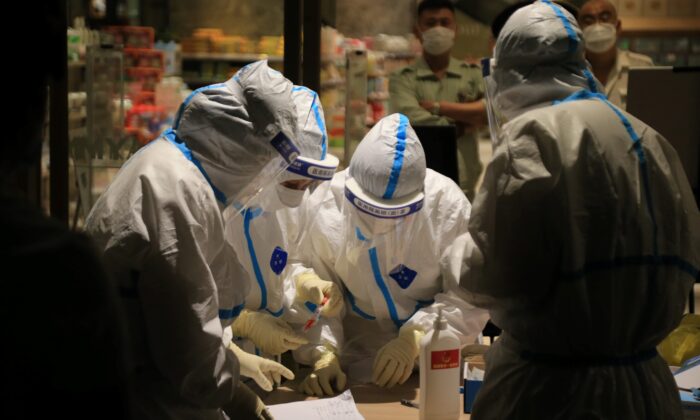 Health workers carrying out COVID-19 tests in a shopping mall in Dalian, in China's northeast Liaoning Province, on July 25, 2020. (STR/AFP via Getty Images)
INSIDE CHINA

Restrictive quarantine policies and the designation of more hospital beds in northeastern China’s Dalian city and the farwestern region of Xinjiang indicate that their local CCP virus outbreaks are severe, despite authorities publicizing limited information.

Urumqi is the capital of Xinjiang and home to a large population of Uyghurs. Local authorities locked the city down immediately after they announced a resurgence in mid-July. As new infections are diagnosed every day, the city is building its first makeshift hospital to treat COVID-19 patients.

Meanwhile in Ghulja city west of the capital, locals said the area was locked down on July 27 due to the outbreak, though local authorities didn’t announce any new cases. Residents in Kashgar, southern Xinjiang, also reported a lockdown on July 18 after the first diagnosed case was announced.

The outbreak in Dalian, in the northeastern province of Liaoning, has quickly spread to eight other cities in four provinces. Chinese vice premier Sun Chunlan dispatched the director of China’s National Health Commission to visit Dalian on July 24 to coordinate virus prevention efforts.

As authorities required all 6.9 million residents in Dalian to get tested for COVID-19, residents became panicked and cleared supermarket shelves.

The Liaoning provincial health commission announced on July 27 that 14 new COVID-19 patients were diagnosed, while 12 others were recognized as asymptomatic carriers. All of them are in Dalian.

Within the patients, there was a bus driver, taxi driver, restaurant owner, and barber.

On July 24, the day authorities in Changchun and Siping confirmed new positive diagnoses, director of the National Health Commission Ma Xiaowei arrived in Dalian to direct local authorities on how to handle the outbreak.

According to the commission’s press release on July 26, Ma ordered them to perform nucleic acid tests of every resident in Dalian within the following four days; isolate all diagnosed patients, asymptomatic carriers, and their close contacts at quarantine centers; and empty one hospital within 24 hours and use it as a dedicated COVID-19 hospital.

Dalian netizens recently shared videos showing people crowding in front of the nucleic acid testing sites. Due to the limited space, people couldn’t maintain social distancing and had to stand close to each other.

Ms. Liu is a cashier at a small-size supermarket. Because one diagnosed patient said he had shopped there on July 18, Liu and her colleagues were isolated at a hotel-converted-quarantine-center on July 22.

“They [officials] came to our store with a photo and asked us whether we knew that man. None of us did. But they then forced us to go to this quarantine center directly, and didn’t allow us to change our work uniforms or take anything,” Liu said.

Dalian authorities have attributed the virus resurgence to the local Kaiyang Seafood Company. An employee there told The Epoch Times that he and his family were isolated at a quarantine center and had to take COVID-19 tests every three days.

The employee said all staff had been tested for the virus on July 7 and 8—before authorities confirmed a new outbreak on July 23—but no one tested positive. He questioned the authorities’ claim that the company was the source of the outbreak.

From July 16 to July 27, the Xinjiang region health commission announced nearly 400 confirmed and asymptomatic carriers, almost all in Urumqi, the capital.

However, locals questioned the figures and said the real scale was likely underreported.

On July 25, Urumqi netizens posted online that authorities started building a makeshift hospital at the No. 2 Terrace in Toutunhe District, Urumqi. They shared videos of excavators and trucks working on the land.

The commission didn’t say how long it would take to finish construction. In Wuhan, where the virus first broke out, workers spent 10 days to build the makeshift Huoshenshan Hospital.

The commission said that all diagnosed patients were currently being treated at the No. 6 People’s Hospital in Urumqi. According to the hospital’s website, it has 800 beds and is dedicated to treating infectious diseases.

Urumqi was locked down immediately after authorities announced the first diagnosed patient in the new wave outbreak on July 16.

Since July 26 at midnight, residents of Ghulja city in northern Xinjiang said their city would be locked down beginning 8 a.m. July 27. Ghulja is about 420 miles west of Urumqi, and capital of Ili, a border prefecture to Kazakhstan.

From videos shared by netizens, residents could be seen crowding markets at night to shop for food and other necessities before the lockdown. The streets were empty the next morning, and people stayed at home.

Officially, Ghulja has not reported any diagnosed cases. But insiders shared with The Epoch Times on July 16 that travelers who had visited Ili were asked to take nucleic acid tests, suggesting that authorities were concerned people could contract the virus in Ili and spread it.