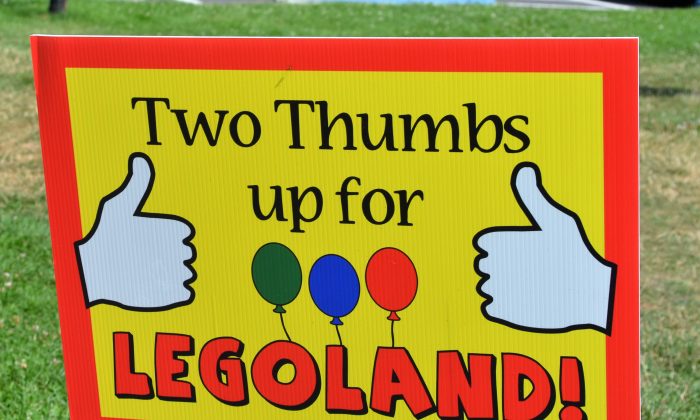 Sign at Craigville Park in support of the LEGOLAND New York in Goshen on July 16, 2016. (Yvonne Marcotte/Epoch Times)
New York

GOSHEN—Craigville Park in Goshen was on July 16 the scene of a genial gathering of locals who want to build grassroots support for LEGOLAND New York.

Organizer Kristina Barnes said the open forum on July 11 showed an organized and vocal opposition. “They knew each other, they were high-fiving, they were very out-spoken.”

She wants to send a different message to town officials. “Because the word is getting out and people are not afraid anymore to speak out, I think we are growing in number.”

Barnes, who lives in New Hampton, said people have responded. Most people she has talked to have positive things to say about the park coming to Goshen.

“I am blown away with the support.” Barnes said over 300 people have made positive comments on a LEGO website and over 600 have signed a petition in support.

She believes most residents in the area support the park or are undecided. The undecided ones are who she wants to reach, “not to sway them one way or another. Let’s just give them the facts.”

Magdalen Radovich-Roddey was undecided until she received enough information and wound up a supporter. The park will bring in more families and young people that the town needs to grow and flourish, she said.

Many rumors are circulating, according to those who attended—housing values will drop and crime will go up.

Keith Roddey, long-term resident and father of Village of Goshen Mayor Kyle Roddey, said he was impressed with the company’s work with autistic children since he has a relative who is autistic.

Roddey said many who oppose the project are part of one family. Their petition made accusations about crime which he called “sick rhetoric.”

Guy Harnett said that, with a major resort in the area, the state could improve the road system to accommodate more drivers. He recently took his family to LEGOLAND Florida and said there was no traffic problem. “It wasn’t on the streets, it wasn’t on the highways, it wasn’t on the back roads. We went there right around the peak time to get in.”

Harnett said there has been traffic congestion on major roads near Goshen for years. “They don’t want traffic to get worse. Now we have the ability to take care of the traffic problem that already exists. This is what the big ruckus is about.”

Phil Royal, director of community relations for LEGOLAND, delayed a flight home in Florida to attend the gathering. He intends to move to Goshen in mid-August. A welcome center will soon open for residents to “pop in just to have a coffee and talk about the project—opposition as well—anyone who has some questions.”

Katie Conklin came with her husband and son and said it was important to let LEGOLAND officials know there “are just as many, if not more, people who are in support of them coming and being part of our community as the people who are against them.”