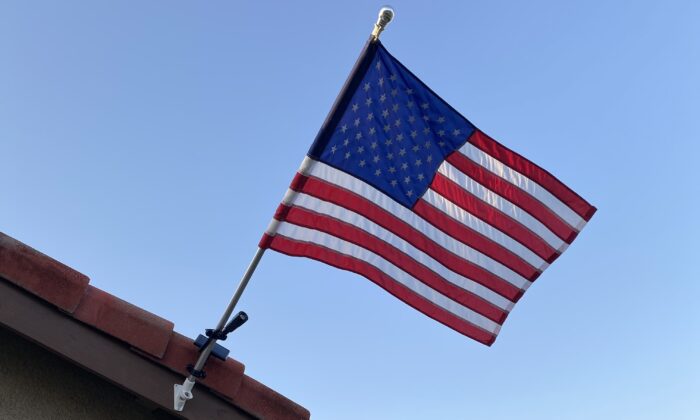 Jorge Cortez, a resident of Orange, Calif., has been supporting veteran service members by putting up U.S. flags in front of their homes since 2018. (Courtesy of Paula Zmudzinski)
Orange County Community

ORANGE, Calif.—An Orange County man has become a local hero for “painting” his community red, white, and blue in preparation for Memorial Day.

Jorge Cortez, a resident of Orange, California, and Loyal Knight Officer of the Orange Elks Lodge—a fraternal order with nearly a million members since its establishment in 1868—has been supporting veteran service members by putting up U.S. flags in front of their homes when they don’t have the ability to do so.

In a Facebook group titled “Flags Over Orange/Villa Park/Tustin,” Cortez—who is known as JC—posts stories about the veterans and their families to whom he gifts the flags. He has also been known to keep in check with those he has helped in the past to see if they need a fresh flag and adjustments to the position of the old one.

JC has been providing these flags since 2018 and is continuing to add more veterans to his service list daily.

As a father of six, JC has to schedule the installations during his precious spare time and sometimes brings his young daughter with him to help install the flags.

According to his Facebook page, the families he helps sometimes invite him in to share a piece of their story and show him around their homes—which he then posts online with their permission to commemorate their commitment to the country.

Paula Zmudzinski nominated her parents, June and Bob Shelly, to receive a flag after seeing what JC has been doing on social media.

“JC provides a wonderful service and tribute to our Veterans. … [My parents] are thrilled to have a flag,” Zmudzinski told The Epoch Times.

Her father, Bob, served in the U.S. Army—including the army band in Panama—for two years from 1956 to 1958 and then in the Army Reserves for four more years. The couple now has two daughters and eight grandchildren, two of whom are serving in the Navy.

JC’s support for veterans, active service members, and their families comes greatly appreciated this time of year as Memorial Day, May 30, approaches.

Another Orange County city, Newport Beach, is putting up 1,776 flags on display as a “Field of Honor” in Castaways Park for community members to admire and reflect on the sacrifice service members and first responders have made on Memorial Day.

The previous year, JC’s cousin, an active airman, was also honored in the Orange Field of Valor with a flag for his service.

In 2021, JC was nominated as one of 125 most influential people in the county by the Orange County Register after hanging over 100 flags in the community. In a Facebook post celebrating this feat, JC thanked several other people and organizations for their financial support for his cause, including the communities of the City of Orange, Home Depot, Orange Elks Lodge, and his family.

If you would like to learn more about or support JC’s work and other service members in your community, visit his Facebook group page.