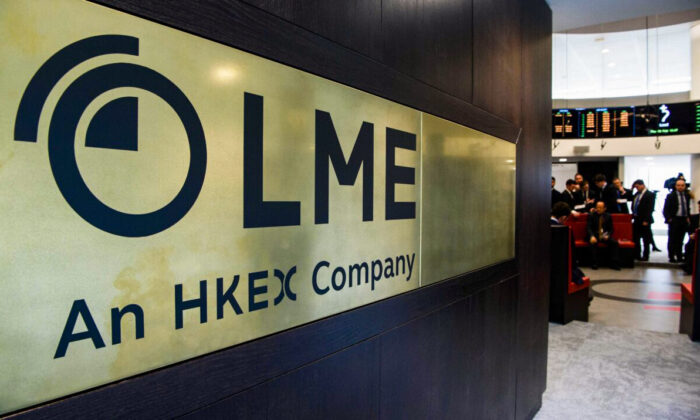 A sign for the London Metal Exchange (LME) on a wall by the new Ring, the open trading floor of the LME following its relocation in central London on Feb. 18, 2016. (Leon Neal/AFP via Getty Images)
Commodities

The London Metals Exchange (LME) said it was forced to cancel all nickel trades on March 8, after the contract spiked as much as 111 percent to more than $100,000 per tonne, before trading was halted.

The LME said the halt was due to the conflict Ukraine as well as the low-stock environment and high pricing volatility, and that the “current events are unprecedented,” adding that it was working to ensure the orderly functioning of the market.

“The suspension of the nickel market has created a number of issues for market participants which need to be addressed,” it said.

Trading on the Shanghai Futures Exchange was also halted on March 9, according to a report from Bloomberg.

Industrial buyers have been scrambling for the metal crucial for their products, causing the market to panic.

The Western sanctions on Russia, which is threatening the global metals supply, had lead to the biggest crisis to hit the 145-year-old exchange in decades.

Nickel is a key ingredient in making stainless steel and electric vehicle batteries, of which Russia’s Norilsk Nickel is the single largest producer.

The nation also produces 4 to 6 percent of the global supply of aluminum and copper.

Three-month nickel on the LME more than doubled to $101,365 a tonne before the LME halted trade.

Nickel had pared gains to $80,000 a tonne when trading was halted, up 66 percent on the day since start of trade and a staggering 177 percent since March 7.

The rise in nickel prices is putting pressure on a global manufacturing system that is already struggling to recover from the pandemic.

The uncertainty caused by the Ukraine crisis has added to an already bullish nickel market due to low inventories, which is now at 50 percent from what was in stock at the LME in October 2021.

“The LME will actively plan for the reopening of the nickel market, and will announce the mechanics of this to the market as soon as possible. The LME will give consideration to a possible multi-day closure, given the geopolitical situation which underlies recent price moves,” said LME CEO, Matthew Chamberlain.

It is suspected that the sudden price surge is due to short-covering by one of the world’s top producers.

Meanwhile, many position holders have been struggling to pay margin calls.

Some small industrial users have been caught in the fight between larger companies trying to acquire the metals, having taken positions to get physical delivery, but being hit with margins calls costing millions of dollars.

It is reported that two major players have been sparring to corner the global metals market, causing prices to quadruple over the past week, leading to the explosive gains.

One entity has control of between 50 and 80 percent of LME inventories, according to the exchange’s data.

Sources familiar with the matter, said Tsingshan Holding Group, in China, one of the world’s top nickel and stainless steel producers, had been building a short position in nickel since last year, betting prices would fall.

Prices rocketed as Tsingshan allegedly purchased large amounts of nickel shares to reduce those short bets and its exposure to costly margin calls.

The LME put an end to it by raising margin requirements for nickel contracts by 12.5 percent to $2,250 a tonne and suspending trading of nickel on all venues until potentially March 11, the earliest date LME said it expects to resume trading.

The cancellation applied to all trades made after midnight GMT until 8:15 a.m. on March 8, when trading stopped and it may be suspended for several days.

The last time this occurred was when a rogue Sumitomo trader attempted to corner the tin and copper market, causing trading to stop in the 1980s.

The International Monetary Fund has said there have been large deficits between supply and demand based on current production rates of various key metals.

Western countries are attempting to shift away from gasoline and diesel vehicles towards electric vehicles over the next decade, causing a massive increase in metals consumption and raising of prices.

According to UBS, the world is “ill positioned” to deal with any disruptions in the metals market, such as the Russian sanctions, which may now threaten green energy goals.