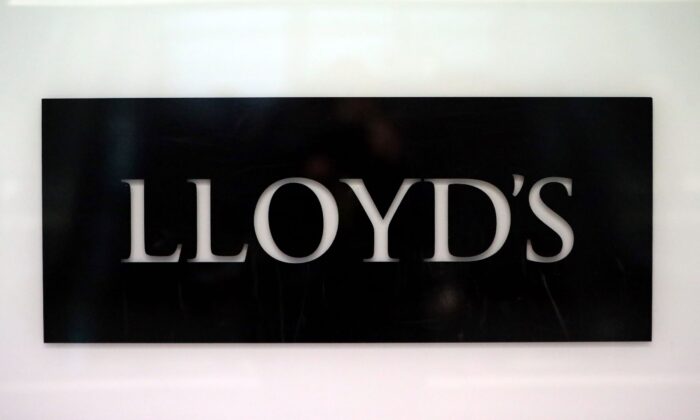 Signage is seen inside the Lloyd's of London building in the City of London financial district in London, Britain on April 16, 2019. (Hannah McKay/Reuters)
Business & Economy

LONDON—Lloyd’s of London is likely to be exposed to around 10 percent of the billions of dollars of insured losses from Hurricane Ida, its chairman said on Thursday, as the commercial insurance market reported a swing to a first-half profit.

Ida, one of the most powerful hurricanes ever to strike the U.S. Gulf Coast, hit Louisiana more than a week ago before moving northeast and causing intense flooding that killed dozens.

“Typically, if you looked at Lloyd’s’ exposure to those kinds of events, it would be about 10 percent of that number,” Bruce Carnegie-Brown told Reuters.

“Because of our market share in the U.S., we have a bigger exposure than we would, for instance, to continental flooding.”

Lloyd’s, which reports the combined results of its 100-odd syndicate members, recorded a pre-tax profit of 1.4 billion pounds ($1.93 billion) in the six months to end-June, versus a loss of 400 million pounds for the same period a year earlier.

Insurers suffered in 2020 due to hefty COVID-19 claims such as on event cancellation and trade credit cover. But after writing exclusions into contracts for the pandemic and raising premiums, they have performed strongly this year.

Lloyd’s has also made a push in recent years for its members to exit loss-making insurance lines.

It launched its first sustainability strategy last year and is trying to put more of its business online and improve its record on diversity.

“We are making great strides on all our strategic priorities which focus on improving the culture in the market, the Future at Lloyd’s digital transformation, and sustainability, climate and inclusion.”

Lloyd’s had a combined ratio of 92.2 percent, compared with 110.4 percent a year earlier. A level below 100 percent indicates an underwriting profit.

It said 80 percent of COVID-19 claims notified to date had been paid.