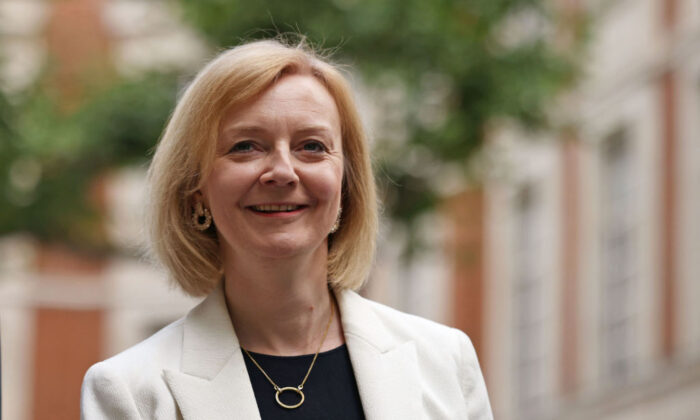 Truss, who is one of the last two contenders in the race to replace Johnson as prime minister, vowed to double down on support for Ukraine and to make President Volodymyr Zelenskyy the first foreign leader she will call if she becomes the occupant of Number 10 Downing Street.

In a statement issued on July 28, she said: “As prime minister I will be Ukraine’s greatest friend—following in the footsteps of Boris Johnson—and commit completely to ensuring [Russian President Vladimir] Putin fails in Ukraine and suffers a strategic defeat, and that Russia is constrained in the future.”

Truss said the conflict in Ukraine is “in the balance” and now is not the time to discuss concession and compromises.

She said that the UK needs to work with its Western partners and “carry on providing weapons, aid, and diplomatic support” to Ukraine.

She added, “I am the candidate the British people can trust on Ukraine, and that they can trust to defend our freedom at home and abroad.”

The foreign secretary also said she would update the Integrated Defence and Security Review in light of the conflict in Ukraine.

The Integrated Review, which set out the government’s vision for Britain’s role in the world over the next decade, was published in March 2021, before Russia’s invasion of Ukraine and NATO’s withdrawal from Afghanistan.

Truss said she would add a new and updated focus on China and Russia, as she believes the invasion of Ukraine and the Chinese Communist Party (CCP) regime’s growing influence demand a new approach to the UK’s security.

She has already pledged to raise defence spending to 3 percent of GDP by 2030.

Truss got a major boost to her campaign on July 29 as Defence Secretary Ben Wallace said she is the candidate who “will do best by defence of this nation.”

He also said Truss is the candidate who “understands the world in which we are now living” in terms of defence.

Wallace said Truss had “always been straight in her dealings with defence and consistent in her support” for soldiers, and that he welcomes “her plans to update the integrated review, reconsider the shape of our forces, and increase defence spending.”