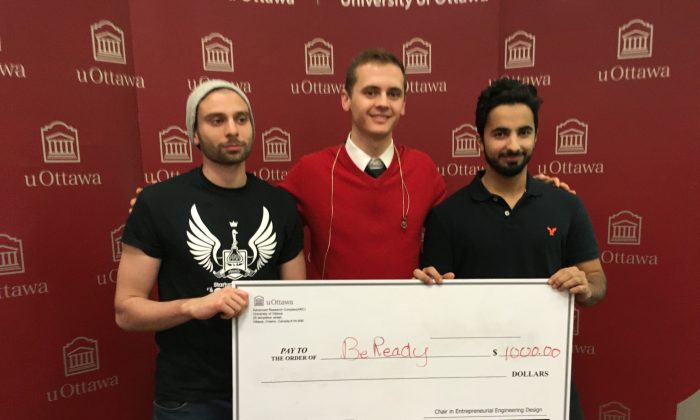 Living the Life of an Entrepreneur at Startup Weekend

OTTAWA—The entrepreneurial spirit is thriving after another successful Startup Weekend at the University of Ottawa where BeReady was crowned champion among 12 finalists on Sunday, Nov. 19.

Startup weekends and “hackathons” are leading catalysts for the creation of new companies. They provide networking and idea validation opportunities for entrepreneurs from mentors, volunteers, and fellow competitors. Canada is among the world leaders in number of companies started per capita and 99 percent of the country’s companies are small- and medium-sized enterprises that employ 10.5 million Canadians.

University of Ottawa entrepreneurship professor Stephen Daze says a startup weekend can teach some of the skills that are taught in a number of his classes.

“What we’re really trying to do is help people understand what the life in a startup might look like,” he said.

He compares it with playing hockey in that you’d never just teach somebody in a classroom how to play without getting on the ice.

“You need to fail, fall down, [you’re] not going to score a goal every time,” Daze said.

Entrepreneurship involves working long hours and getting an appreciation for that through 54 hours of a startup weekend is an excellent way to do it.

The three Ottawa U students bring strong technical backgrounds in engineering and programming and created a platform to connect job seekers with human resources professionals.

The trio learned that it’s much harder being an entrepreneur than it seems given how many iterations and discussions they went through.

“We went back and forth a lot, but because we did that we found the best solution for every single discussion we had,” Abdulkader said.

In terms of next steps, Daze says the biggest thing is to keep the momentum going and get further validation of the concept in the marketplace.

Fortunately, Slim, Abdulkader, and Ward-Bond have flexibility in their schooling and plan to keep working on BeReady.

“We think there is a real problem to be solved and potentially a real business to be launched around the BeReady solution,” said Michael Curran, president of Great River Media and one of the judges of the final pitches.

Issam Al-Dalati’s idea BestYums won two years ago. He’s the only one at an Ottawa hackathon to have gone solo, something that isn’t encouraged.

Back this year as a volunteer, Al-Dalati says he keeps coming back as a refresher for the entrepreneurial spirit.

To be in the presence of dozens of entrepreneurs working on their ideas can prove motivational. The friendly competition and positive vibe are said to be addictive.

“Those startup weekends, it’s only three days of your life and you might change your life a bit, pivot it,” Al-Dalati said.

Al-Dalati, a foodie, aims to disrupt restaurant reviews with BestYums. His site reviews restaurant dishes rather than the restaurants themselves.

He has opened his site in 60 cities around the world famous for their food, although he’s focused mainly on Toronto, Ottawa, and Montreal to get the service traction.

As an IT engineer, Al-Dalati got a better handle on the business and marketing sides from the mentors he worked with. “I’m still learning even though I launched it last year,” he said.

At startup weekends, rarely are new ideas pitched. But that’s not the point. There are still viable businesses to be built around making ideas better.

“Lots of ideas are repetitive,” Al-Dalati said. “The key part is how to make your app or your idea more unique. It’s something you should love and [that] reflects your personality touches in it.”

Startup Weekends all around the world are part of Global Entrepreneurship Week, which ran from Nov. 14 to 20. World leaders are known to get on board to fuel the economic engine of high-growth startups.

“Global Entrepreneurship Week is an opportunity to celebrate the hard work and invaluable contributions made by Canadian entrepreneurs and small businesses to our great country,” said Bardish Chagger, Minister of Small Business and Tourism, in a statement on Nov. 13.

The government doesn’t directly support or fund startup weekends, but it has taken steps to ensure there are various pots of money to support teams that do emerge with viable ideas through different interweaving programs.

“Governments are increasingly seeing entrepreneurship as a source of economic growth and job creation,” Daze said. “So there’s this perfect storm brewing where students are more acceptable of it, more interested in it.”

The attraction of being an entrepreneur is twofold for the BeReady founders. They prefer to run their own business as opposed to working in a big company. It may also be part of a cultural shift in the workforce given the technological advances.

“I want to own my own business. I don’t want to be a gear, I want to be the steering wheel,” Ward-Bond said.

For Slim, it feels necessary given the wave of automation changing the workforce. The jobs left to humans are going to be the ones too complex for machines.

“I feel like there’s a fear out there that propels people to get into the entrepreneurship or startup world,” Slim said. “Eventually everything is going to be automated and having your own startup is the way to go forward.”