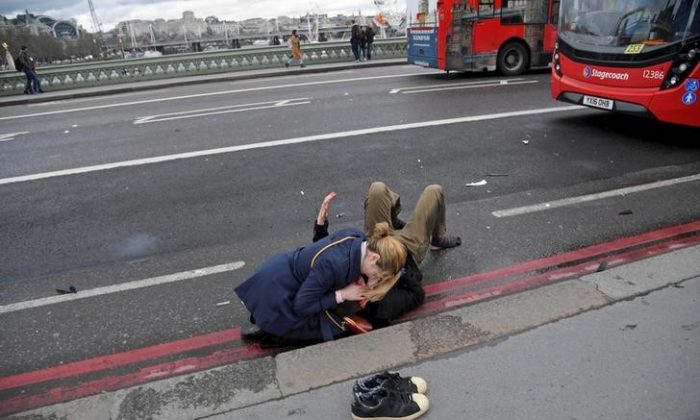 A woman assists an injured person after the attack on Westminster Bridge in London, on March 22, 2017. (Reuters/Toby Melville/File photo)
UK

LONDON—A man who mowed down pedestrians with a car near Britain’s parliament before stabbing a policeman ruined many lives in a matter of seconds, an inquest heard on Sept. 10, as it began with tributes to the victims and details of their last moments.

On March 22, 2017, Khalid Masood, a 52-year-old British-born convert to Islam, drove along a pavement on Westminster Bridge, killing four people, before stabbing to death an unarmed police officer in the grounds of Parliament. He was shot dead at the scene.

It was the first of five attacks in Britain last year that police blamed on terrorism, and coroner Mark Lucraft said the attack lasted less than two minutes.

“The lives of many were torn apart by 82 seconds of high and terrible drama,” he told the inquiry.

The inquest, which is expected to last several weeks, will seek to establish the circumstances surrounding the deaths of the four pedestrians and the police officer, Lucraft said.

A separate inquiry into Masood’s death will be held later.

The coroner held a moment of silence before hearing testimonials to the victims; a colleague of the policeman, Keith Palmer, paid tribute to his courage.

“Keith was that brave person who would stand his ground,” Police Constable Shaun Cartwright said in a statement that was read to the court. “I’m immensely proud to have called Keith my friend.”

Two of those killed by Masood’s rental car, American Kurt Cochran and Romanian Andreea Cristea, were tourists visiting London with their partners.

Stills from closed-circuit TV footage showed Cochran pushing his wife Melissa out of the way of the oncoming vehicle, in what was “apparently an act of instinctive courage,” the inquiry’s lawyer Jonathan Hough said.

Melissa sustained serious injuries but survived, and said in a statement read by her sister Angela Stoll that her husband’s “heroic actions that fateful day … saved my life.”

‘He was deliberately targeting pedestrians’

In testimony from Metropolitan Police officer John Crossley, the inquiry heard that Masood’s car may have reached 41 mph while on the sidewalk.

“It is my belief that Masood acted alone,” he told the court. “He was deliberately targeting pedestrians.”

Several of the victims’ relatives temporarily left the court while CCTV footage of the attack was played, after Lucraft warned that the images would be distressing.

Leslie Rhodes, a retired window cleaner, died after being dragged under the car for more than 30 meters (about 100 feet), the court heard, while Aysha Frade was walking with her back to the car when it knocked her under a bus.

Her husband, John, said she had been worried about security after her office moved to the area, but her family had tried to reassure her.

“It causes myself … excruciating pain to think of Aysha in the past tense,” he told the inquiry. “In truth, it still doesn’t feel like she has gone.”