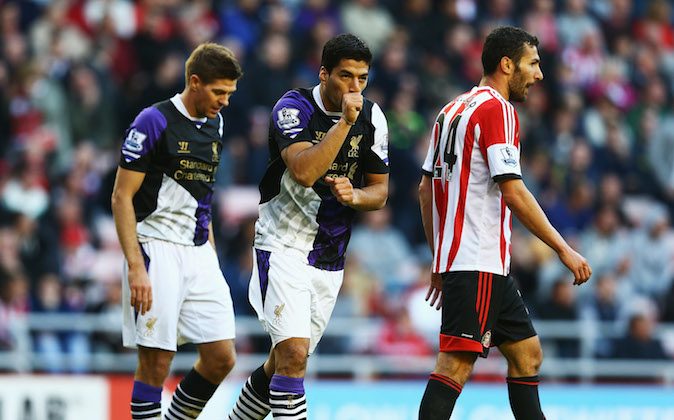 Luis Suarez of Liverpool celebrates his second goal during the Barclays Premier League match between Sunderland and Liverpool at the Stadium of Light on September 29, 2013 in Sunderland, England. (Photo by Matthew Lewis/Getty Images)
Soccer

Here is an AP article of the match.

Liverpool has scored 23 goals in its last seven games to cement its tag as the great Premier League entertainer — and the strikers at the center of the scoring spree have their eyes on a record.

With 47 goals between them this season, Luis Suarez and Daniel Sturridge are only eight behind the Premier League best for a strike combination — set by Peter Beardsley and Andrew Cole for Newcastle during the 1993-1994 campaign.

That haul was achieved when there were 42 games in a league season.

Suarez and Sturridge have eight games to break the record, starting with Sunderland on Wednesday.