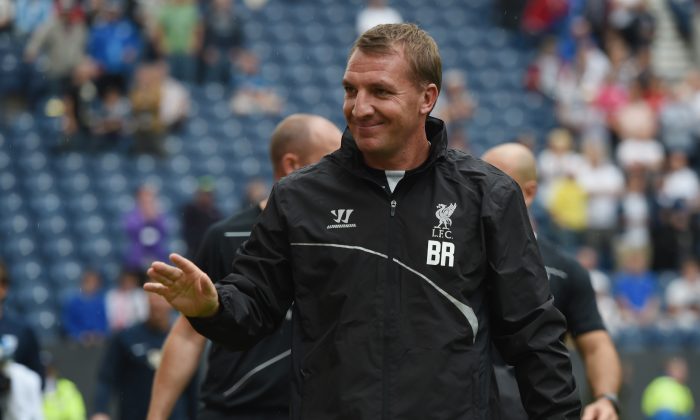 Liverpool and Olympiakos are set to face off in an International Champions Cup 2014 match on Sunday, July 27.

The game will be broadcast on Sky Sports 1/HD, Sky Go in the United Kingdom, as well as Nova Sports 1 in Greece.

At a press conference this week, Liverpool boss Brendan Rodgers made it clear that he wants to win a trophy for Liverpool this coming season.

Rodgers said: “Our expectancy this season is to win a trophy. That is what we’ll be looking to achieve this year.

“My focus when I signed my first contract was purely to get us into the Champions League because we felt that’d put the club back where it belonged at that level and give us greater resources as a football club. We’ve achieved that goal.

“Now, as the philosophy is starting to become defined in the team, the next goal is for us to win a trophy.

“The most important thing for me as a coach is continuous improvement. It’s very important that on the back of a good season where we arrived in the top four and just missed out on the title, we can go and push on again.

“Success for us is a moving target – we’ve got to keep moving, keep stretching ourselves and the expectancy of Liverpool is to win. That’s what we’ll look to do this season.”

Rodgers also spoke of Liverpool’s global appeal and the increasing popularity of soccer in America.

“We were all probably taken aback by the reception we received when we arrived at the hotel – the number of supporters outside was incredible,” Rodgers said.

“Having been at the club for two years, it doesn’t surprise me. The scale of the club worldwide and the support base it has is phenomenal – and that’s something that makes you very proud and privileged to be the manager of Liverpool.

“Football in America has very much caught on, especially on the back of the World Cup. Over the years, the quality of the football the USA team are providing has been improving, as you saw in the World Cup.

“There is a great coaching programme that is going on here in the country. They’ve made big progress in the last 15 years – and I think in the next 15 years they can make a similar progress.

“The notion of football has definitely changed in America and is getting much more popular,” Rodgers concluded.

Here are the current standings for the International Champions Cup: