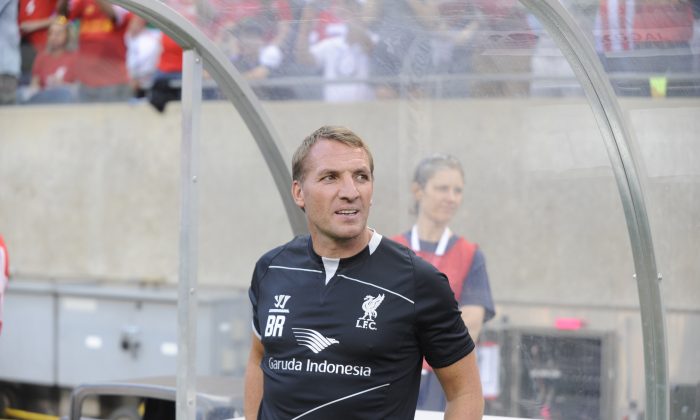 Liverpool Coach Brendan Rodgers before the start of the match against the Olympiacos FC in the International Champions Cup 2014 on July 27, 2014 at Soldier Field in Chicago, Illinois. (Photo by David Banks/Getty Images)
News

Liverpool and Manchester City are set to face off in an International Champions Cup match on Wednesday, July 30.

“I’m not too bothered about when we play them,” he said to reporters in New York.

“You have to play every team twice, that’s the reality.

“For us, we’re happy to play them at the beginning of the season.

“We’re playing in this tournament [International Champions Cup] and there are really good teams in it.

“When you’re the champions, you rightly go into the next season as the favorites.

“They were the champions last year, the most consistent team – they pipped us by a couple of points – so they will be the benchmark for next season,” he added.

Rodgers also had good things to say about America.

He said: “We were very well received when we came over here two years ago. It was my first pre-season and I absolutely loved it – it provided a great platform for our work.

“The service in America is incredible. The hotels, the training grounds – people can’t do enough for you. I think that’s what attracts people here – the warmth you receive when you get here.

“We as a football club have an obligation because we are Liverpool and are one of the biggest football clubs in the world. There is no hardship to come out here and reach out to some of our great supporters.

“Our concentration is always football, but we have an obligation to support and meet a lot of our great supporters over here.

“The American game has definitely improved as well. We have visited some excellent facilities since we’ve been here. We were at Princeton today – a brilliant facility and the pitches were superb.

“It provides a great base for teams to come, work on the field and hopefully will provide a great platform for the season going forward.”

See the table below.