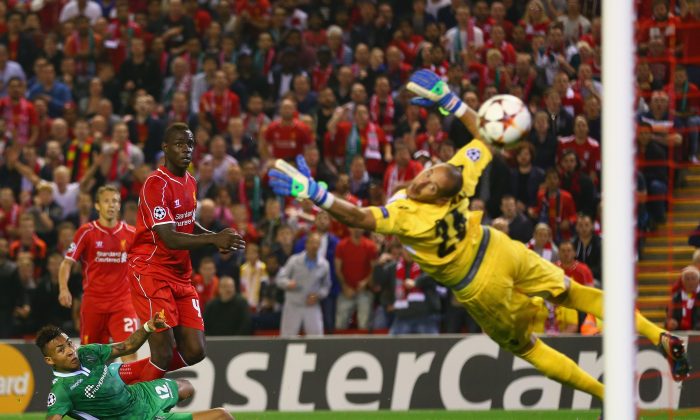 The clock struck midnight for Cinderella club Ludogorets Razgrad as Liverpool captain Steven Gerrard converted a 93rd-minute penalty for a 2–1 win at Anfield on Tuesday.

Liverpool’s return to Champions League after a five-year absence saw the English side experience those all-too-familiar highs and lows of European football nights.

The Reds were awarded an injury-time penalty, which Gerrard converted, but just two minutes earlier—also in second-half injury time—Ludogorets equalized and it looked like Liverpool had thrown away a valuable two points.

The small club from Bulgaria must have thought they had pulled off an astonishing result. It would have been a massive disappointment for Liverpool and could have severely damaged their Champions League aspirations.

The Reds were coming off a disappointing 1–0 home loss on Saturday in English Premier League action to Aston Villa. Again on this night, they were frustrated time and again in front of goal until Mario Balotelli’s breakthrough.

Balotelli gave Liverpool the lead in the 82nd minute right after a Ludogorets counterattack was foiled.

“[It] never went his way for long periods,” Gerrard said about Liverpool’s new striker. But Balotelli kept working and he converted his difficult chance well by battling through two defenders before deftly sending the ball past Ludogorets keeper Milan Borjan.

“When you got his ability, you only need one chance,” Gerrard said.

Ludogorets were not in awe of the occasion. They came up with an effective counterattack in the second half and threatened Liverpool on a couple of occasions.

In the 72nd minute, Roman Bezjak hit the post, but the rebound was fired well wide.

“They caused us problems on the counterattack,” Gerrard said.

The matchup was a contrast of pedigree in European football. Ludogorets was founded in 2001 and was making its first appearance in the Champions League group stage. On the other side of the pitch, Liverpool has won Europe’s top club football competition five times. The club has been in existence since 1892.

Ludogorets was also without its two top goalkeepers and signed Canadian keeper Borjan on Sunday. Borjan was not associated with any club at the time. He featured Sept. 9 in a friendly against Jamaica that Canada won 3–1 at BMO Field in Toronto.

Borjan did what was expected of him except for his mistake in injury time. He failed to deal with a routine ball that was passed back to him and then fouled Liverpool’s Javi Manquillo who had rushed to pressure the keeper.

It would be hard to argue that a penalty was not warranted and Borjan’s night ended in disaster.

The three points was crucial for Liverpool as they need to keep pace with last year’s Champions League winner Real Madrid. The big-spending side from Spain hammered FC Basel of Switzerland 5–1.