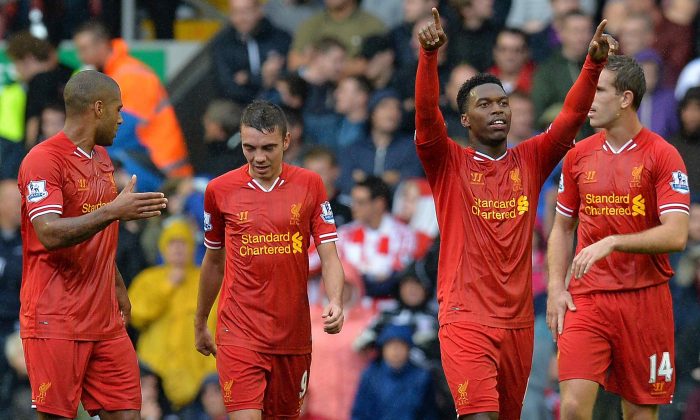 Liverpool’s Daniel Sturridge scored the first goal of the new English Premier League season after 37 minutes to give his side a thoroughly deserved 1–0 opening day victory over Stoke City.

Brendan Rogers’ team created a hatful of chances and was denied time after time by Asmir Begovic who had an outstanding match in the Stoke goal. Jon Walters had a golden opportunity to snatch a point for the visitors, only to see his penalty saved by Liverpool debutant Simon Mignolet.

These days, Anfield is considered to be the center of the football universe only by die-hard Liverpool supporters, but Saturday lunchtime at the famous old ground saw the 2013-14 Premier League season finally kick off. We have already seen several weeks of preseason friendly fixtures as well as a host of qualifiers for the UEFA Champions and Europa Leagues, but at last it was the “real McCoy.”

Liverpool were, of course, missing star striker Luis Suarez who still has six games of his suspension to serve for the ignominious biting incident against Chelsea last season. However, the Uruguayan’s loss is Sturridge’s gain and a heaven sent chance for the young England striker to have a run in the starting XI and show what he can do.

Pepe Reina has departed to Napoli to link up with his old mentor Rafael Benitez, and so new signing Mignolet from Sunderland kept goal for the Reds.

Tony Pulis has been synonymous with Stoke City and their direct, physical style of play for the last few years, but time was called on his tenure in the dugout after a disappointing season in which the Potters scored fewer goals away from home (only 30) than each of the three teams that were relegated.

Their new manager is the much-traveled Mark Hughes who takes over his fifth different Premier League club. But, with only one new signing, Dutch left-back Erik Pieters, there was little chance of any significant change to the traditional Stoke style. This indeed proved to be the case with all their best moments coming from balls floated into the penalty area from set plays.

Liverpool started as if they were desperate to atone for last season’s disappointing seventh position, the second year in a row they had finished behind neighbors Everton, which had not happened since before most of the current supporters were born.

Sturridge found the net with a good header from a free kick, but was just offside, and Toure hit the bar, also with a header, before a quarter of an hour had passed. It was a lively start to the season’s opening clash with Stoke also coming close when a Robert Huth volley hit the woodwork.

Mignolet made no attempt at a save being seemingly put off by the towering presence of Peter Crouch in the 6-yard box in front of him. In fact, the Belgian international looked decidedly nervous on several occasions, particularly with the ball at his feet when a decisive clearance was required.

By contrast, Begovic made several outstanding close range stops to keep the game scoreless. It was not until Sturridge tried his luck from further out that the breakthrough was made.

On 37 minutes, the former Chelsea man at last found the back of the net with a crisp left footer from three yards or so outside the area that went through the legs of Robert Huth and past Begovic’s outstretched fingertips into the bottom corner. The Bosnian was in such outstanding form that one suspect he would have saved that as well, had it not come at him through the defender’s legs which is always difficult for a keeper.

Stoke did manage to get some possession and press for an equalizer towards the end of the first half. A fine shot on the turn from Walters gave Mignolet the opportunity to show what he can do and the Belgian made an excellent save. Then in first half stoppage time, a goal-line clearance was required to preserve Liverpool’s lead following a Stoke corner.

Liverpool’s passing and build up was a joy to watch in the early part of the second half, but the combination of some profligate finishing and more heroics from Begovic meant the score remained the same. A particularly memorable moment from the Bosnian was when he just got his fingertips to a fierce drive from Jordan Henderson and deflected the ball onto the inside of the post and out to safety.

Hughes’ final throw of the dice was the introduction of Liverpool old boys Jermaine Pennant and Charlie Adam. The pair certainly gave the Potters more ideas going forward, yet it was the old faithful ball into the crowded area that resulted in Daniel Agger’s hand ball and the subsequent penalty.

Walters scored three and missed two from the spot last season so he is far from being the most reliable of penalty takers. His shot lacked power and Mignolet guessed the right way. Nonetheless, the shot was going inside the post to the keeper’s right and it was a decent save that will do his confidence a power of good. From looking the most nervous player on the pitch for over half an hour, Mignolet ended up saving two points for his side.

From the Stoke perspective, one might say that Begovic’s display alone deserved the reward of a point. Yet that would have been hard on Liverpool who played some lovely football and really deserved their win.

However, if the Reds are going to make a serious push for a Champions League place this season, then they absolutely must convert the many chances the create into goals and finish teams off.

All in all this was a thoroughly entertaining spectacle to start the new Premier League season.