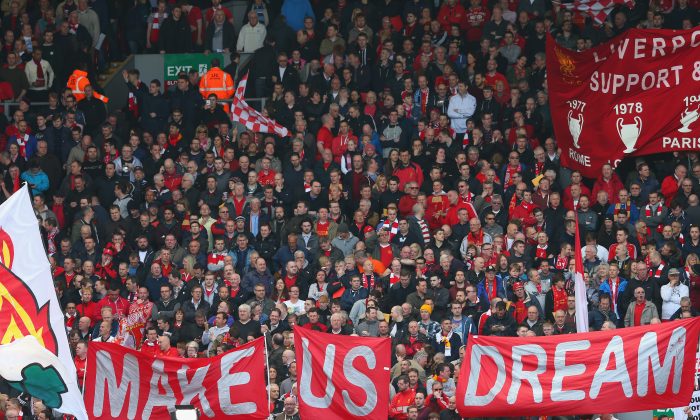 Liverpool fans on the Kop prior to the Barclays Premier League match between Liverpool and Manchester City at Anfield on April 13, 2014 in Liverpool, England. (Alex Livesey/Getty Images)
Soccer

Liverpool Can Dare to Dream

Liverpool’s 3–2 triumph over Manchester City on Sunday in the English Premier League’s biggest game of the season so far has put the Merseyside giants within touching distance of a first Premiership title.

The Reds’ last league title was all of 24 years ago before the inception of the Premier League. If Liverpool wins their remaining four games, they will finish the season with 89 points. Manchester City can now only manage 88 if they win all of theirs. Chelsea will also have something to say about the outcome as they are still very much in the mix, following their 1–0 away win over Swansea. The Blues visit Anfield in a fortnight’s time.

However, the timing of that fixture couldn’t be better from Liverpool’s perspective, as the match will be sandwiched between the London club’s two Champions League semifinal ties against Atletico Madrid.

Liverpool was certainly irresistible for the first 35 minutes or so against City with Luis Suarez, Daniel Sturridge, Philippe Coutinho, and Raheem Sterling, breaking forward with breathtaking speed and artistry.

Sterling was most impressive of all. He has improved by leaps and bounds this season and the way he wrong-footed Joe Hart and the City defenders to score his team’s first goal, following an incisive pass from Suarez, was a joy to behold.

It is no wonder England manager Roy Hodgson was smiling. The Reds were rampant and grabbed a second through an excellent Martin Skrtel header from Steven Gerrard’s corner.

It was an emotional day at Anfield, being FA Cup semifinal day and therefore the 25th anniversary of the Hillsborough disaster, which claimed the lives of 96 Liverpool supporters. You could literally feel the emotion surging in waves through the passionate sea of red around the ground and it is not surprising that the home side took the field with the adrenalin pumping.

To be fired up is one thing, but to have genuine belief that you have a right to be crowned the best team in the land is quite another. Over the last quarter of a century, this is something Liverpool has lacked.

Since his arrival from Swansea, manager Brendan Rodgers has quietly gone about his business, not only strengthening every part of the team, but instilling the players with that aforesaid belief where it was not previously in evidence.

When interviewed by Fox Sports at the end of the match, Rodgers stated with pride that, following City’s recovery and dominance in the second half, Liverpool’s ultimate victory “showed the character in this group…so much spirit and so much quality.”

Liverpool have certainly improved in all departments this season. Belgian international goalkeeper Simon Mignolet is still guilty of the odd flap, but also regularly pulls off stunning saves. He contributed one of these to preserve his team’s two-goal advantage going into the break when City finally found their rhythm in the last 10 minutes of the first half.

Glen Johnson has always looked good going forward, but was sometimes prone to elementary defensive errors in the past—not any more, as he looks to be at the very top of his game.

Joe Flanagan is getting better all the time and will continue to do so. Skrtel has also eliminated many of the errors from his performances and stepped into the role vacated by Jamie Carragher at the heart of the defense. He leads the league in goals by a defender with seven.

Daniel Agger and Mamadou Sahko are currently competing for the second center-back place, which is a great position for Rodgers to be in as both players have a vested interest in cutting the mistakes out of their game.

Sahko was rather hot-headed at times against City and could easily have given away a penalty with a flying tackle on Edin Dzeko, who would have been cut in half had he not jumped to avoid contact. Don’t be surprised, therefore, if Agger gets another chance in the next game.

Gerrard desperately wants a Premiership winner’s medal before ending his career and remains the heart and soul of the club. What has changed is the support he is getting in midfield from the likes of Jordan Henderson and Coutinho. Henderson can win the ball and sit tight while Coutinho orchestrates those lightening forward rushes with Sterling and the two front men.

The skipper no longer has to do everything as frequently appeared to be necessary over the last decade. The club may still envy the depths of the squads of City and Chelsea, but they do now have able deputies in the likes of Joe Allen, Lucas Leiva, and Victor Moses.

Yet, when all said and done, winning games of football is all about putting the ball in the back of the net. Suarez and Sturridge have done that 29 and 20 times respectively in the Premier League this season. This impressive strike rate is a major reason for the team’s success.

By comparison, Yaya Toure (18) and Sergio Aguero (15), Manchester City’s two leading scorers, have only 33 between them.

Let us not forget also that Suarez did not even play a league game until the end of September due to his 10-match ban for biting. The Uruguayan is the shining light of the English Premier League when he concentrates on playing football.

But that dark side to his character—some might say a complete lack of sportsmanship—remains a concern as he should have been sent off for a blatant dive after having picked up a yellow card early in the first half.

Manchester City has more steel these days and were never going to capitulate in the manner of Arsenal or Tottenham, who were roundly demolished at Anfield. They turned things around in the second half with David Silva being his magnificent self and James Milner making a huge impact when introduced as a substitute.

City drew level and had chances to go ahead and win. The best opportunity came when substitute Aguero, returning from injury, fired a delightful ball across the 6-yard box with Silva sliding in. The Spaniard could only brush it wide with the bottom of his studs. Any sort of proper contact and it would surely have been a goal.

Suarez not being sent off for a blatant dive was not the only slice of luck enjoyed by Liverpool. Skrtel blatantly cleared a City corner with his forearm.

Sure, there were half a dozen players all jumping for the ball, but spotting those type of infringements is what the officials are there for.

All but the most one-eyed Liverpool fan would have to admit that the Reds enjoyed more than their fair share of luck on Sunday, and that Manchester City was unfortunate not come away with at least a point.

Some may say that the Liverpool faithful have suffered enough over the last quarter of a century, that their time has finally come again, and they deserve some luck if only for the wonderful entertainment they have provided throughout this season.

“The expectancy of this football club is a challenge every day,” said Rodgers. It is a challenge that has proved too much for his many predecessors in the long years since Liverpool’s last league title. That he has managed to rise to that challenge over the last 18 months or so, when so many before him have failed, is very much to his credit.

At the final whistle, the victorious Liverpool team went into a huddle where a highly emotional Gerrard literally screamed at them that they could take the title.

Gerrard was still emotional when interviewed a few minutes later, but his statements for public consumption were considerably more cautious. While admitting that this was “such a big result for us,” he insisted that his team must “not get carried away with that result,” but must “stay calm and focused.”

The interview concluded with the question “Can you dare to dream?” The Liverpool and England captain answered “Not yet.” But I’ll bet he is.