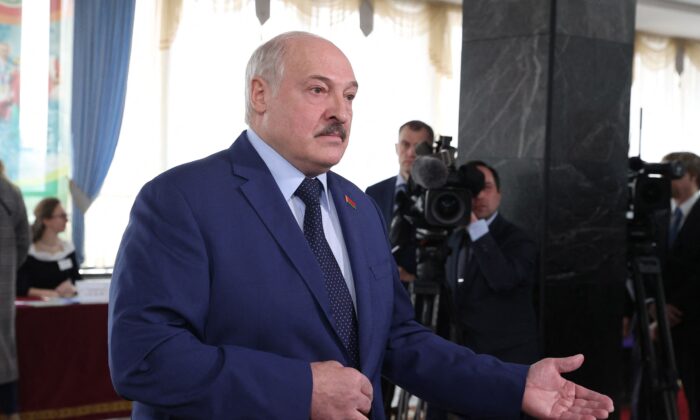 Belarus President Alexander Lukashenko speaks to the media after casting his ballot in the referendum on the constitutional amendments at a polling station in Minsk on Feb. 27, 2022.(Sergei Sheleg/BELTA/AFP via Getty Images)
Russia-Ukraine War

The latest on the Russia–Ukraine crisis, Feb. 27. Click here for updates from Feb. 26.

A referendum in Belarus on Sunday approved a new constitution ditching the country’s non–nuclear status at a time when the former Soviet republic has become a launch pad for Russian troops invading Ukraine, Russian news agencies said.

The agencies cited the Belarus central elections commission as saying 65.2 percent of those who took part voted in favor. The result came as little surprise, given the tightly controlled rule of President Alexander Lukashenko.

The new constitution could see nuclear weapons on Belarusian soil for the first time since the country gave them up after the fall of the Soviet Union.

It raises the stakes at a time when Lukashenko has fallen behind Russian President Vladimir Putin’s military assault on Ukraine after earlier playing an intermediary role between the two neighbors.

The West has already said it will not recognize the results of the referendum, which is taking place against the background of a sweeping crackdown on domestic opponents of the government. According to human rights activists, as of Sunday, there were more than a thousand political prisoners in Belarus.

Ukraine’s Interior Ministry says 352 Ukrainian civilians have been killed during Russia’s invasion, including 14 children. It says an additional 1,684 people, including 116 children, have been wounded.

The ministry’s statement Sunday does not give any information on casualties among Ukraine’s armed forces.

Russia has claimed that its troops are targeting only Ukrainian military facilities and says that Ukraine’s civilian population is not in danger.

Russia has not released any information on casualties among its troops. The Russian Defense Ministry acknowledged on Sunday only that Russian soldiers have been killed and wounded, without giving any numbers.

Satellite imagery taken on Sunday showed a large deployment of Russian ground forces including tanks moving in the direction of the Ukrainian capital of Kyiv from approximately 40 miles away, a private U.S. company said.

The images released by Maxar Technologies Inc. showed a deployment comprised of hundreds of military vehicles and extending more than 3.25 miles, Maxar said.

The convoy was situated northeast of the Ukrainian city of Ivankiv and contained fuel, logistics, and armored vehicles including tanks, infantry fighting vehicles, and self-propelled artillery, it said.

The satellite images also showed damage caused by recent airstrikes on the Antonov airport in Hostomel, and heavy fighting in and near the airport, Maxar reported.

U.S. citizens should consider leaving Russia immediately on commercial flights, the State Department said on Sunday, citing an increasing number of airlines canceling flights and countries closing their airspace to Russia after its invasion of Ukraine.

It has asked U.S. citizens to have “a contingency plan that does not rely on U.S. government assistance.”

BP is abandoning its stake in Russian oil giant Rosneft in an abrupt and costly end to three decades of operating in the energy-rich country, marking the most significant move yet by a Western company in response to Moscow’s invasion of Ukraine.

Rosneft accounts for around half of BP’s oil and gas reserves and a third of its production and divesting the 19.75 percent stake will result in charges of up to $25 billion, the British company said, without saying how it plans to extricate itself.

“I have been deeply shocked and saddened by the situation unfolding in Ukraine and my heart goes out to everyone affected. It has caused us to fundamentally rethink BP’s position with Rosneft,” BP Chief Executive Bernard Looney said.

The highest U.N. court on Sunday confirmed that Ukraine has filed a suit against Russia, saying Russia’s claim it invaded Ukraine to prevent a genocide is false and asking judges to order “provisional measures” to protect Ukraine.

Ukraine’s President Volodymyr Zelensky had said earlier on Sunday he had filed the suit at the International Court of Justice, also known as the world court. In a statement, the court confirmed it has received Ukraine’s complaint. It did not say when the case would be heard.

The European Union will shut down the bloc’s airspace to all Russian planes and will ban Russian state media outlets Russia Today and Sputnik, according to the head of the European Commission.

The EU will be closed down to Russia-controlled, -owned, or -registered aircraft, including the “private jets of oligarchs,” said European Commission President Ursula von der Leyen on Sunday.

At the same time, the EU will suspend “the Kremlin’s media machine in the EU” by banning state-owned Russia Today, Sputnik, and their subsidiaries. Those outlets, she said on Twitter, “will no longer be able to spread their lies to justify” the Russian invasion in Ukraine.

In a sign of de-escalation, Ukrainian officials said they will meet with their Russian counterparts near the Ukraine-Belarus border as Russian President Vladimir Putin said he’s putting his nuclear forces on high alert.

Ukrainian President Volodymyr Zelensky said that the Kyiv government agreed to talks with Moscow on the border. It’s not clear if Zelensky will attend the meeting.

“We have agreed that the Ukrainian delegation will meet with Russian without prior conditions on the Ukrainian-Belarusian border, in the area of the Pripyat River,” Zelensky said on social media Sunday.

Zelensky, who is said to still be in Ukraine, added that Belarusian President “Alexander Lukashenko took responsibility for the fact that at the time of the departure, negotiations, and return of the Ukrainian delegation, all planes, helicopters, and missiles placed on the Belarusian territory will remain on the ground.”

Putin put his country’s nuclear deterrence forces on high alert on Sunday, announcing the move in a televised meeting with top ministers, as Russian troops and tanks continue to wage a conflict in Ukraine.

“Western countries are not only taking unfriendly actions against our country in the economic area. I’m speaking about the illegitimate sanctions that everyone is well aware of. However, the top officials of the leading NATO countries also make aggressive statements against our country as well,” Putin said on Sunday, according to state-run media.

While hundreds of thousands of refugees are leaving Ukraine amid Russia’s attack on the country, some Ukrainian men and women are returning home from across Europe to help defend their homeland.

Poland’s Border Guard said Sunday that some 22,000 people have crossed into Ukraine since Thursday, when Russia invaded the country.

At the checkpoint in Medyka, in southeastern Poland, many were standing in a line early Sunday to cross into Ukraine.

“We have to defend our homeland. Who else if not us,” said a mustachioed man in front of a group of some 20 Ukrainian truck drivers walking to the checkpoint to enter Ukraine. They came from across Europe to return to Ukraine.

Members of the group declined to give their names, or only gave their first names, citing their security and that of their families.

Street fighting broke out in Ukraine’s second-largest city and Russian troops squeezed strategic ports in the country’s south Sunday, advances that appeared to mark a new phase of Russia’s invasion following a wave of attacks on airfields and fuel facilities elsewhere in the country.

The capital, Kyiv, was eerily quiet after huge explosions lit up the morning sky and authorities reported blasts at one of the airports. Only an occasional car appeared on a deserted main boulevard as a strict 39-hour curfew kept people off the streets. Terrified residents instead hunkered down in homes, underground garages, and subway stations in anticipation of a full-scale Russian assault.

Russian troops have pushed into Ukraine’s second-largest city, according to a regional official.

Russian troops approached Kharkiv, about 12.4 miles south of the border with Russia, shortly after Moscow launched its invasion of Ukraine on Thursday. But until Sunday, they remained on the outskirts of the city of 1.4 million without trying to enter while other forces rolled past, pressing their offensive deeper into Ukraine.

Early Sunday, Russian troops moved in and were engaged by Ukrainian forces, said Oleh Sinehubov, the head of the Kharkiv regional administration, who told civilians not to leave their homes. He gave no further details.

Austria and Italy are joining a growing list of European countries in closing their airspace to all Russian aircraft as the West ramps up pressure on Russian President Vladimir Putin for ordering an invasion of Ukraine.

Several other European countries, including Germany, the Czech Republic, Poland, Slovenia, Estonia, Latvia, Lithuania, Romania, and Luxembourg have also announced they are closing their airspace to Russian planes.