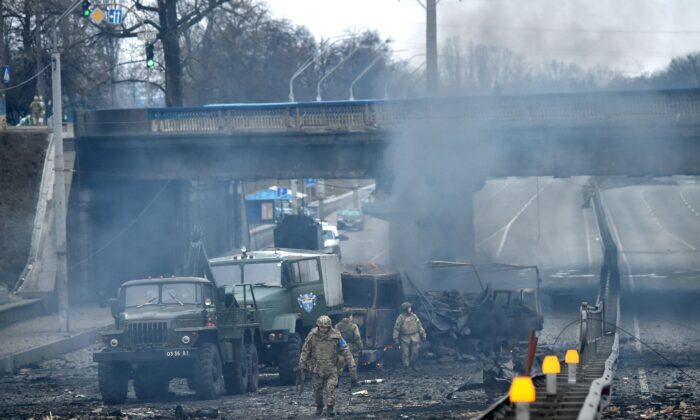 Russia-Ukraine (Feb. 26): Russia Might Confiscate Assets of US Citizens in Sanctions Escalation Threat

The latest on the Russia-Ukraine crisis, Feb. 26. Click here for updates from Feb. 25.

Former Russian President Dmitry Medvedev struck a sharply hawkish tone on Saturday in response to Western sanctions over the invasion of Ukraine, suggesting Moscow might not just freeze, but possibly even confiscate, the assets of Americans, Europeans, and people from other “unfriendly jurisdictions.”

Medvedev, who served a term as Russia’s president and is now deputy chairman of its Security Council, said in a social media post that Western sanctions and asset freezes targeting Russia and its leaders demand a response.

US and Western Allies to Remove ‘Selected’ Russian Banks From SWIFT

The United States, European Union, and other Western allies announced Saturday they will cut off certain Russian banks from the SWIFT international payments system, and put restrictions on the Russian Central Bank, in retaliation for Russia’s attack on Ukraine.

Thousands of banks as well as financial institutions around the world use the SWIFT system to settle cross-border payments. SWIFT, the “Society for Worldwide Interbank Financial Telecommunication,” is used by more than 11,000 financial institutions in over 200 countries and is regarded as crucial for financing international trade.

A Ukrainian man apparently tried to block a Russian convoy of armored vehicles by stepping in front of the trucks, according to footage of the incident that has since gone viral.

The 28-second video, shared by Ukraine news agency HB, shows an unarmed man running in front of several armed vehicles advancing down a road. The encounter has drawn comparisons to the iconic “tank man” of Tiananmen Square.

“Ukrainian rushes under enemy equipment so that the occupiers do not pass,” the outlet wrote on Twitter along with the video of an unidentified man attempting to obstruct the convoy.

Hungary Offers to Host Negotiations Between Ukraine and Russia

Hungary’s foreign minister has offered Budapest as a possible location for negotiations between the leaders of Russia and Ukraine as Russia’s invasion intensifies.

“Budapest can serve as a safe venue for both the Russian and Ukrainian negotiation delegations,” Peter Szijjarto said in a video on Facebook late Friday, adding that he had made the proposal to both Russia’s and Ukraine’s governments, neither of which dismissed it.

“I sincerely hope that an agreement can be reached within a few hours or days to start discussions; the sooner the talks begin, the sooner there will be peace and the fewer people will have to die in the war,” Szijjarto said.

Russian troops attacked an army base in the Ukrainian capital of Kyiv but the assault was repelled, the Ukrainian military said in a Facebook posting early on Saturday.

Separately, the Interfax Ukraine agency said Russian soldiers were trying to capture one of the city’s electricity generating stations.

Ukrainian President Volodymyr Zelensky said on Friday that he believes Russian forces will attack the country’s capital of Kyiv overnight.

“I have to say frankly that this night will be harder than the day,” he said in a pre-recorded video from an undisclosed location.

“This night, they are going to storm. All of us should understand what is awaiting us this night. We have to hold out. Ukraine’s destiny is being decided right now,” he added.

Earlier, Kyiv residents were told by the defense ministry to make petrol bombs to repel the invaders, and on Friday evening witnesses reported hearing artillery rounds and intense gunfire from the western part of the city.

Zelensky filmed himself with aides on the streets of the capital, vowing to defend Ukraine’s independence.

US Imposes Sanctions on Putin, Other Russian Leaders

“We are united with our international allies and partners to ensure Russia pays a severe economic and diplomatic price for its further invasion of Ukraine,” Treasury Secretary Janet Yellen said in statement.

“If necessary, we are prepared to impose further costs on Russia for its appalling behavior on the world stage,” she said.

The fund is a financial entity functioning as a sovereign wealth fund and designed to attract capital into high-growth sectors.

Tens of thousands of Ukrainians have crossed into neighboring countries to the west in search of safety. Those arriving were mostly women, children, and the elderly.

Germany’s foreign minister said Friday that the European Union will take in all people fleeing Ukraine due to the current conflict.

“We need to do everything to immediately take in the people who are now fleeing bombs, fleeing tanks, that’s also what we’ve been preparing for in recent weeks,” Foreign Minister Annalena Baerbock told reporters in Brussels. “We will bring the people from Ukraine to safety.”

Russia vetoed a draft resolution of the United Nations Security Council to condemn Moscow for its invasion of Ukraine and to oust it from the organization on Feb. 25. Three other nations abstained from voting, while 11 voted in favor.

China, whose ruling communist regime was accused by the United States in recent days of giving tacit support to the invasion, abstained. The regime has likewise refused to characterize the invasion as an “invasion.” The move continues Beijing’s efforts to cultivate a public image that it is walking a middle line between the desires of Washington and Moscow.

India and the United Arab Emirates (UAE) also abstained from the vote.