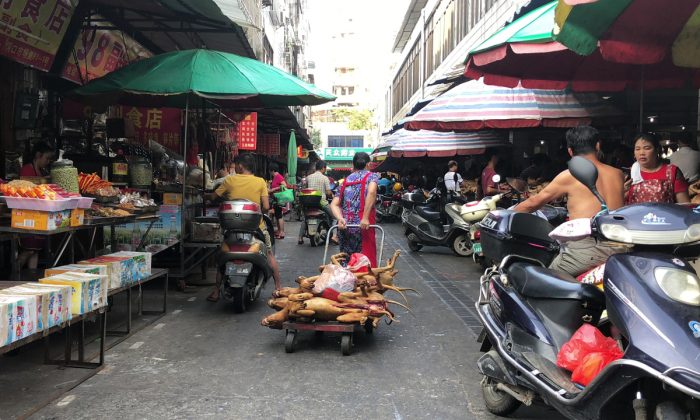 A woman dragging a cart full of cooked dogs through a market in China. (Pak Yiu/AFP/Getty Images)
Social Issues

A restaurant was exposed by concerned social media users for serving dog meat from dogs that were barbecued alive in China’s Shandong Province.

Though original videos were posted by the restaurant’s owner in March, social media users exposed the restaurant’s cooking methods on May 15, according to various Chinese media news outlets. The post said the restaurant described the meat as “Live Barbecued Dog,” and “Live Skinned Dog.”

The shop, named “Ol’ Liu’s Dog Meat Restaurant” first shared videos of the dogs being cooked on March 3. A sign hanging on the right side of the shop reads “Teriyaki Dog Meat.”

The users took footage of a man using a blow torch on a dog’s head, clearly showing it still being alive as it stood up and attempted to escape a few seconds later. The dog’s face is blackened, and blood can be seen on its wet fur. The video of the dog being burned by a blow torch was described by the restaurant as “Southern Crispy-Skin Dog Meat.”

The man who shared the images is the husband of the restaurant owner. He said through text that “it’s the special recipe of other dog meat restaurants for the ‘Southern Crispy-Skin Dog Meat,'” according to WeChat messages with The Beijing Times. The husband did not explicitly confirm or deny if  the dog shown was cooked at his wife’s restaurant.

WeChat is the most popular instant messaging program in China, and has an image and video sharing function similar to Facebook.

Another clip showed a dog laying on its back on a barbecue grill, its jaw still twitching, and weakly whimpering as it lays on a metal grate. The dog laying on the grate was described as “Non-Gutted Live Barbecuing.”

Another image, shared on March 9, showed a dog being skinned alive, with the caption: “[A] child skinning the dog alive.”

In a phone interview with the unnamed restaurant owner, she responded to the allegations of a young child killing a dog. “How could a child kill a dog?” the woman told The Beijing News.

“My child is in first grade, could he help to kill a dog?,” the woman said to The Beijing Times. “Haven’t you thought about it?”

When asked about barbecuing a dog alive, the restaurant owner said that killing dogs is the same as killing sheep, pigs, and chickens. She also asked the reporter if killing those animals is cruel.

“Why do you even raise them? Don’t you raise all of them to be eaten?” the woman said. “We don’t steal dogs, all the dogs we take are the ones people don’t want.”