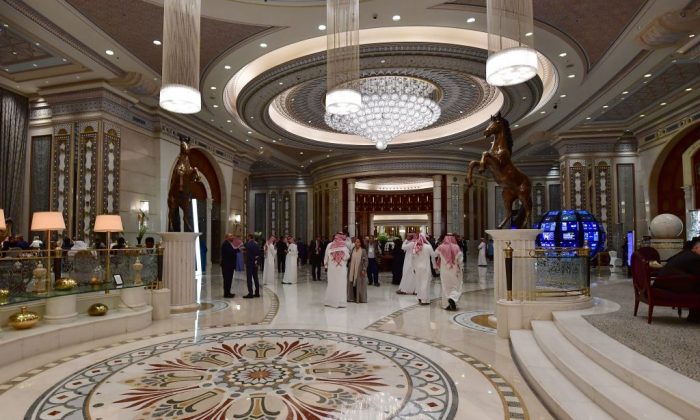 The lobby of the Ritz Carlton hotel in the Saudi capital Riyadh is seen on Oct. 24, 2018, where the Investment Initiative FII summit is taking place. (Giuseppe Cacace/AFP/Getty Images)
Middle East

DUBAI, U.A.E.—Saudi Arabia is slowing a drive to cut its huge fiscal deficit in order to revive the economy, but the state budget plan for 2019 suggests it may not have room to boost growth by much.

With unemployment among Saudis at a record 12.9 percent, creating jobs is becoming increasingly important to justify reforms launched over two years ago by Crown Prince Mohammed bin Salman, who aims to diversify the economy beyond oil exports.

The 2019 budget, released on Dec. 18, reflected that. It promised a 7 percent increase in spending, which officials said would lift growth in the non-oil part of the economy and start bringing down unemployment from next year.

But even that moderate rise in spending will come at a major cost, the budget plan showed: a dramatic reduction in the pace at which Riyadh shrinks the deficit, which it has pledged to eliminate entirely by 2023.

For three years—ever since Riyadh ran an eye-popping deficit of 367 billion riyals ($98 billion) in 2015, or about 15 percent of gross domestic product, threatening its financial stability—fiscal policy focused to a large extent on reassuring markets by cutting the deficit.

The finance ministry said on Dec. 18 that the deficit shrank to 136 billion riyals or an estimated 4.6 percent of GDP this year, from 230 billion riyals in 2017.

Jason Tuvey, senior emerging markets economist at Capital Economics, estimated that if oil prices did not rebound from current levels, the deficit would near 10 percent in 2019—a figure that Saudi Arabia could not sustain in the long run.

That would leave Riyadh in danger of missing the 2023 target for eliminating the deficit by a wide margin, which could revive markets’ concern about the health of Saudi finances, or of being pressured into drastic austerity steps between 2020 and 2023 in order to hit the target.

For these reasons, Saudi Arabia’s room to pursue a go-for-growth fiscal policy is limited, and it will not be able to abandon austerity steps entirely next year, economists said. This could keep expansion of the non-oil sector sluggish.

“While there may be some fiscal loosening in the first half of next year, we think that austerity will probably resume in the second half of 2019,” Tuvey said.

The non-oil part of the economy grew just 2.3 percent in 2018, far too slowly to have much of an impact in cutting unemployment in a country where the population of Saudi citizens is expanding at an annual rate of close to 2 percent.

Riyadh originally set a 2020 date for balancing its budget, pushing that back to 2023 a year ago as the economy struggled. In recent months, officials have not abandoned the 2023 deadline but they have sought to soften its significance.

In late October, after much planning for the 2019 budget was completed, Finance Minister Mohammed al-Jadaan told Reuters that while Riyadh would balance its budgets over the medium term, it would accept some deficits after 2023 if they were needed to spur the economy.

In post-budget news conferences on Dec. 18, senior officials said they remained committed to fiscal balance but did not specifically mention 2023.

Some aspects of the budget indicated key austerity policies would go ahead, however. Jadaan said Riyadh had no intention of changing policy towards fees that it charges for hiring expatriates and issuing residence permits to their dependents.

The fees are due to rise next year, increasing financial pressure on the private sector, which had lobbied for the rises to be delayed.

Also, officials declined to rule out on Dec. 18 the possibility of further hikes in domestic fuel prices. Under previously announced policy, domestic prices of fuels including gasoline, diesel, and kerosene may be raised in 2019.

Domestic fuel price rises may be the only way that Riyadh can achieve a projection in its 2019 budget for oil revenues to rise 9 percent to 662 billion riyals, as many economists think international oil prices are unlikely to rise much if at all.