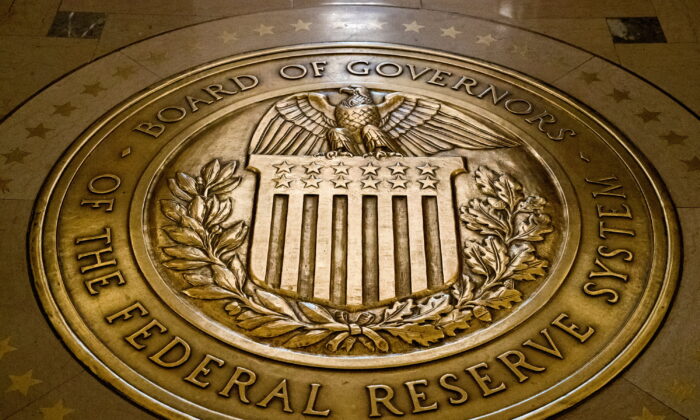 The seal of the Board of Governors of the United States Federal Reserve System is displayed on the ground at the Marriner S. Eccles Federal Reserve Board Building in Washington on Feb. 5, 2018. (Andrew Harnik/AP Photo)
Viewpoints

The Biden–Harris plan is more rhetoric than real

Recently, the White House released its plan to deal with inflation. Except for its commitment to offload most of the effort onto the Federal Reserve, it offers little that can help except over the very long run, which means little for people paying to cool their homes this summer, bring home groceries, or fill their car’s gas tank for their daily commute.

The plan’s best feature is its acknowledgment of the Fed’s primacy in this matter. Inflation is always and ever a monetary problem. The Fed has begun an anti-inflation effort, but because it must now reverse the effects of years during which easy monetary policies effectively financed huge budget deficits—a classic prescription for inflation—it has a long way to go. The best the White House can do is encourage Fed policymakers in that effort, which the Biden–Harris plan seems to do.

President Joe Biden might help by taking steps to narrow budget deficits, and he claims to do that through tax increases on corporations and wealthy Americans. Some economists might dispute whether higher taxes are the best way to narrow deficits.

But that debate aside, the rest of the plan would neuter any budgetary relief by offering a phalanx of subsidies, tax credits, and spending initiatives for infrastructure, wind and solar, electric cars and charging stations, and affordable housing, and to encourage people to become truck drivers, presumably to relieve supply chain issues.

On balance, the plan offers more immediate inflationary pressure on the budgetary front.

But even the most optimistic estimates indicate that the substitution proposed by the White House would take years, possibly decades, to have an effect. The same is true of the plan’s proposal to relieve oil dependence by imposing new, stricter mileage requirements on new cars and trucks.

While the past has shown that such measures can reduce oil use and presumably relieve price pressures, that history also shows that the effects only unfold over the years. The only immediate help comes from releasing oil from the Strategic Petroleum Reserve, which involves amounts that are too small to have any substantive effect.

Biden–Harris would also penalize companies that refuse to develop what drilling leases they have, even when that lack of development is because Washington has refused permits.

Proposals to ease housing prices with tax subsidies that encourage the construction of low-cost housing might help, but only at the margin. The only other real estate proposal would encourage local governments to change zoning rules and other regulations that present barriers to homebuilding.

This has theoretical merit but is politically impractical. Such barriers almost always have the support of powerful local interests that mayors and city councilors will not cross simply because the White House thinks it’s a good idea.

Only two other areas have a place in the White House plan—food and pharmaceuticals. On food, it looks to break the power of large wholesalers. There may be antitrust reasons to attack these firms, but there is little evidence that they have caused the recent rise in food prices. After all, they had market power during periods when food prices were much lower.

As for proposals to help U.S. farmers, it’s hard to imagine a world in which Washington could give more support to farmers than it already does.

The plan would give Medicare the power to negotiate for lower drug prices. This idea, floated many times in the past, is hotly debated in economics and policy circles. Whatever its potential merits, it offers little in the fight against today’s inflation.

Drug prices in the past year and a half have actually had a moderating influence on inflation. According to the Labor Department’s consumer price index, drug prices have risen 2.5 percent over the past year, compared to 8.3 percent for prices generally.

Except for the welcome commitment to the Fed, this plan offers more rhetoric than practical ways to alleviate immediate inflationary pressures on Americans. Those parts that offer practical help would do so only over the longest of time horizons, too long to do much for those suffering today.