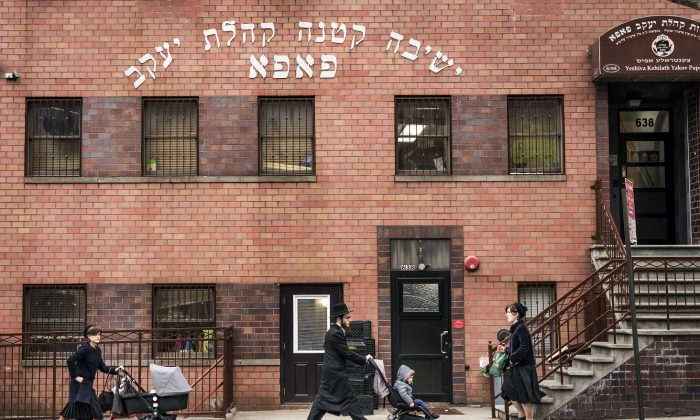 Pedestrians walk past the Yeshiva Kehilath Yakov School in the Williamsburg neighborhood of Brooklyn, N.Y., on April 9, 2019. (Drew Angerer/Getty Image)
US News

Orthodox Jews have customs and beliefs very different from those of the mainstream, so when measles started to spread among them, the rest of the world jumped to the conclusion that this was because many of them eschew vaccination.

Stoked by fear of a disease that health officials could not stop, many media reports and even the New York mayor’s office have reinforced this narrative.

To date, city officials have reported 390 cases of measles in Brooklyn and Queens since the outbreak started in October, and media and government officials have implied that low vaccination rates are responsible.

To fix this apparent failure to vaccinate, Mayor Bill de Blasio mandated MMR vaccination in neighborhoods affected by the outbreak as well as in surrounding neighborhoods encompassed by four zip codes. This mandate overruled established New York law that gives parents the right to opt not to vaccinate their children based on religious reasons.

Furthermore, because of the belief that there is widespread abuse of the religious exemption among Jews, some New York state senators now are calling for an end to the exemption.

However, a careful look at the data available on vaccination rates in Orthodox Jewish communities, and reports by members of the community and their doctors, indicate that the Hasidic community is vaccinated on par with the rest of the city.

What the Data Shows

City officials say that 1,800 school-age children in yeshivas (Jewish educational institutions) in Williamsburg and Borough Park, where the vast majority of the outbreaks in the city are located, have vaccination exemptions on file.

The health department told The Epoch Times that it doesn’t know how many students attend these schools in total.

The Orthodox Jewish Public Affairs Council (OJPAC) estimates that there are more than 50,000 K-12 school children in these two communities. This number puts the vaccination rate at around 96 percent. The threshold for herd immunity for measles is presumed to be 93 to 95 percent.

That information also is supported by Jane Zucker, New York City’s assistant commissioner of the Bureau of Immunization. Zucker told Vox that most school-age children in the community are vaccinated at levels on par with other schools.

The health department told The Epoch Times that city schools have a 98.6 percent vaccine compliance rate and that some yeshivas are indeed at this rate. It also said some yeshivas are at 80 percent but didn’t specify how many schools fall into each category. A request for clarification was not returned by press time.

Also important to note is that some of these 1,800 exemptions are for medical reasons.

OJPAC also noted in a statement that in upstate Rockland County, where the Orthodox community is also in the midst of a measles outbreak, most schools now have a 95 percent vaccination rate for measles. One yeshiva had 100 percent compliance, as reported by health officials early in the outbreak.

Regarding the vaccination rates in other members of the Orthodox community, the NYC health department doesn’t have any data.

However, members of the community say they are well vaccinated.

“Most in the ultra-Orthodox community are vaccinated, and a vast majority of prominent rabbis support the vaccination requirements,” wrote Moshe Friedman, a Hasidic yeshiva graduate and a father of three, in an opinion piece in The New York Times.

Property manager Israel Friedman told The Washington Post that in his family, all his many siblings and his children who are of age have been vaccinated, which he believes is representative of the population.

David Oberlander, the principal of a yeshiva where cases of measles were found earlier in the outbreak, said “97 percent of our students and family are vaccinated,” according to The Washington Post.

Reports from doctors who treat the community corroborate this.

“I don’t really at NYU see a lot of [Hasidic] patients that are adamant about not getting vaccines, I mostly see the ones that are delayed,” Dr. Jennifer Lighter, a pediatric epidemiologist with the New York University Langone hospital system, told the Jewish publication Forward.

Dr. Jay Begun, a pediatrician in Williamsburg, told The Associated Press that only “a very small minority,” of his patients don’t vaccinate at all.

So What Is Causing the Outbreak?

If it’s not a ubiquitous lack of vaccination, then why are we seeing so many cases of measles?

The answer may lie in a combination of factors, including the large numbers of young children, delays in receiving the MMR, and vaccine failure.

OJPAC notes that large family size and frequent mingling during holiday and other events create an environment conducive to spreading an infection that is not present in other segments of society.

It’s worth noting here that the CDC has reported more than 400 cases of mumps in 34 states this year and that these outbreaks can occur in highly vaccinated populations, especially where people are in close contact with one another.

“Mumps outbreaks can still occur in U.S. communities of people who previously had one or two doses of MMR vaccine. This is particularly common in close-contact settings. High vaccination coverage helps limit the size, duration, and spread of mumps outbreaks,” the CDC says.

A number of Orthodox parents appear to be choosing to delay the MMR vaccine for their young children.

“Williamsburg … has one of the lowest rates of vaccine coverage among young children, ages 19 to 35 months, in the city,” wrote Belluz.

Zucker told Vox, “We hear they want to wait until the child is older so they know the child doesn’t have autism, then get the child vaccinated.”

However, given the school data, delays in vaccination can’t explain the scope of this outbreak. Another piece of the puzzle is vaccine failure. Recent data from the health department confirms that a known minority of cases are found in vaccinated people.

Failure of the MMR vaccine to prevent measles outbreaks is not a topic media report on, but it is well documented in scientific literature that outbreaks happen in highly vaccinated populations around the world.

In 2017, measles was reported in nine vaccinated Israeli soldiers.

In 2003, an outbreak in a boarding school in Pennsylvania also caused nine cases, with six of the people affected having received two doses of the measles vaccine.

In 2012, an editorial by the editor-in-chief of the journal Vaccine noted some rather spectacular failures: an outbreak in Canada, where over 50 percent of the 98 people infected had received two doses of measles vaccine, and a U.S. outbreak spanning from 1989 to 1991 in which 20 to 40 percent of infections were in people who had received one or two doses.

The editorial also notes that multiple studies show that even two doses of measles vaccine do not appear to confer immunity in 2 to 10 percent of people, a phenomenon called primary failure. Secondary failure refers to the waning of immunity over time.

“Thus, measles outbreaks also occur even among highly vaccinated populations because of primary and secondary vaccine failure, which results in gradually larger pools of susceptible persons and outbreaks once measles is introduced. This leads to a paradoxical situation whereby measles in highly immunized societies occurs primarily among those previously immunized,” Dr. Gregory Poland wrote.

Poland further says that the current vaccine may not be good enough to prevent outbreaks due to the combination of vaccine failure and hesitancy based on fears that the MMR vaccine can cause autism. These two factors may very well be what’s causing the New York outbreaks.

Corroborating this, an April 27 report in Outbreak News Today (ONT) said that of 60 measles cases reported in adults in NYC, 17 cases were in vaccinated individuals. In other individuals, vaccination status was unknown.

Consistent with reports of parents choosing to delay the MMR, ONT said that a majority of measles cases in children have occurred in those who are unvaccinated. Citing NYC health officials, it also reported that 26 (out of 330) cases have been in vaccinated children.

For some reason, the ONT report included in this 330 figure the 65 measles cases reported in infants under one year. However, the first dose of MMR is not normally recommended until 12 months, so it would be expected that these infants would not be vaccinated. De Blasio’s vaccine order does mandate that babies over six months be vaccinated, but many of these cases predate this order.

Furthermore, measles in breastfeeding infants of vaccinated mothers could be the result of secondary vaccine failure because the mother has not retained enough vaccine-induced immunity to pass on protective antibodies to her baby.

Of the Jewish parents who choose not to vaccinate, many cite secular reasons, the same reasons cited by parents around the country.

Just as society rushed to condemn these New York Jewish communities as “anti-vax,” so too have other parents with concerns about vaccines felt the brunt of this label.

With regards to the MMR, parents who delay might rather be seen as concerned and prudent, because we have not yet had a societal reckoning with the story of the CDC whistleblower.

Hanging in the air is 2015 testimony by Congressman Bill Posey (R-Fla.) that he has documents from a CDC researcher showing that the agency covered up findings that link early MMR vaccination with autism.

In any case, the data show some apologies to the Jewish community may be in order.