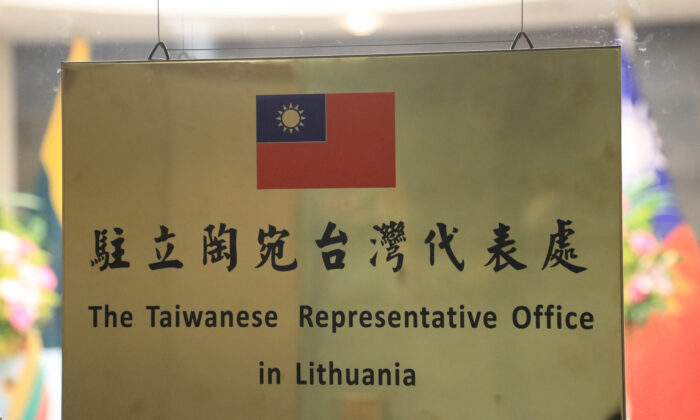 The name plaque at the Taiwanese Representative Office in Vilnius, Lithuania, on Nov. 18, 2021. (Petras Malukas/AFP via Getty Images)
Thinking About China

Lithuania, a small country of nearly 3 million people, has not caved in to Chinese pressure amid a diplomatic row over the Baltic nation’s decision to develop ties with Taiwan.

“We will not bend to this pressure,” Mantas Adomenas, Lithuania’s vice-minister for foreign affairs, told Reuters, referring to Beijing’s coercion. “What we decide to do, by calling Taiwan Taiwan, is up to Lithuania, not Beijing,” he added.

After the Lithuanian government allowed Taiwan to open a representative office, using the name “Taiwan,” in the capital of Vilnius, the Chinese Communist Party (CCP) called the move a “bad precedent.” Beijing then downgraded its diplomatic ties with Lithuania.

The CCP claims that Taiwan is part of mainland China, although many democratic nations feel Taiwan deserves more recognition in the world community. Beijing prevents other countries from forming closer ties with Taiwan and pressures them to uphold the “one-China” policy. The CCP even threatens countries with economic sanctions just for engaging with the island nation. It is a tragic story, dating back to the Chinese civil war.

When the CCP took over mainland China and established the People’s Republic of China (PRC) in 1949, the Nationalist leader Chiang Kai-shek and about 2 million of his Kuomintang followers retreated to the island of Formosa (Taiwan) and established a temporary capital in Taipei. In 1971, the PRC was recognized by the United Nations. Eight years later, the United States switched recognition from Taiwan to the PRC. Since then, other countries have followed suit, leaving Taiwan with only 14 allies today.

Taiwan is a multi-party democracy with its own army, currency, and government. The average Taiwanese does not want to be ruled by communist China. The current, democratically-elected president, Tsai Ing-wen, is part of the Democratic Progressive Party (DPP), which is a pro-independence party. Beijing has been clear that it would never agree to Taiwan being independent, and has repeatedly threatened to retake Taiwan by force, if necessary.

Under the Taiwan Relations Act (TRA), the United States is committed to selling defensive weapons to Taiwan and could possibly intervene if China invades the island. The Trump administration increased arms sales to Taiwan and stationed U.S. troops there, for the first time in over 40 years. The Biden administration has doubled the number of troops, continuing the Trump-era policies of forging closer relations with Taiwan while taking a tough stance against China.

In response to the opening of the Taiwan representative office in Lithuania’s capital city of Vilnius, China recalled its ambassador—the first time it had done so since the European Union was formed in 1993. Before the formation of the EU, in 1981, Beijing recalled its ambassador to the Netherlands after a Dutch company sold submarines to Taiwan. The CCP then asked the Netherlands to withdraw its ambassador from Beijing, downgrading the embassy to a charge d’affaires. Relations between the two countries were not normalized again until 1984.

The CCP also bullies international organizations, threatening to withhold funding, if they allow the use of the name “Taiwan.” Taiwan competes as “Chinese Taipei” in the Olympic Games, and the same name is used in the World Trade Organization (WTO).

Lithuania has had a number of grievances with China over the years. In 2012, China formed a trade pact that would eventually be known as the “17+1.” Twelve EU states and five Balkan states are members of the bloc.

When Lithuania joined the trade pact, it expected an increases in trade and investment from China. Instead, nearly ten years later, Lithuania’s trade deficit with China has increased by nearly 33 percent. And exports to China have actually decreased by 4 percent compared to a year earlier. As a result, Lithuania quit the 17+1. Lithuanian Foreign Minister Gabrielius Landsbergis urged other EU countries to do the same, saying that the trade pact is “divisive” for Europe.

Lithuania’s parliament condemned the CCP’s repression of Uyghur Muslims in China’s Xinjiang region, which they identified as “crimes against humanity.” At the same time, the EU parliament demanded that Beijing lift sanctions against EU members. Until the sanctions are lifted, the EU refuses to ratify an EU-China trade deal. Lithuania, meanwhile, chose Sweden’s Telia Company for the nation’s 5G network, replacing Chinese tech firm Huawei.

One year ago, Lithuania’s ruling coalition issued a statement of support for “those fighting for freedom” in Taiwan. More recently, Parliamentarian Matas Maldeikis, the head of the Taiwan friendship group in the Lithuanian Parliament, along with lawmakers from Estonia and Latvia, visited Taipei. Maldeikis told President Tsai Ing-wen, “We are here to express solidarity with you.” He went on to say that “Taiwan and the Baltic nations share similar experiences of breaking free of authoritarian rule and fighting for freedom.”

The Chinese ambassador to Estonia said that he was disturbed that Estonian parliamentarians had participated in the Taiwan conference. Member of Parliament Madis Milling, who was part of the delegation, told Estonian media that the country’s goal should be to open a Taiwan representative office in the capital of Tallinn, and eventually to grant diplomatic recognition to the Republic of China (ROC, Taiwan’s official name). The Chinese Embassy said that Milling’s comment interfered with China’s internal affairs and that Taiwan’s only future is reunification with China.

In mid-December, Lithuania recalled its diplomats from China. Diplomatic sources told Reuters this was the result of intimidation. The Lithuanian foreign minister said that Beijing had demanded to downgrade the Lithuanian Embassy to a charge d’affaires office. Consequently, the diplomats were recalled because their status in China had become uncertain.

The Taiwan foreign minister supported the courageous stance that Lithuania was taking against China, and called on Taiwanese companies to increase their engagement with the Baltic nation.