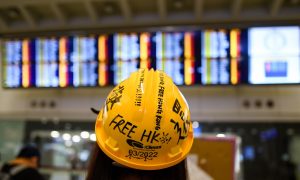 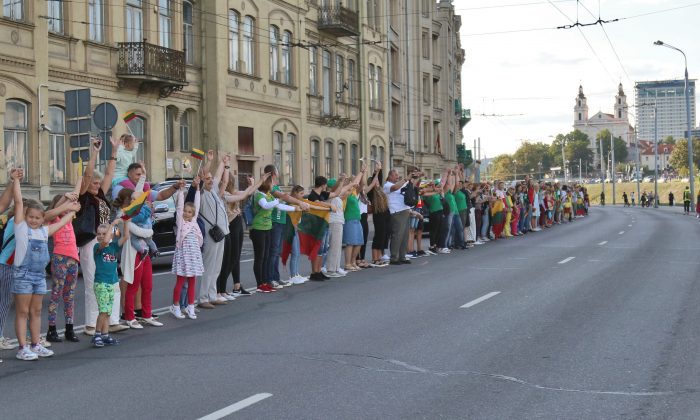 People form a human chain under the motto "The Baltic Way - It's Us" from Gediminas Tower to the City Limits in Vilnius, Lithuania on Aug. 23, 2019. From Catalan separatists to Hong Kong pro-democracy activists, the human chain that helped the Baltic states win independence from the Soviet Union three decades ago still inspires freedom-seekers the world over. (Petras Malukas /AFP/Getty Images)
Europe

VILNIUS, Lithuania—Lithuania said it’s lodged a protest with the Chinese embassy after some of its diplomats were involved in disruptions at a pro-Hong Kong protest in the capital Vilnius last month.

Lithuania’s Foreign Ministry said Sept. 2 in a statement that Chinese diplomats acted “in violation of public order” at the Aug. 23 event, which was organized to show solidarity with anti-Beijing protesters in Hong Kong.

A police spokesman told Reuters that two Chinese citizens were detained and fined 15 euros ($17) each, after people agitated protesters by waving Chinese flags.

“We have information that some [Chinese] diplomats were more active than they should be, and that is not acceptable,” Lithuania’s Foreign Minister Linas Linkevicius told reporters, without giving further details or naming them.

The embassy didn’t respond to Reuters requests for comments, but in a statement to the BNS news wire, it denied doing anything to upset public order.

“It (was) a spontaneous action of the Chinese citizens expressing their dissatisfaction with a handful of anti-China activists’ support to the rioters in Hong Kong,” it said.

The event in Vilnius occurred as activists formed human chains across Hong Kong, inspired by a similar protest against Soviet rule in Lithuania, Latvia, and Estonia in 1989.

Mantas Adomenas, a member of parliament who organized the Vilnius protest, told Reuters that before police intervened, several Mandarin speakers with Chinese flags jostled activists and attempted to take their megaphone.

After the arrest of the two Chinese citizens, police were approached by people who showed embassy identification and asked for the detainees’ release, Adomenas said, citing witnesses in a version partly corroborated by the police spokesman.

“I reviewed filmed footage of the protest, and I saw that the Chinese ambassador was present at the sidelines, and was several times approached by people from the protest,” Adomenas added.

The unrest in Hong Kong began over a now-suspended extradition bill, but has quickly morphed into a wider pro-democracy movement resisting Chinese control of the former UK-ruled territory.