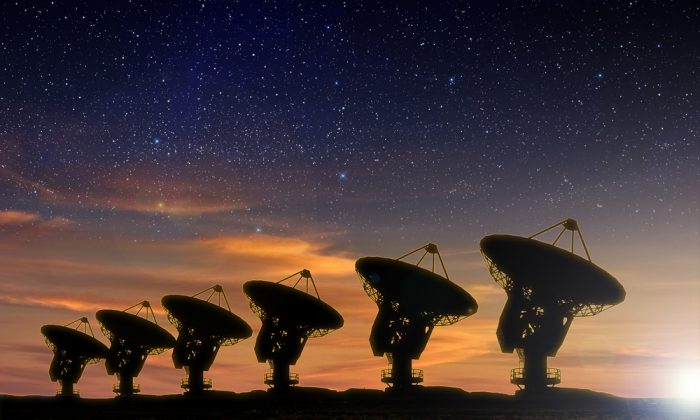 Listening to the Skies

WASHINGTON—As many amateur astronomers keep their eyes on space, looking through telescopes for unusual phenomena, others get excited by a less visual survey of the great unknown.

Amateur radio astronomers at the USA Science & Engineering Festival in Washington D.C. this weekend spoke with great animation of the solar flares and other, more distant and mysterious, phenomena we can “see” by tuning into the radio waves from space.

In 2007, the first fast radio burst was detected. It was so mysterious many astronomers wrote it off as a freak occurrence. In 2013, four more were observed. These puzzling bursts differ from standard radio emissions in their intensity and brevity, and the fact that they reach us from unknown sources estimated to be several billion light years away.

It is now thought that these bursts could be happening thousands of times a day, though we have detect very few of them because observation capabilities are limited. So what is causing these dramatic flares out there?

Some say the bursts may be emitted by supramassive rotating neutron stars as they die. Heino Falcke of Radboud University Nijmegen in the Netherlands and Luciano Rezzolla of the Max Planck Institute for Gravitational Physics say these stars would shed their magnetic fields as they collapse into black holes.  Others say this is unlikely, given the high frequency with which these bursts are estimated to occur.

Finding their sources could help us understand big changes in the intergalactic medium.

West Virginia University astrophysicist Duncan Lorimer, who observed the first burst in 2007, is just happy the bursts will now be studied. He felt vindicated after years of questioning his seemingly anomalous finding.

“[Fast radio bursts] are really going to drive demand for the next generation of radio telescopes as we try to figure out what’s making things go off all across the universe like this every 10 seconds,” he told Scientific American last year. “For a while there will be more theories than individual detected bursts, but soon we’ll have hundreds of these things from across the entire sky. It’s not very often in astronomy that you get completely new classes of objects coming along, especially ones as strange as these. We are witnessing the birth of an entirely new area of research.”

Down to Earth, and Citizen Astronomers

A more earthy use of radio astronomy, said one of the Society of Amateur Radio Astronomers (SARA) volunteers at the festival who preferred not to be named, is to predict when radio storms will occur. These storms can emanate from large solar flares or the natural radio lasers near Jupiter’s magnetic poles, for example, and they can affect communication equipment on Earth.

“We’re talking about energy,” said the SARA volunteer. “If we can understand energy better, perhaps one day we could develop more efficient energy sources, [or] faster-than-light travel.” It may not happen right away, he said, and radio astronomy may not seem to have a direct impact on energy technology, but the knowledge gained could greatly contribute to the development of these technologies.

The 2014 USA Science & Engineering Festival in Washington, D.C., is taking place April 26–27. Epoch Times is a media sponsor of the festival, so expect more great coverage to come!

*Image of radio telescopes via Shutterstock