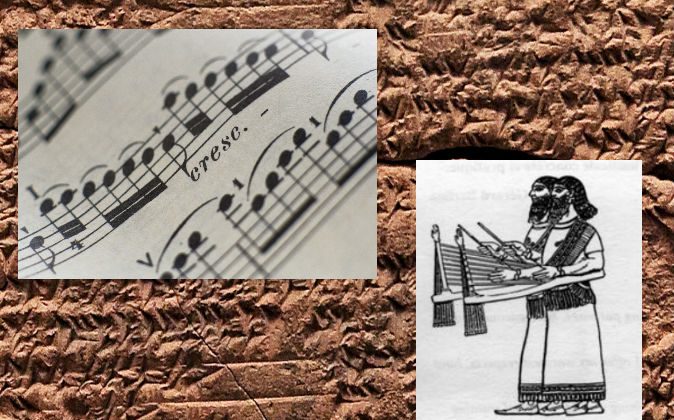 Right: Right: An example of the type of instrument that would have been used to play the Hurrian hymn, a rendering of an ancient Babylonian santur. (Wikimedia Commons) Left: Sheet music (Thinkstock) Background: Cuneiform tablet (Shutterstock*)
archaeology

Scholars from the University of California at Berkeley have brought to life the ancient sounds of Mesopotamia following the decryption and study of a set of ancient cuneiform texts that date back 3,400 years, according to a report on WFMU. The result is the recreation of a piece of music unheard for thousands of years, and the CD titled ‘Sounds from Silence’ is now available to the public, and an alternative interpretation can be listened to here:

Known as the lexical texts, the corpus of ancient cuneiform tablets, which range in time from the third millennium to the first century BC, were first discovered in the early 1950s in the ancient Syrian city of Ugarit. Before this time, virtually nothing was known about Sumero-Babylonian music, aside from the type of musical instruments they used, as deducted from carved pictures and archaeological finds. Scholars were completely in the dark about the theory and practice of what was considered a divine art, whose patron was the god Enki/Ea, who oversaw the realms of magic, arts, and crafts.

However, the spectacular discovery shed light on the wide range of scholarly pursuits of the ancient Sumerians and Hurrians. Within the collection, four single cuneiform texts and a fifth text group was found to contain complex musical theory and notation, as well as a 3,400-year-old cult hymn, the oldest complete piece of notated music ever discovered.

The entrance to the royal palace at Ugarit, where the Hurrian songs were found.(Disdero via Wikimedia Commons)

Although nearly 40 hymns in cuneiform writing were found on fragments of clay tablets, only one of these tablets, the Hurrian hymn to Nikkal, was found to be nearly complete. The tablet contains the lyrics for a hymn to a goddess of orchards, Nikkal, and instructions for a singer accompanied by a nine-stringed sammûm, a type of harp or, much more likely, a lyre. One or more of the tablets also contains instructions for tuning the harp.

Due to the difficulty in interpreting the Hurrian language, the meaning of the text is very unclear, and only one interpretation has been proposed so far. Here is a simplified English version:

I will (bring x?) in the form of lead at the right foot (of the divine throne)
I will (purify?) and change (the sinfulness).
(Once sins are) no longer covered and need no longer be changed,
I feel well having accomplished the sacrifice.

(Once I have) endeared (the deity), she will love me in her heart,
the offer I bring may wholly cover my sin
bringing sesame oil may work on my behalf
in awe may I …

The sterile may they make fertile,
Grain may they bring forth.
She, the wife, will bear (children) to the father.
May she who has not yet borne children bear them.

Anne Draffkorn Kilmer, professor of Assyriology at the University of California, produced an interpretation of the musical piece in the 1960s, and since then, other scholars of the ancient world have published their own versions.  Professor Kilmer and Richard Crocker of the University of California at Berkeley have now published an audio book called Sounds From Silence, in which they narrate information about ancient Near Eastern music, and, in an accompanying booklet, present photographs and translations of the tablets from which the song above comes. They also give listeners an interpretation the song, titled “A Hurrian Cult Song from Ancient Ugarit,” performed on a lyre, an instrument likely much closer to what the song’s first audiences heard.

Although this version is only available for purchase, you can listen to interpretations of the song by other scholars at Urkesh Public in the video clip above.

*Image of a cuneiform tablet via Shutterstock