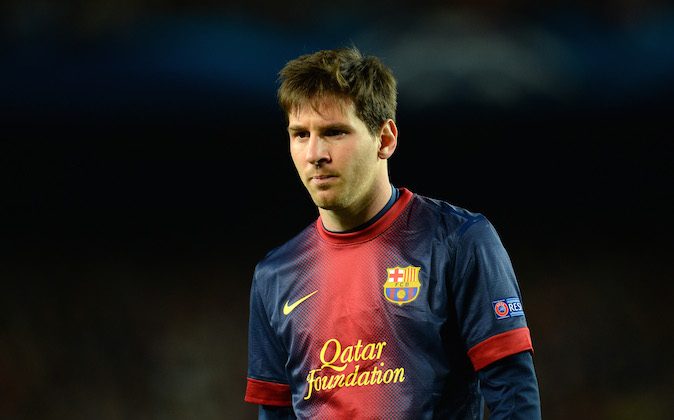 Lionel Messi Net Worth, Salary, Earnings: How Much Does Argentina, Barcelona Make?

How much does Argentina and Barcelona star Lionel Messi make?

Probably the most famous, and arguably the best, football player in the world today, Messi started his career at FC Barcelona at age 16 against Porto, and made his league debut against RCD Espanyol.

Messi would go on to win the La Liga title with Barcelona 6 times, the Copa del Rey 4 times, and the Champions League 3 times, among other honors.

Personal honors wise, “The Flea” would win the FIFA Ballon d’Or — an award given to the best male player of the year — three times.

According to CelebrityNetworth, Messi has a net worth of $180 million.

Forbes puts his annual earnings at $64.7 million as of June 2014. $41.7 million of his earnings come from his salary and winnings, and $23 million comes from endorsement.

Messi: Argentines Made Too Many Mistakes vs Bosnia

The Argentina captain said his team committed too many mistakes in its 2-1 win over Bosnia-Herzegovina, including starting the game with two attackers instead of three.

“I think the best teams in the in first games were the Netherlands and Germany,” Messi said Monday. “But I think there are still teams that haven’t shown what they can do and it’s difficult to draw conclusions from a single match. I think as the tournament goes on they will improve.”

The Netherlands stunned defending champion Spain 5-1 — a result Messi said no one expected — while Germany thrashed Cristiano Ronaldo’s Portugal 4-0 in their opening games.

Messi stopped short of criticizing coach Alejandro Sabella but said he hopes Argentina will stick with the three-man attack it used in the second half against Bosnia — even against stronger opponents.

“We are Argentina and I think we have to focus on ourselves and not on who we’re facing,” Messi said. “Of course depending on the result of a game we can change to another system. But personally I think we need to look at ourselves first and not focus on the rival.”

Sabella started the match with Messi as a one of two attackers in a 5-3-2 formation that the Barcelona star said left him and Sergio Aguero cut off from the game. Argentina played poorly and was lucky to be ahead 1-0 at half-time after an own-goal.

In the second half Sabella let Messi drop behind Aguero and Gonzalo Higuain in 4-3-3 formation, a switch that paid dividends as Messi scored a brilliant goal following a 1-2 with Higuain.

“That’s how we’re used to playing. That’s how we played in most of the friendlies and qualifiers,” Messi said.

Asked why he thought Sabella chose to start the game with a more cautious lineup, he said: “You have to ask Alejandro. He makes the decisions and decided that we should go out to play that way … Maybe he was thinking he didn’t want to let the three points slip away.”

“Playing with three up front is much easier. For Leo too, because he always has two players to pass to. And when I join up he has a third,” Di Maria said after the match Sunday.

Sabella admitted his initial game plan didn’t work and that the half-time change allowed Messi to get more involved in the game.

Argentina plays Iran in its second match on Saturday.