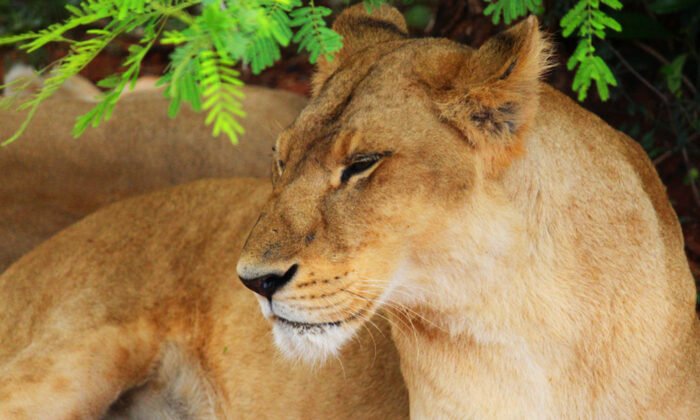 The sabre-tooth tiger once roamed the earth in the Pleistocene period, spreading terror in the hearts of prehistoric humans, but the giant cats have been extinct for at least 12,000 years. However, modern cross-breeding between lions and tigers created hybrid “ligers” that have reached sizes comparable to those terrifying feline ancestors.

At the Myrtle Beach Safari in South Carolina, park owners Bhagavan Antle and his son Cody Antle have introduced the world to its largest cats in the world: the white liger Apollo, weighing 705 pounds (approx. 320 kg), and his uncle Hercules, an adult male liger that weighs a whopping 922 pounds (approx. 418 kg).

Hercules holds the title of “Largest Living Cat” in the Guiness Book of World Records, but Apollo is even more unusual in that he comes from the breeding of a white male lion and white female tiger.

The Myrtle Beach Safari Park has been open since 1983 and promises visitors the opportunity to “Feed an elephant, interact with tiger cubs, watch an eagle soar, monkey around with great apes, and meet the Liger, the world’s biggest cat!” The park has selectively bred its tigers to achieve the distinctive white color, which hasn’t been found in the wild since the 1950s.

In the video introducing Apollo, Kody Antle was joined by the “Real Tarzann,” Mike Holston, who marvels at the size and strength of Apollo the liger. “The question is, what would this thing eat? I believe it would eat everything in sight, anything in sight,” Holston says. “I think a pack of these things would take down a herd of elephants on the regular for a snack.”

Jungle boys living in a dream world @kodyantle 🔥 check out all the conservation and education work at @rarespeciesfund !

According to Myrtle Beach Safari’s website, “[Hercules’] hearty diet consists of 20 pounds of beef or chicken each day, which he burns off in no time with his 50 mph runs and swims (unusual for water-fearing lions).”

The breeding of ligers, however spectacular, remains a controversial practice. The most important reason that many conservationists oppose it is because lions and tigers share almost no habitat in the wild and have never mated of their volition in the wild.

The bigger problem is that while lions and tigers can have viable offspring, male ligers are often sterile, and birth defects that severely impact lifespan can arise. “With hybrids there’s a much greater chance of the genetics being messed up,” Luke Hunter, who runs the wildcat conservation group Pantera, told National Geographic.

Liger 🦁➕🐯 Many people do not know but ligers once roamed the wild. Modern genetic research shows us that all tigers have lion DNA and all lions have tiger DNA. Hybridization is a part of the evolutionary process ♾

The Association of Zoos and Aquariums (AZA) also has a policy against inter-breeding. “Propagating animals that specifically do not represent the normal characteristics and variation of the species creates a confused educational message,” the organization explained in a white paper. The AZA also stands against breeding animals to arrive at specific color morphs, such as white tigers, because of the inbreeding that is often necessary to make such recessive traits stand out.

Luke Dollar, director of National Geographic Society’s Big Cats initiative, posed a question: “If we want to recognize and honor big cats as they naturally occur in the wild, why would we possibly experiment in these completely unnatural and not biologically founded practices?”

As for the Myrtle Beach Safari, they claim that their efforts to breed lions and tigers in captivity aren’t about making spectacular crosses that bring in curious visitors but rather to help in the survival of the world tiger population.

On its website, the organization explains that it hopes to save exotic animals such as tigers “by breeding animals that are failing in the wild. The main reason for this failure is that humans have destroyed 99 percent of all natural wildlife habitats.”

The site notes that the areas where tigers and lions live are increasingly vanishing in the face of human activity: “The MBS invests heavily in tiger conservation efforts, but with only 3,000 tigers left in the wild the only way to avoid total extinction is through captive breeding and management of bloodlines.”