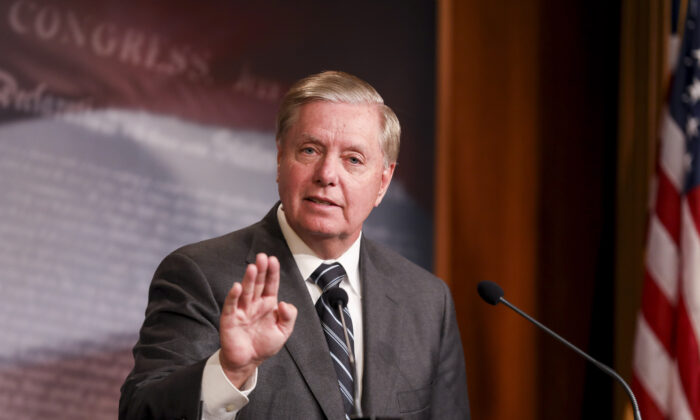 Sen. Lindsey Graham (R-S.C.) said Thursday that China’s communist regime, which he called “the largest state sponsor of pandemics,” should face punishment for its role in the global unleashing of COVID-19.

Speaking to host Sean Hannity on Thursday, Graham said data suggests the regime failed to disclose information about the severity of the outbreak of the Chinese Communist Party (CCP) virus, commonly known as the novel coronavirus, thereby fanning its global spread.

He said China should face consequences for the virus-related actions of its leadership.

“What did we do to Iran who’s a bad actor? We sanctioned Iran. What should we do to the largest state sponsor of pandemics on the globe? We should sanction China to get them to change their behavior,” Graham said.

The South Carolina senator then attributed the pandemic-driven loss of life in the United States, as well as the economic fallout, to the actions of the Chinese regime.

“If it were not for the irresponsibility of the Chinese Communist Party, there would be no pandemic in the world,” Graham said. “Americans would be alive today and 22 million people would be at work.”

Graham’s remarks refer to the over 20 million Americans who filed for unemployment benefits in the past month, Thursday’s Labor Department figures show.

His comments follow an initiative by Sen. Ted Cruz (R-Texas), who this week introduced legislation “to hold the Chinese officials involved in covering up the coronavirus outbreak accountable.”

“The Chinese Communist Party deliberately silenced those who tried to sound the alarm and provide the world with medical information … Had the Chinese government acted responsibly, the coronavirus outbreak might not have turned into a global pandemic,” Cruz said in an April 14 press release.

Fauci, who heads the National Institute of Allergy and Infectious Diseases, told Fox News that he does not find China’s claim of less than 5,000 COVID-19 deaths credible, nor does he believe the regime has released all the pertinent data.

“That number is really rather a low number. That number surprises me that that number is so low,” Fauci said, referring to the regime’s official claim of the number of people in China who fell victim to the CCP virus.

“I think any of us who have been dealing with this now, for the last few months, don’t feel confident at all that we have all of the data of the originally infected individuals, how long there were people in circulation or even now, how many deaths there really are in China,” Fauci said in the interview.

The CCP virus has caused at least 146,201 deaths globally and infected nearly 2.2 million people as of Friday morning, according to data collected by Johns Hopkins University. The numbers are considered inaccurate by many because of a lag in data collection by governments as well as significant underreporting of known cases and deaths by mainland China.