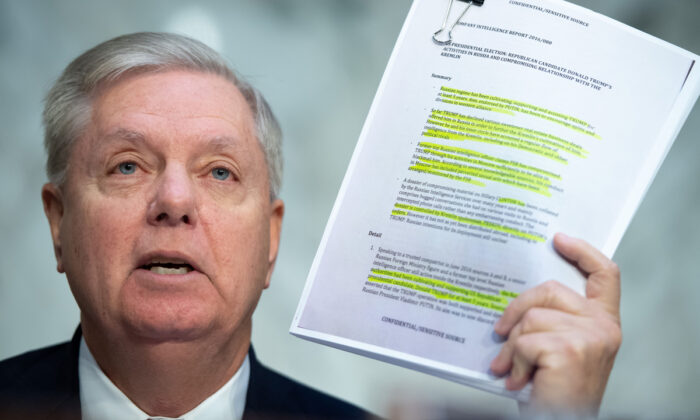 Sen. Lindsey Graham (R-S.C.) has revealed the Senate’s investigation into FBI abuse of the Foreign Intelligence Surveillance Act will focus on a Russian source who disputed much of the information in former British intelligence agent Christopher Steele’s dossier.

Speaking on Fox News’s “Sunday Morning Features,” the chairman of the Senate Judiciary Committee said the investigation will mainly focus on interviews the agency conducted with the Russian source, known in the Justice Department inspector general’s report as “Primary Sub-Source.”

“What I’m going to do is call the people who were involved in investigating the counterintelligence investigation,” Graham told host Maria Bartiromo.

“You have 21 people involved that I’ve named. And I want to find out what did [former FBI deputy Director Andrew] McCabe and [former FBI Director James] Comey know, when did they know that the dossier was unreliable.”

Graham also expressed skepticism that the allegations had failed to reach those higher up in the FBI, adding, “I find it hard to believe that that did not work its way up to Comey and McCabe.”

“I want to find out when did Comey and McCabe understand that it was not reliable and work from there.”

The report states that “Primary Sub-Source,” was Steele’s only direct source for information that was utilized in the dossier, which the FBI cited extensively in its four applications for FISA orders on Carter Page.

However, according to the inspector general’s report, the source disputed much of what was attributed to him in the dossier, compiled by Steele, who had been hired by Fusion GPS, which in turn was hired by the Hillary Clinton campaign and the Democratic National Committee through the Perkins Coie law firm, according to the Washington Examiner.

The source allegedly told the FBI and Justice Department that Steele’s allegations were false or misleading.

“The primary sub-source made statements during his/her January 2017 FBI interview that were inconsistent with multiple sections of the Steele reports, including some that were relied upon in the FISA applications,” the IG report states.

Graham also said he also wants to know who else, if anyone, knew that the dossier was not credible, including former acting Attorney General Rod Rosenstein.

“Did Rosenstein know that the dossier had been debunked by the time he signed the warrant? How could he not know?” Graham asked.

FBI Director Christopher Wray has since apologized to the Foreign Intelligence Surveillance Court (FISC) for the way it conducted surveillance of former Trump campaign adviser Carter Page during the 2016 election.