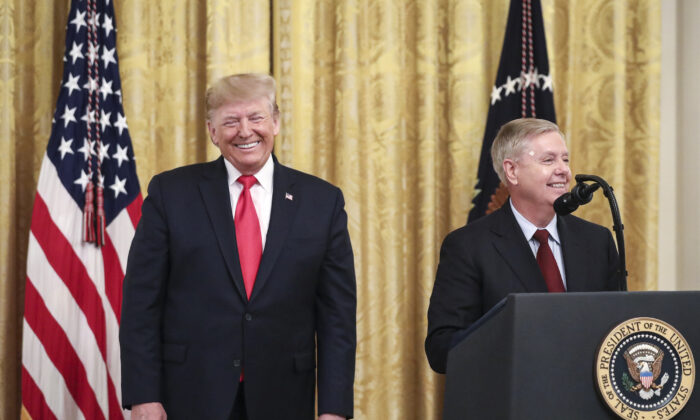 Sen. Lindsey Graham (R-S.C.) on Tuesday called for the release of the FBI affidavit that was used to justify the raid of former President Donald Trump’s Florida home.

“We need the affidavit, show your cards, Merrick Garland can’t have it both ways, he can’t give us the inventory of the warrant without telling us why it was necessary … without the affidavit, we’re flying blind in the dark,” Graham said, adding, “The American people are going through too much pain, too much heartache on this endless effort to destroy Donald Trump.”

Graham’s comment came a day after Department of Justice lawyers argued in court that the affidavit should be sealed, including redacted versions of the document, because it would harm the agency’s investigation.

An affidavit would provide more details about the investigation and would provide insight into why the federal government is investigating Trump, including what triggered last week’s raid on Mar-a-Lago.

So far, a U.S. magistrate judge in the case authorized the unsealing of an FBI warrant and property receipt, which showed that agents took materials there were allegedly considered top secret or classified from Trump’s home. The judge, Bruce Reinhart, who in 2008 represented individuals associated with infamous sex trafficker Jeffrey Epstein, scheduled a 1 p.m. Thursday hearing on whether the affidavit and other related documents should be unsealed.

But Trump on Monday accused FBI agents of taking three passports from him, suggesting that the raid went too far. Department of Justice officials confirmed Monday evening that the passports would be returned, according to a screenshot of emails posted by a Trump spokesman.

Like Graham, Trump on Truth Social called on the federal government to release the affidavit. Judicial Watch, media outlets, the Florida Center for Governmental Accountability, and other groups have filed motions to unseal the affidavit and other related documents.

Department of Justice lawyers wrote in a Monday filing that releasing the document would “irreparably harm the government’s ongoing criminal investigation.”

“Even when the public is already aware of the general nature of the investigation, revealing the specific contents of a search warrant affidavit could alter the investigation’s trajectory, reveal ongoing and future investigative efforts, and undermine agents’ ability to collect evidence or obtain truthful testimony,” they wrote in a 13-page filing.

“In addition to the implications for the investigation, the release of this type of investigative material could have ‘devastating consequences’ for the reputations and rights of individuals whose actions and statements are described,” the lawyers continued.