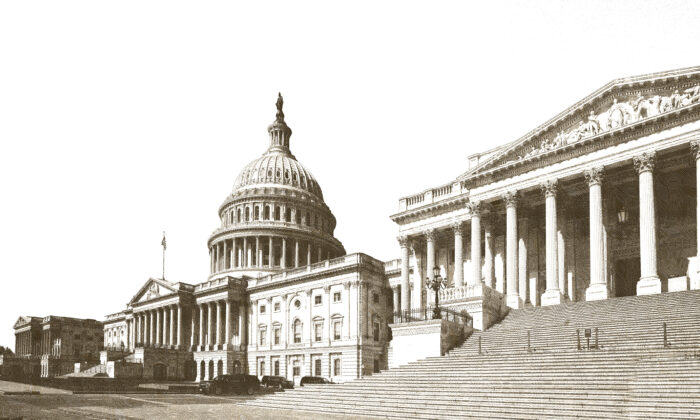 The previous essay explained that the Constitution is fundamentally a document granting enumerated (listed) powers. Like all such documents, the powers it grants are limited.

These limits are one of the Constitution’s most important features. And they have been targets of a hostile propaganda campaign for many decades.

“Progressive” commentators in politics, academia, and the media claim that limits on the federal government’s authority impede creative and effective solutions to social problems. They’ve enlisted many issues to promote their cause:

Other issues on the list have included civil rights, consumer protection, inequality, K–12 education, climate change, racism, and “crumbling infrastructure.” Whatever the malady, the prescription—federal action beyond what the Constitution authorizes—is always the same.

Just for once, I’d like to hear one of the propagandists admit that, in retrospect, too much federal intervention made a problem worse. They would have a lot of examples to choose from, but I don’t ever expect to hear them say this.

Unfortunately, the campaign to persuade Americans that the federal government is and should be omnipotent has enjoyed great success. One reason is that public school civics education often misrepresents the Constitution’s meaning and the reasons behind that meaning.

This essay helps to fill the gap by explaining how the Constitution confines federal powers and why it does so.

How the Constitution Limits Federal Powers

The Constitution limits the federal government in four general ways:

First: The Constitution is the legal document by which the American people granted authority to certain public officials—mostly federal officials, but not exclusively. The Constitution specifically enumerates all powers granted. The list is long but finite. The items enumerated include, among others, national defense, coining money, creating and operating the post office, building and maintaining post roads (intercity highways), regulating foreign and interstate trade and some activities associated with trade, and controlling immigration.

A long-standing legal rule tells us that because the Constitution lists the federal government’s powers, any power not on the list is denied.

Second: The Constitution specifically prohibits some federal activities. The prohibitions appear mostly, but not entirely, in the first eight amendments of the Bill of Rights. For example, the government is barred from discriminating among religions, restricting freedom of speech, infringing the right to keep and bear arms, or adopting those retroactive measures called ex post facto laws. We often refer to prohibitions on government action as creating or recognizing “rights.”

Third: The 10th Amendment reinforces the rule that the only powers granted to the federal government are those the Constitution enumerates.

All these constitutional restrictions are anathema to “progressives.” So they alternate frontal attacks on the Constitution with claims that the document doesn’t mean what the document clearly says. They also launched a decades-long propaganda campaign to convince us that all power should flow from the center.

But why shouldn’t it? Why didn’t the Founders establish an omnipotent central authority?

Why the Constitution Limits Federal Power

History provides part of the answer. Before 1763, the founding generation lived happily within the British Empire. The empire was governed as an informal federation, leaving individual colonies with a great deal of local control. But when British political functionaries decided to centralize power in London, the founding generation rebelled. Once independence was achieved, Americans were disinclined to adopt a constitution granting the national government the omnipotence they had denied to the imperial government.

On a broader level, the Founders understood that limits on the federal government, especially when checked by potent states, would help preserve human freedom. In New York v. United States (1992) the Supreme Court explained it this way:

“The Constitution does not protect the sovereignty of States for the benefit of the States or state governments as abstract political entities, or even for the benefit of the public officials governing the States. To the contrary, the Constitution divides authority between federal and state governments for the protection of individuals. State sovereignty is not just an end in itself: ‘Rather, federalism secures to citizens the liberties that derive from the diffusion of sovereign power.’ … ‘Just as the separation and independence of the coordinate branches of the Federal Government serve to prevent the accumulation of excessive power in any one branch, a healthy balance of power between the States and the Federal Government will reduce the risk of tyranny and abuse from either front.’”

Moreover, the Founders understood that decentralization usually improves governance. A decentralized system allows states to tailor local policies to local preferences, local culture, and local needs. For example, one reason the response to COVID-19 should have been carried out at the state and local levels was that health restrictions that make sense in densely populated New York City would be ridiculous in the wide-open spaces of Montana or South Dakota.

Recall some of the greatest moments in the advance of civilization: the awakening of human intellect in ancient Greece; the quickening of trade and culture, rule of law, and rise in living standards in the early Roman Empire; the flowering of arts and commerce in Renaissance Italy and Germany; the beginnings of the Industrial Revolution in England; and the economic and technological takeoffs in 19th-century Europe and America.

You may have been taught about these events in school, but you almost certainly weren’t taught what they all have in common: They all occurred in an environment of political decentralization. Sometimes the decentralization was so extreme that the central authorities (if, indeed, there were any) couldn’t even keep the peace. Yet society leaped ahead anyway.

Decentralization permitted the Aristotles and Galileos to move to neighboring jurisdictions more hospitable to their work. It permitted ethnic and religious groups, such as the Jews and Huguenots, to escape persecution and continue productive lives in relatively tolerant Holland and England. It allowed the Ptolemys, Bacons, and Edisons to carry out scientific and technological research in comparative freedom.

Decentralization also encouraged competition among sovereignties and semi-sovereignties for people and for talent. The most welcoming places were rewarded with the most progress.

Americans built modern society in an explosion of progress during the period when the Constitution’s constraints on federal authority were still honored. During that period, Americans, along with those living in a politically fragmented Europe, tamed electricity, developed modern medicine, and invented the telegraph, telephone, radio, television, railroad, automobile, and airplane. We still depend heavily on basic technology created during the era of decentralization.

Certainly, progress has continued since that time, but the rate is slower. If you doubt it, ask yourself this: If two bicycle shop owners tried to invent the airplane in the current regulatory state, how far do you think they would get?

Or weigh the issue from another perspective: Automobiles, then called “road locomotives,” were invented more than 200 years ago. They were first mass-produced more than a century ago. Why are we still driving them instead of using more exotic modes of personal transportation—such as household flying vehicles? Why have so many of the advances predicted by 20th-century science authors failed to come true? In 1940, speculative writers thought we’d have colonies on the moon by now. Based on the pace of progress over the preceding 150 years, they had every reason to think so. But under government pressure, progress slows.

Centralized power, not the Constitution, impedes creative and effective solutions to social problems. The propagandists are wrong. The Founders were right.