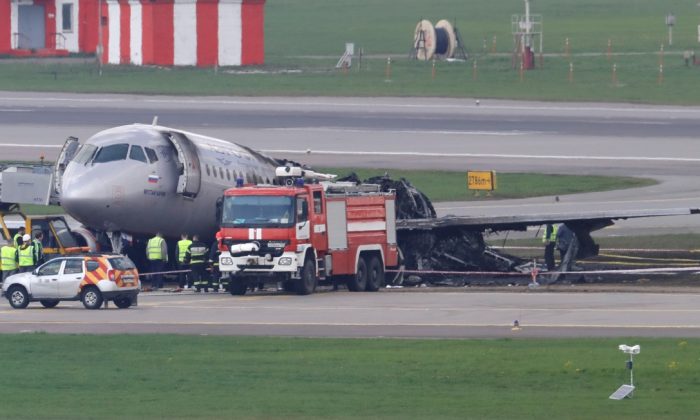 Members of emergency services and investigators work at the scene of an incident involving an Aeroflot Sukhoi Superjet 100 passenger plane at Moscow's Sheremetyevo airport, Russia on May 6, 2019. (Tatyana Makeyeva/Reuters/File Photo)
Europe

MOSCOW—Lightning struck a Russian Sukhoi Superjet 100 aircraft knocking out its auto pilot system shortly before it crash landed in Moscow last month killing 41 people, investigators said on Friday, adding it had approached too fast and been too heavy.

The Russian Aeroflot passenger plane, which had been flying from Moscow to the northern Russian city of Murmansk, caught fire as it made a bumpy emergency landing at Moscow’s Sheremtyevo airport on May 5.

The plane, which was carrying 73 passengers and five crew members, hit the runway hard and bounced along the tarmac, with the fuselage quickly becoming engulfed in a fireball.

Some passengers and crew were able to escape by using emergency chutes, but others could not get out, despite the arrival of fire crews at the scene.

The investigation into the crash is being closely watched as the Superjet was the first new passenger jet developed in Russia since the Soviet Union collapsed. Its reputation is now on the line with signs of nervousness emerging after the crash among passengers and operators.

Investigators on Friday did not name a single cause of the crash, the second deadly accident involving the Superjet in nine years of service, saying they needed more time to carry out experiments and would be issuing a final report at a later date.

But the preliminary report, from the Interstate Aviation Committee which investigates plane crashes in Russia, presented for the first time a detailed reconstruction of what happened, highlighting several important moments.

“Holy Christ!” one of the crew members exclaimed after lightning struck the plane setting off an alarm and turning off its auto pilot system, the report said.

A short while later, the communications system went down, it said, forcing the crew to switch to an emergency frequency to communicate with air traffic control.

Initially and despite those problems, investigators said the crew appeared to believe that there was nothing to worry about, but told air traffic control that they were returning to the airport anyway.

However, when the plane came into land it was overweight, they added, and traveling too fast, and its approach was sometimes erratic.

Despite those observations, investigators did not name pilot error as the cause of the crash, saying the way the plane had been flown was similar to how other pilots flew it routinely.

Russian investigators have opened a criminal investigation into the crash and are looking into various versions, including technical failure, human error, and bad weather conditions.

It was unclear when a final report into the crash would be issued.

By Andrew Osborn and Polina Ivanova