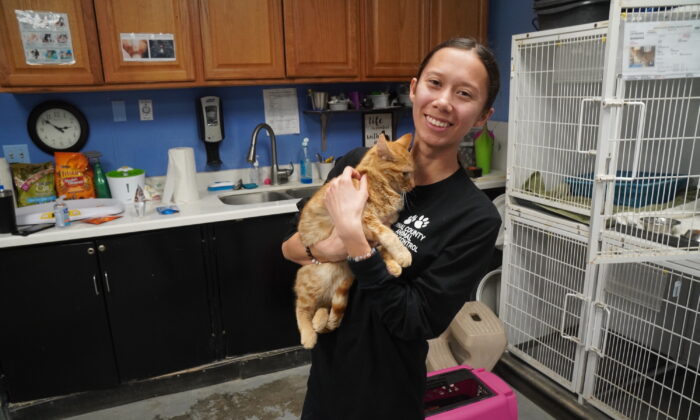 PINAL COUNTY, Ariz.—Life during the COVID-19 pandemic could be an especially lonely time for homebound Americans, and to ease the stress, many families adopted a pet for daily companionship.

The American Society for the Prevention of Cruelty to Animals (ASPCA) reports that in 2021 alone, 23 million households—nearly 1 in 5—had taken in a cat or dog since the beginning of the pandemic in 2020.

“The vast majority of these households still have that pet in the home—90 percent for dogs and 85 percent for cats—and are not considering rehoming their pet in the near future,” according to the society in a recent survey.

Matt Bershadker, ASPCA president and CEO, said in a statement that this “incredibly stressful period motivated many people to foster and adopt animals, as well as further cherish the pets already in their lives.”

What’s more, the organization’s research found “no significant risk of animals being rehomed now or in the near future as a result of the lifting of pandemic-related restrictions,” Bershadker said.

“Pets are still providing their families with joy and comfort, regardless of changes in circumstances, and loving owners continue to recognize and appreciate the essential role pets play in their lives.”

Still, in many cases, if families have to find a new place to live after the lifting of the federal eviction moratorium on July 31, 2021, they might be unable to bring their pets.

In Arizona, pet surrenders at community shelters began to climb with the end of the moratorium, with projections of 2,000 new intakes per month—5,000 being a worst-case scenario.

At the Pinal County Animal Care and Control shelter in Casa Grande, Arizona, director Audra Michael said the facility is now “triple overcrowded,” with 152 dogs and 30 cats as of March 6, placing a strain on the agency’s budget and available resources.

“It presents some problems,” Michael said. “People are being evicted or they can’t take their pet with them. Or they don’t have the resources to care for them anymore.”

Lindsay Hamrick, director of shelter outreach and engagement for The Humane Society of the United States, said the agency hasn’t seen any nationwide increase in pet surrenders in recent months.

In fact, overall pet intakes are “actually down.”

“We saw in the very beginning of the pandemic that people were going to be home and isolated,” Hamrick told The Epoch Times. Still, The Humane Society remains concerned about the “eviction crisis” and its impact on pet surrenders, including the lack of affordable, “pet-inclusive” housing despite studies that show there are benefits to pet-friendly properties, she said.

“Even though we’re pretty optimistic about pet adoptions,” animal shelters are “overwhelmed” by a backlog of cats and dogs waiting for a home, Hamrick told The Epoch Times.

The ASCPA acknowledges that even without a national surge in returns, there are a number of reasons making it difficult for people to adopt or keep a pet.

Often, this is due to factors outside their control, she said.

For these reasons, the organization encourages pet owners who may be considering surrendering a cat or dog to reach out to a friend or neighbor for help, or contact their local shelter for assistance.

In July 2021, the Arizona Humane Society announced the formation of the Pet Housing Help AZ Task Force, a coalition of seven agencies, to provide resources to keep families and pets together.

“In Maricopa County, people’s ability to cover pet care costs and related expenses have been drastically affected by the pandemic,” the organization said.

“Because the pandemic has exacerbated affordable housing shortages that already existed, renters across the country and low-income households often choose between paying rent and buying groceries, medicine and other necessities—including pet-related expenses.”

The task force was formed to expand temporary foster programs for pet owners and to increase public awareness of the many advantages of pet-friendly housing and landlords.

Before the pandemic, Maricopa Animal Care and Control saw a 36 percent increase in owner surrenders of pets due to housing-related reasons, including evictions and homelessness.

At the same time, the no-kill Pinal County animal shelter was housing around 25 dogs—the lowest number Michael has seen in years, she said.

Now, triple crowding seems to be the new normal.

“We do have a waiting list for people who want to surrender their pet. We call them when we have space. It might take a week. It might take two weeks. It’s not getting any better. Not yet. I’m hoping it does,” Michael said.