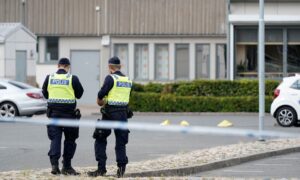 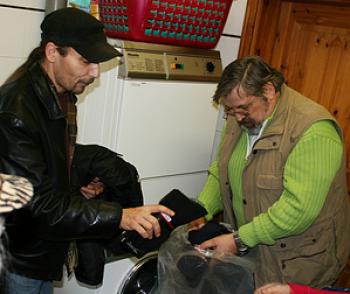 Always Championing the Cause of the Poor

Werner Gretsch's gray Opel is parked outside the Alimaus at Nobistor, where indigent people can get a meal. He removes bags of clothing from the car's trunk. His wife Ursula is already inside Alimaus, but got no further than the dining room door. She is immediately surrounded by men and women who reach out their hands for things from the huge bags: jackets, vests, warm socks, thermal underwear shirts, fleece pullovers, sweatshirts, and undergarments. "Exactly my size," declares a joyous young woman, saying thanks and disappears.

Ursula pushes the bags closer to the clothing storage area, to keep the entrance free. "Who else needs a jacket?" "I do!" "Do you think it would fit you?" Ursula, with the seasoned look of a clothing salesperson, judges the person's size.

She has done this kind of charity work for 43 years now. They call her The Train Station Angel. Be it clothing, food or what else is needed for indigent and homeless in Hamburg, she is there for the needy. In her 43 years she has learned to judge a person's size with great accuracy. "Those are new jackets?" questions someone incredulously. Clothing donations are usually second-hand.

How to Become an Angel

When young, Ursula ran a pub at St. Pauli and gave poor people food after closing hours. "People would sit there all the time and were hungry." Soon the questions came, "Would you have a pair of pants for me? Could you find me a jacket?" When even her acquaintances ran out of used clothing donations, the young pub keeper began asking around Hamburg's business community for donations for the homeless. "And that is how it has remained till today – I procure everything and try everything." And as the years went by, it amounted to more and more.

Meanwhile, Ursula's story has appeared in newspapers and on TV. She became acquainted with well-known people and is occasionally their guest at high society functions. That gives her musings—"I don't know them, those rich people." But once she learns that for instance Mr. Darboven would be present, her thoughts immediately turn to the homeless and she approaches him for a donation … for a Christmas celebration for the homeless; around 400 people. He immediately agreed. Since then he has donated coffee, tea and juice each year, so the homeless might have a semblance of a Christmas celebration.

Begging to Benefit of the Poor

She has to muster a bit of courage in her quest to beg for the homeless. "I constantly have to go and approach people in a friendly manner [to donate]." Meanwhile these donors are approaching her.

For instance, the new clothing this time is courtesy of the Civic Trust August Mohr. That organization also pays for her yearly public transportation pass so she might get around during the week when her husband is at work.

Karstadt department store people called her last year to have dishes ready to be picked up for 100 people. "That was a lot of stuff," she remembers. Thirty of the sets went to the Ark, the children and youth center in Jenfeld that takes care of needy youths.

"Everyone Should Help to the Best of his/her Ability!"

Her opinion of youths who attack others: "they need a place of belonging. Youth needs support to prevent them from doing stupid things. One has to devote more time to them."  Youths in her area have approached her if she could find them a "Bolzplatz (Soccer area)."

"Each one should help one, wherever possible." She meets ever more people who get by with the minimum of resources and are at their wits' end. They approach her with all manner of needs: "Can you help?" She finds herself saying "yes" but does not yet know how.

Her husband Werner has supported her from day one. The couple has been married 27 years and has not yet had a fight. He used to say, "Chubby one, when you have a problem, come to me." Last year he was the victim of a tremendous accident and was a patient in Boberg Hospital for nine months. The fire fighters had to rescue him from under 2,5 tons of debris.

When the homeless community got wind of this, they not only visited him in the hospital but also tended the Graetsch family' garden plot, moved stones, moved the lawn, set out new plants and trimmed bushes. They told Ursula: "We are finally able to pay something back."