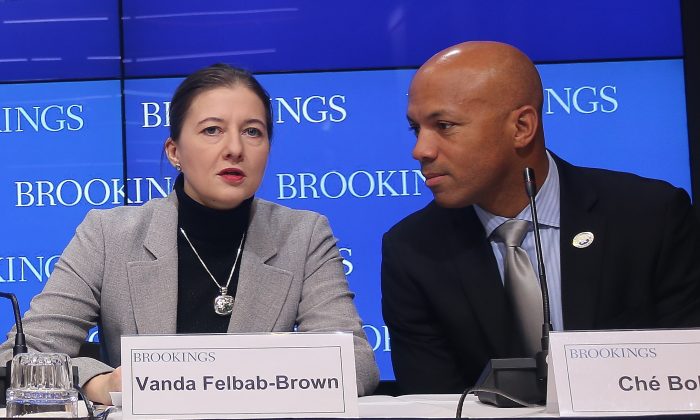 WASHINGTON—The United States and the international community have been engaged in Afghanistan for 15 years and poured in billions of dollars to stabilize the country. It’s not looking good. The news headlines in the United States emphasize the government conflict with the Taliban and, lately, with ISIS, but almost nothing is reported on how the Afghan people are faring today after decades of constant warfare.

In addition to the Taliban insurgency, the Afghan people are also beset with other troubles: political dysfunction, drought, earthquakes, depletion of natural resources, and ubiquitous corruption. The population will double in the next 20 years, placing a strain on Afghanistan’s natural resources, particularly water, which has become a frequent source of conflict, according to Mercy Corps, an NGO currently active in the country.

It doesn’t look hopeful for many people, especially the young people, who are the country’s future. Last year, Afghans left for Europe and elsewhere in larger numbers than at any other time in the decade. The large number of Afghan refugees is not getting much media coverage, and much less coverage is given as to why this exodus is taking place.

To provide an update of the current status of the war and stabilization effort in Afghanistan, the Brookings Institution held a forum, “Stability and human security in Afghanistan in 2016,” at the start of the new year on Jan. 4. Two of the panelists had made recent fact-finding trips to Afghanistan, and two reported on efforts of the humanitarian NGOs Mercy Corps and Doctors Without Borders.

The economy has taken a downward trend, said Ann Vaughan, Mercy Corps’ director of policy and advocacy. Mercy Corps, a global and development humanitarian organization that works in more than 40 countries, has been operating in Afghanistan since 1986. Vaughan said unemployment has increased significantly, and the economy shows little prospect of improvement with a security situation that is not very inviting to outside investment.

Afghanistan produced the world’s largest global refugee population until last year when Syria replaced it. Nearly 10 percent of the Afghan population—2.6 million—have become refugees, according to Mercy Corps. This number is reported also by UNHCR in June 2015.

About 50,000 Afghan refugees fled to Europe last year, which is the second or third highest of those nationalities seeking refuge there, said Vaughan.

Moreover, Afghanistan had 948,000 internally displaced persons (IDPs) last year, according to UNHCR. The probable reason for these large numbers of IDPs is largely because of the conflict and natural disasters.

“Even if the security [factor] were fixed tomorrow, Afghanistan would still have developmental challenges,” Vaughan said. With the land erosion, bad land management, depletion of natural resources, drought, it has become increasingly difficult to stay on the farm and work and feed one’s family, she said.

“Eighty-five percent of the population relies on agriculture and natural resource-based livelihoods, leaving them vulnerable in a precarious economy,” states the Mercy Corps website. More than two out of five (42 percent) of the population live below the poverty line—per capita income less than US$14 per month, according Mercy Corps.

Even if the security [factor] were fixed tomorrow, Afghanistan would still have developmental challenges.
— Ann Vaughan, director of policy and advocacy, Mercy Corps

Medical needs are a special challenge for Afghans who live in “ungoverned spaces,” because of a “growing deterioration in the last few years in terms of security in many of the contested areas,” said Jason Cone, executive director of Doctors Without Borders (MSF), which has been operating in the country since the 1980s. MSF pulled out of Afghanistan in 2004 and returned in 2009. Cone said that in Afghanistan, Doctors Without Borders’ medical personnel treat 16,000 each month.

Based on a survey of their patients in 2014, one in five patients said that one of their family members or a close friend died due to lack of access to medical care in the provinces where MSF is active. Of those who did manage to get to an MSF hospital, 40 percent had to face the challenges of fighting, land mines, check points, and being harassed, Cone said. The financial cost is a huge barrier to receiving health care; 44 percent of their patients were forced to borrow money or sell goods. Cone said it was highly likely that their 2014 survey findings are still valid today, or the situations is even worse.

“The security situation in Afghanistan is bad; yet it is hardly catastrophic,” concluded Michael O’Hanlon, senior fellow at Brookings, from his visit in December. O’Hanlon, by nature an optimist, pointed to the positive developments. While the fall of Kunduz in the northern part of the country was a big loss, Afghan security forces (with American air power) took it back within a few weeks, he said.

O’Hanlon conceded that “the Taliban remains resilient,” but their net gains last year don’t amount to more than 5 percent of the country’s population, he said.

Felbab-Brown, who paid a visit in September–October, was much more pessimistic. She said that the Taliban control or at least have influence in one-third of the country. In her dispatch from Kunduz in October, she wrote, “The Taliban operation to take Kunduz was very well-planned and put together over a period of months, perhaps years.” She wrote that it had a tremendous psychological effect. “For the first time since 2001, the Taliban managed to conquer an entire province and for several days hold its capital,” she wrote.

Felbab-Brown is the author of “Aspiration and Ambivalence: Strategies and Realities of Counterinsurgency and State-Building in Afghanistan” (2012).

The Taliban victory was due in part to the general ineffectiveness of the Afghanistan Local Police, which is a U.S.-funded local defense force, really a collection of local militias capped at 30,000. The concept was to counter Taliban insurgents in cities in order to free up Afghan military to fight offensively. The A.L.P. has not turned out well and too often has exhibited predatory and abusive tendencies. The New York Times stated, “While the forces have performed well in some parts of the country, in other parts, like Kunduz, they are seen as a source of chaos and banditry rather than security.”

Felbab-Brown said that the U.S. military made the right decision not to expand the force despite the pressure of the Afghan government to double its size with the apparent desire to use the A.L.P. as a source of political patronage.

“Particularly detrimental and disheartening was the fact that many Afghan National Army (ANA) and Afghan National Police (A.N.P.) units, led by weak or corrupt commanders, did not fight, and threw down their arms and ran away,” Felbab-Brown wrote. However, she said that the Taliban also made enemies of the locals due to its brutality while in Kunduz.

O’Hanlon and Felbab-Brown agreed with President Obama’s decision on Oct. 15, 2015, to reverse course of removing all operational U.S. forces from the country by the end of 2016 and retain 9,800. O’Hanlon would prefer the number be modestly larger at 12,000 and to “plan to stay at that level through the decade.”

For the first time since 2001, the Taliban managed to conquer an entire province and for several days hold its capital.
— Vanda Felbab-Brown, senior fellow, Brookings Institution

From the Doctors Without Borders perspective, Cone said there needs to be a renewed commitment of the armed groups to respect the sanctity of medical facilities and the rules of war. Cone made clear that calling the Oct. 3, 2015, U.S. airstrike on the MSF hospital in Kunduz “tragic” or a “mistake” and “not intentional” does not go far enough and is not acceptable to MSF. Medical teams at the Kunduz facility treated more than 22,000 patients and carried out 4,241 surgeries in the year 2014.

MSF and others who provide medical facilities need to know that their organizations are safe on the front lines. “Under International Humanitarian Law, medical facilities obtain protected status as long as they are devoted to the wounded and sick,” said Cone.

MSF worries that countries operating under the banner of counterterrorism have become too lax and indifferent to the international treaties and conventions they signed.

Forty-two people were killed, including 14 staff members from the air attack that lasted between an hour and 75 minutes. It was by no means the only strike that the organization and other medical facilities have suffered in conflict zones—Syria and Yemen come to mind—but by far the worst one.

Felbab-Brown said that despite the military setbacks, “the core of Afghanistan troubles” lies in the politics. She was adamant that given the situation now with a major Taliban push, a dire economic situation, and people leaving the country, “Afghan politicians equally need to put aside their self-interested hoarding, plotting, and back-stabbing, which are once again running high, and being put ahead of the national interest,” she wrote.

O’Hanlon said there is still nepotism and corruption in the military and police, but Afghanistan President Ashraf Ghani is taking measures to address it and forced the retirement of 70 senior military officers last year. The central government is making headway in combating endemic corruption. As part of an anti-corruption strategy, oversight has tightened in the awarding of government contracts, he said.

They have their work cut out. International Transparency ranked Afghanistan on corruption at 172 out of 175 countries in 2014.