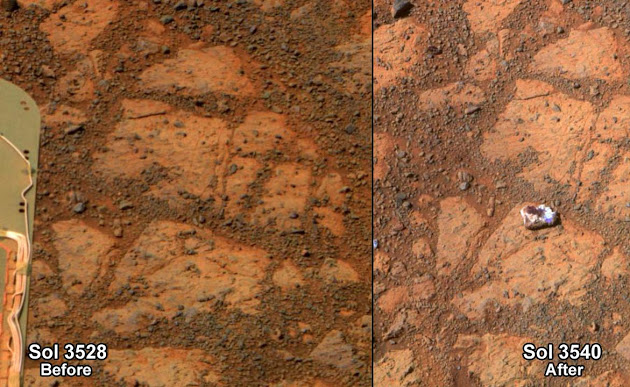 An object found by the Opportunity rover on Mars (right), and the same spot 12 days earlier (left). (NASA)
Beyond Science

NASA’s Opportunity rover took two photos on Mars in the same spot 12 days apart. Sometime over the course of the 12 days, an object appeared. It has been described as a jelly-doughnut-shaped rock; but it has also been described as alien fungus.

The latter description comes from Rhawn Gabriel Joseph, Ph.D. Joseph notes the similarities between the object and Apothecia, a type of fungus.

Joseph filed a lawsuit against NASA on Jan. 27, hoping to force the agency to investigate the possibility that the object could be alien life (see the full complaint embedded below). A NASA status report published Jan. 31 states that “work on [the] mystery rock continues.”

The object has a red interior (hence the “jelly doughnut” comparison) comprised of an unusual amount of sulfur and magnesium; it also has twice as much manganese as any object ever observed on Mars.

“We’re completely confused,” said Steven Squyres, investigator for the Mars Exploration Rover Mission, in a presentation describing Opportunity’s findings over the past decade. “We’re having a wonderful time. Everyone on the team is arguing and fighting.”

Dr. Joseph said it is possible the object is fungus that grew on the spot, rather than a rock kicked up by the rover, as suggested by NASA. Another theory is that it is a piece of debris from another object that hit the planet over the course of the 12 days between photos.

“The ‘mysterious’ bowl-like structure which appeared on Mars does not resemble a rock or a meteor, but a lichen fungus which on Earth is known as ‘Apothecia,’” Dr. Joseph wrote. “Typically, if deprived of moisture, Apothecia will quickly dry and dehydrate and then become quite brittle—exactly as depicted in the photos of the Martian ‘mystery’ structure.”

He published an article in the Journal of Cosmology on Jan. 17. This publication has received some criticism in the scientific community. The journal describes itself as a peer-reviewed publication established with “an editorial policy unlike all other scientific journals, which was an openness to all scientific ideas even those which the editors disagreed with and those which challenged the cherished idols of the status quo.” Its editor-in-chief is Harvard-Smithsonian astrophysicist Dr. Rudolf Schild.

Dr. Joseph’s biography on his website states that his field of study is neurology. He obtained his Ph.D. from the University of Health Sciences–The Chicago Medical School. He completed his internship and training at Yale University Medical School.