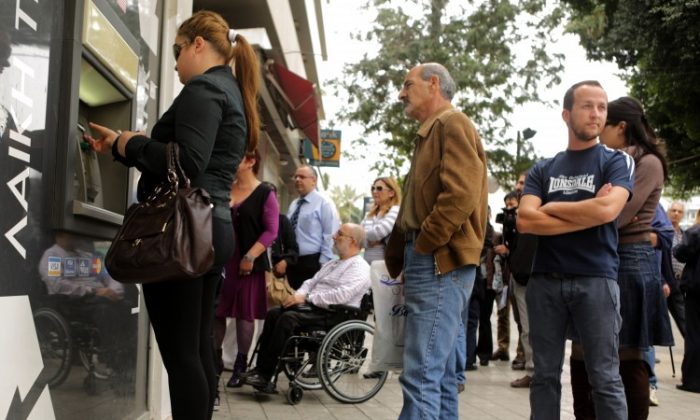 People wait in line to withdraw money from an ATM of a Laiki Bank branch in Cyprus's capital, Nicosia, on March 21, 2013. Financial turmoil in Cyprus has left its mark on daily life—from closed shops, to flaring tempers in ATM lines, to peaceful protests. (Patrick Baz/AFP/Getty Images)
Europe

Life in Cyprus Amid Financial Turmoil

The image of Cyprus’s financial ruin that stands out to photographer Patrick Baz is that of the shop doors with “closed” signs.

Banks have been closed for two weeks as politicians scrambled to restructure the institutions and secure eurozone loans to avoid default, but they are set to reopen Thursday.

Baz, a Lebanese Agence France-Presse (AFP) photographer who has lived in Cyprus part time for 17 years, provided snapshots of life in Cyprus.

One of his colleagues took a photo Wednesday of five containers full of cash lined up at the central bank—the German-led bloc sent about $6.4 billion (5 billion euros) to help stock the banks for Thursday’s reopening.

Security guards stand watch outside every bank branch. People line up outside the Red Cross in numbers unseen in recent years.

A year ago, AFP photographers were already prepared for big news surrounding Cyprus’s two largest banks, the Bank of Cyprus and Laiki Bank. They were told to take photos of the Laiki logo.

“Everybody saw it coming, but they didn’t see it coming,” Baz said. “People still had money at the bank. They had such trust in their government, that they believed the government would protect them.”

Members of the board of directors at both banks have been replaced with administrators who will oversee the restructuring, according to The Associated Press (AP). Cyprus agreed in a deal with eurozone officials in Brussels Monday to shut down Laiki altogether, with part of it being absorbed by the Bank of Cyprus.

Cypriot Chris Petallides lives in New York, but his daughter, Irene, is back in Cyprus. She didn’t get a paycheck from the shipping company she works for last payday, because the banks weren’t open to process the payments. He feels helpless, unable to send her cash.

When banks open Thursday, the withdrawal limit will be raised from euros $130 to $386 (100 euros to 300 euros), and payroll payments will be processed, reported AP.

People have withdrawn so much money from the ATMs, said Baz, that the government has been encouraging people to hide it in imaginative ways. The long ATM lines have been the main attraction for tourists, joked Baz.

Tourists seem generally unaware of the situation, said Baz, and immigrants landing illegally on the island’s shores are even more dazed.

When immigrants pull ashore on boats from the Middle East and North Africa, Cypriot law does not dictate that they be deported.

“They came to find the Eldorado, and they don’t understand that there’s no money,” Baz said.

The photographer, whose days have been long and full of late, estimates about 500 to 1,000 protesters are on the streets daily in the capital city, Nicosia. It may seem a small number, but proportionate to the city’s population of about 250,000, it is substantial, said Baz.

While Petallides’s daughter told him tempers are flaring at the ATM machines as people cope with the confusing and strenuous circumstances, Baz said the protests are very civil.

“I think it’s because it’s a small place, and they all know each other,” he said. Cyprus’s total population is just over 1 million. Police escort protesters and protect institutions, but it is all done peacefully.

Cypriot protesters have particularly aimed their slogans at German Chancellor Angela Merkel, as Cyprus had to come up with about $7.5 billion (6 billion euros) to secure the German-led European Union bailout totaling $13 billion (10 billion euros). Slogans such as “Merkel, you stole our life savings,” or “Hands off Cyprus” were printed on protesters’ signs.

Private security firm G4S will be deploying extra guards as banks open Thursday, but the firm’s Managing Director John Argyrou told AP, “There may be some isolated incidents, but it’s in our culture to be civil and patient, so I don’t expect anything serious.”

Baz said he can’t predict what will happen when the banks open. “That’s going to be a big surprise,” he said.

As for the future, if Cyprus can tap into its natural gas resources—currently tied up in a dispute with Turkey—it could bounce back. Cyprus does not have a strong manufacturing sector, and its economy is mostly service-based.

Baz is ordinarily a war photographer, but he has been covering the situation in Cyprus, since that is his home base. He reflected that, it may not be war, but “You can put a country down without firing a single bullet.”

With reporting by Genevieve Belmaker.