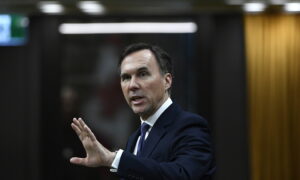 Marci Ien holds a media availability with her daughter Blaize Exeter by her side after winning the Federal byelection in Toronto Centre, on Oct. 26, 2020. (The Canadian Press/Frank Gunn)
Canada

OTTAWA—The federal Liberals saw their share of the vote drop in two Toronto byelections Monday, a humbling result for Prime Minister Justin Trudeau in the first electoral test of his government’s handling of the COVID-19 pandemic.

They also hung on to York Centre, after a nerve-racking few hours in which the lead alternated repeatedly between the Liberals and the Conservatives before Ya’ara Saks finally pulled ahead by just over 700 votes.

The results were surprisingly close for two ridings that had been considered longtime Liberal strongholds.

“These results in two of the safest Liberal seats in the country show Canadians are losing faith in Justin Trudeau,” Conservative Leader Erin O’Toole tweeted.

On Monday, Ien took 42 percent of the Toronto Centre vote—a precipitous 15-point drop from the result garnered last fall by former finance minister Bill Morneau, who resigned abruptly in August amid reports of tensions with Trudeau over massive spending on pandemic relief measures and the fallout from the WE Charity affair.

Paul, meanwhile, soared to a close second with almost 33 percent of the vote—more than quadrupling the meagre 7 percent she won in Toronto Centre during the general election. The NDP share of the vote dropped five points to 17 percent and the Conservative vote share was cut in half to less than 6 percent.

Paul had urged Trudeau to postpone the byelections, arguing that it was unsafe to send voters to the polls in the midst of the second wave of the deadly coronavirus.

York Centre was left vacant last month by Liberal MP Michael Levitt’s resignation to become CEO of the Friends of Simon Wiesenthal Center for Holocaust Studies. Although long considered one of the safest Liberal seats in the country, York Centre fell to the Conservatives in 2011 before Levitt wrested it back in 2015.

It turned into a cage match between the Liberals and Conservatives again Monday.

In the end, Saks, a Jewish activist and businesswoman, took almost 46 percent of the vote for the Liberals, a drop of about four points from Levitt’s share. Under Julius Tiangson, a businessman and activist in the riding’s sizeable Filipino community, the Conservative share of the vote rose five points to almost 42 percent.

The York Centre race would likely have been even more of a squeaker had it not been for the presence of one-time Conservative leadership runner-up Maxime Bernier, who ran in the riding for his breakaway Peoples Party of Canada. He captured a little more than 600 votes, less than 4 percent, most of it likely drawn away from his former party.

The NDP dropped four points in York Centre to less than 6 percent of the vote, while the Greens dropped almost one point to 2.6 percent.

Voter turnout was higher than average for byelections: 25.6 percent in York Centre and 30.9 percent in Toronto Centre.