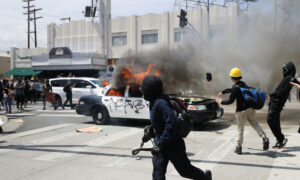 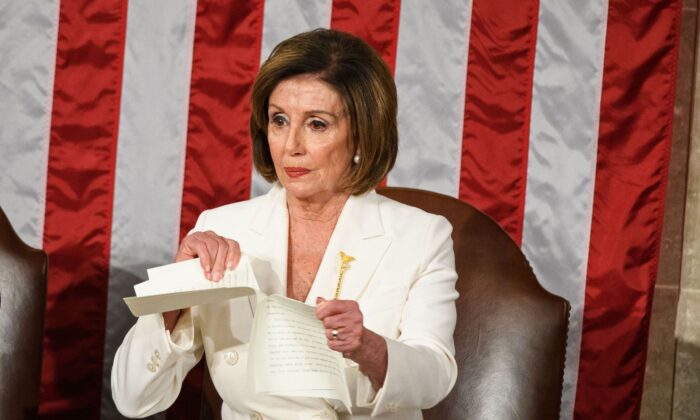 House Speaker Nancy Pelosi rips a copy of President Donald Trump's speech after he delivers the State of the Union address at the Capitol in Washington on Feb. 4, 2020. (Mandel Ngan/AFP via Getty Images)
Viewpoints 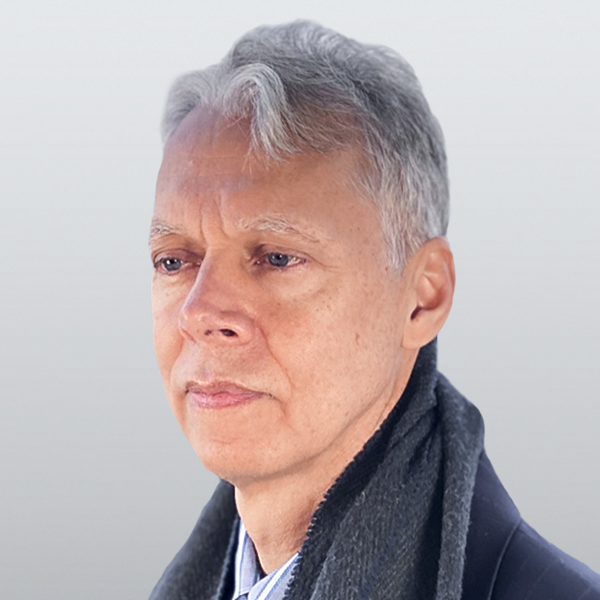 Given the irked and fearful state of the liberal temper at the present time, many people might find it hard to believe that liberalism used to be fun.

During the four years of President Donald Trump, liberals were miserable, sinking ever further into resentment and incredulity, a sense of history and America robbing them of their rightful place in control of the country. Unfortunately, the ascent of Joe Biden hasn’t much improved the mood, either. They have to spend too much time pretending that the bumbling mediocrity who now occupies the White House has statesmanlike stature for them to feel comfortable and secure.

Go back to the ’90s, however, and a whole different attitude ran through the liberal ranks. Do you remember? The Reagan–Bush Era was over, Bill Clinton was popular, and Newt Gingrich’s Congress had some off-putting characters who signified to liberals that the last gasp of conservatism was at hand. The left could be an irritant, yes, but troublemakers such as Al Sharpton had but a minor influence on national affairs and required only the occasional appeasement to be kept in check.

Meanwhile, the  North American Free Trade Agreement and other globalist moves promised even greater prosperity, and the internet, too, seemed just the kind of instrument of individual expression and universal access that tallied the liberal dream of empowerment and equity.

It gave liberals daily confirmation of … themselves. They saw that the world was moving in a liberalizing direction, and they knew that it was good. How could they not congratulate themselves when all of this ’90s advent came atop a long historical advance that set liberals on a solid moral pedestal forever (so they believed)? Apart from the Reagan interruption, they could look back at a half-century of righteous progress that gave no credit to their opponents. Liberals could claim as their own the civil rights movement, the anti-war protests, women’s liberation, gay rights, and the steady diversification of the U.S. population, all of them virtuous and overdue crusades that ennobled the ones who led them.

And what did conservatives have in 1995? Not much. Clinton’s efforts to streamline government and yield a budget surplus preempted the conservative charge of “tax-and-spend Democrats,” just as his “Sister Souljah moment” warded off the “another-liberal-soft-on-crime” allegation. Oh, conservatives could still talk about “family values,” but liberals from Hollywood to Manhattan only laughed at them for that (how many social conservatives appeared as sympathetic characters in movies and TV shows back then?). When the Monica Lewinsky affair landed in Republicans’ laps, conservatives thought they had a political winner, and a sure path back to the American conscience—and it all blew up in the disastrous 1998 midterms.

I was a liberal in 1995 and remember well the pleasing mindset. I could spot Dan Quayle’s visage on television and experience a contempt that never should have raised my dignity, but it did. It feels nice to have history on your side, to witness your beliefs realized in the public square, to see your adversaries defeated once and for all. You were right, you were good, the outcomes prove it. The country is going your way, as it should. You got hurt when George W. Bush stole the 2000 election, but his presidency failed in so many ways that all of your beliefs were vindicated. Trump sticks in your craw, but he’s gone now, disgraced and humiliated, and we can move on.

But the liberal hasn’t moved on, doesn’t seem happy again. Why the rancor? Why is the liberal personality still so fractious and reactive?

Perhaps it has something to do with what was reported in this paper (pdf) from the National Bureau of Economic Research, released in May 2009, titled “The Paradox of Declining Female Happiness.” There, researchers found a strange phenomenon. While women had since the 1970s made “enormous gains” in income and educational attainment, enjoyed “an unprecedented level of control over fertility” and new technologies that freed them from much “domestic drudgery,” women have suffered a “concurrent decline in subjective well-being.”

Freedom and independence have gone up, but happiness has gone down. The material gains for women are exactly what liberalism in its feminist varieties sought, and their success has been remarkable. Indeed, women now earn many more bachelor’s degrees, master’s degrees, and doctorates than men. While medical school enrollments are about even, women edge men in law school enrollments. This was supposed to enhance female satisfaction, to liberate women from the exploitations of the kitchen and the bedroom.

And yet, the bliss hasn’t followed. The data cast doubt on one of the supposed historic triumphs of liberalism, and liberals don’t like it. When I’ve mentioned this paradox of declining female happiness to liberals, I have gotten no answer, only a blank stare. The unexpected outcome runs against a belief liberals hold too deeply. They can’t absorb contrary facts, and, as is always the case, such situations exact a psychic cost.

And here’s another set of data that troubles the triumphant liberal. On the 2019 National Assessment of Educational Progress exam in mathematics, 12th-graders who were white scored 159, 12th-graders who were black 128. In 2015, the achievement gap was smaller but by an insignificant one point (30 points instead of 31). In 2005, the gap was the same, 30 points, and in 2000 it was 34 points (pdf).

In other words, when it comes to math achievement, the racial gap between blacks and whites hasn’t changed much at all. The gap closed tremendously in the 1970s and ’80s, and liberals could point to liberal policies and practices as the cause of that success. But since 1990, the difference between white and black math skills has withstood liberal curricular changes (for instance, a more “culturally relevant” classroom), liberal Big Government legislation (No Child Left Behind), and mountains of money.

This, too, wasn’t supposed to happen. The liberal triumph of Civil Rights was expected to deliver slow but steady progress, “racial uplift,” as it was once called, as the evils of discrimination were removed and blacks would be free to pursue happiness and climb the income/class ladder. But progress has stalled, and it has stalled for decades. Liberals don’t know what to say or do. The condition of black America has acute symbolic value for liberals (which is why they painted Trump as an unrepentant racist, though they had no evidence for it).

The triumph of Civil Rights can’t end like this; they have to save it. What to do, though? Liberals might push harder for affirmative action, but when those programs verge too much on quotas, they gainsay the liberal emphasis on individualism and neutral procedures. Liberals can’t look too closely at private causes, either, or else they might end up facing fatherlessness in black families, and feminists don’t want to deal with that.

The left’s response to the enduring gap is “systemic racism,” along with the anti-racism practices that aim to remedy it (Critical Race Theory training, etc.). This is a squarely illiberal approach, but liberals have gone along with it because they don’t know what else to do. Their failure to end inequalities has left them vulnerable to figures such as the founders of Black Lives Matter, who abhor the very individual freedoms liberals pledge to uphold. Once again, this puts liberals in a psychically difficult position to sustain.

There are other liberal disappointments. Globalization certainly has lost its glow, and so has diversity (as this 2007 study by Robert Putnam showed, more ethnic diversity in neighborhoods causes this: “Trust (even of one’s own race) is lower, altruism and community cooperation rarer, friends fewer.” All of them add up to an ego crisis for the liberal. What they could approve and affirm of themselves in 1995, they can’t in 2021, and it pains them.

The momentum they had, the confidence and swagger, the certainty of their own sanction and elevated fate—it’s all gone. They have to blame something else.

People can’t live for long with a contradiction between inner belief and outer reality, and it’s often easier to distort reality than to revise beliefs. “It’s Trump’s fault, it’s all his fault!” It was a four-year chant, and one had to marvel at the lack of self-reflection on our otherwise very sophisticated liberal who was willing to go along with absurdities such as “pussy hats” and “pee tapes”—a clear sign of psychic turmoil. Now that Trump is gone, they need another scapegoat, and so they’ve had to transfer the blame to Tucker Carlson, or to a mass murderer in Atlanta, or to a rising white-supremacist menace in the land, none of which are going to hold up.

The real problem has nothing to do with these supposed enemies and villains. It’s that the ideas and visions that liberalism has endowed with deep mythic value have fallen apart, and liberals can’t handle the truth. They utter the word diversity as if it possessed magical powers, but the word sounds more vacuous with every passing month. They talk about racism here, there, and everywhere until the word now has no more impact than white noise among anyone but one another. They address sexism as if it were 1959 and women were excluded from college admissions, while the rest of us see young women equaling or outdoing younger men in nearly every profession except engineering.

Nancy Pelosi and Paul Krugman and other leading liberals remind me of World War I generals whose cruel incompetence made the words patriotism and courage and success nothing but hot air when they came out of their mouths. Liberalism is a hollow outlook, as is obvious by the way in which the illiberal “woke” order liberals around like drill sergeants and liberals comply with, “Thank you, sir, may I have another!”

This is the source of Trump Derangement Syndrome, cancel culture, woke intimidation, and a Democratic Party that has lost its democratic character. Liberal myths have collapsed, and liberals are dazed and confused. The historic triumphs on which they based their rightness haven’t turned out so well, but they can’t give them up. They are in denial, and people in denial get very angry when the denial stops working.

In fact, they eagerly give up their principles in order to maintain their positions, as with journalists who stop behaving like journalists, academics who abandon academic freedom, and mayors who won’t defend their own cities.

The challenge for conservatives is that liberals control the major institutions in American society, and a neurotic with power tends to put his power in the service of his neurosis. He can rationalize his violations, too, even as they cross liberal principle. It’s happening every day—the implementation of unconstitutional speech codes, people fired for private behaviors. … The old liberal wouldn’t have allowed that for one second. He had conviction, and the America he inhabited appeared to reinforce it. But no longer.