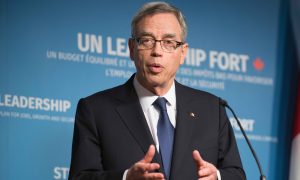 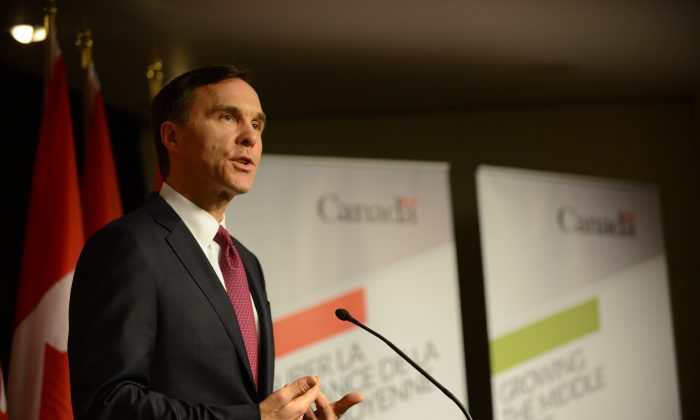 Rahul Vaidyanath
Journalist
Rahul Vaidyanath is a journalist with The Epoch Times in Canada. His areas of expertise include the economy, financial markets, China, and national defence and security. He has worked for the Bank of Canada, Canada Mortgage and Housing Corp., and investment banks in Toronto, New York, and Los Angeles.
View profile
biggersmaller
Print

OTTAWA— Budget 2016 aims to turn Canada into an innovation powerhouse, although the details are mostly still to come.

“We believe it is critical to move forward on an ‘Innovation Agenda’,” Finance Minister Bill Morneau told reporters during a press conference prior to the release of the budget.

But it will take the government a couple of years to define this new vision.

Turning startups into small, medium, and large enterprises has been a massive challenge for Canada over the years, but a new overarching innovation agenda aims to “drive greater clarity of purpose…and greater support for Canada’s innovators and entrepreneurs.”

Universities are breeding grounds for entrepreneurs and startups. One use of a new $2 billion Post-Secondary Institutions Strategic Investment Fund introduced in the budget could be used to expand on-campus support for incubators and accelerators.

We’re setting ourselves up for a longer-term innovation strategy.
— Bill Morneau, Minister of Finance, Canada

This fund is a high priority for the government as it represents a significant sum to be disbursed over three years. The budget pledges this initiative will be implemented as quickly as possible.

“I think the government is unsatisfied with the ability of Canadian firms to grow from small to medium to large and this is actually supported by empirical evidence,” Craig Alexander, Vice President, Economic Analysis at the C.D. Howe Institute tells Epoch Times.

The government is committing over the long haul to try and crack this tough nut.

“You can see that we’re setting ourselves up for a longer-term innovation strategy by putting aside $800 million over the next four years,” Morneau said.

This funding, separate from the $2 billion, is to support innovation networks and clusters, with details forthcoming in the next few months.

“It’s important to understand where the government can add value and promote innovation in Canada,” said Mike Katchen, CEO of Wealthsimple, a low-cost investment management startup, in an email. “There are three areas that I believe the innovation agenda should address to help Canadian startups: Infrastructure, talent, and funding.

“Investing in infrastructure will create a tight-knit community among startups in different Canadian cities. Another priority should be to help startups attract and retain top talent, as well as helping startups in the early stages of funding.”

Government agencies like the Business Development Bank of Canada and Export Development Canada are expected to play a greater role in helping small businesses grow. They will work with “high-impact” firms at key growth stages to provide tailored services such as building business relationships in international markets and obtaining funding.

Some of these services can come from existing incubators and accelerators across the country. But the government, through the Ministry of Innovation, Science and Economic Development, plans to implement a “performance measurement framework” for these entities.

“Coming up with the framework could be quite challenging,” says Alexander. “Businesses differ greatly depending on what sector they’re in. So it’s absolutely a sensible approach. The question is how much progress and how quickly can you do something in this area.”

Sometimes what’s not in the budget garners attention.

The Liberals had nothing in the budget about changing the way stock options are taxed. The startup community was up in arms over the possibility that this mechanism for attracting and retaining talent would be cut back.

“We think it would be a shame to tax stock options for startups, as it’s the very tool that many companies use to attract and retain top talent,” said Katchen prior to the budget’s release.

“The spirit of what they’re trying to do is aimed at the wealthy, but if they don’t make concessions, they will stunt growth and innovation in Canada.”

Morneau heard that message loud and clear in his consultations with small businesses and entrepreneurs.

“I heard from many small firms and innovators that they use stock options as a legitimate form of compensation for their employees, so we decided not to put that in our budget,” Morneau told reporters.

There’s also usually some give-and-take in a budget.

Small business won’t be seeing the tax relief promised in the 2015 Conservative budget and during the Liberal election campaign. The Harper government said it would scale down the small business tax rate from 11 percent to 9 percent by 2019. Now Budget 2016 proposes reductions below 10.5 percent be deferred.

“It’s a real kick in the teeth to small business owners especially given the Liberals promised to do it in the campaign,” Dan Kelly, president & CEO of the Canadian Federation of Independent Business (CFIB) tells Epoch Times.

The net gain to the government is $75 million over the next two fiscal years from deferring the tax cuts.

The CFIB, the voice for small- and medium-sized business, says this decision will cost small firms over $900 million more per year as of 2019.

“Other than some infrastructure spending, there is nothing in this budget that will help any small firm create even one job,” says Kelly.

Conceptually, the CFIB agrees with the support for innovation, entrepreneurship, and startups.

“But the devil is in the details and we haven’t had a chance to review that yet,” says Kelly.

Rahul Vaidyanath
Journalist
Rahul Vaidyanath is a journalist with The Epoch Times in Canada. His areas of expertise include the economy, financial markets, China, and national defence and security. He has worked for the Bank of Canada, Canada Mortgage and Housing Corp., and investment banks in Toronto, New York, and Los Angeles.
RV_ETBiz
TOP NEWS