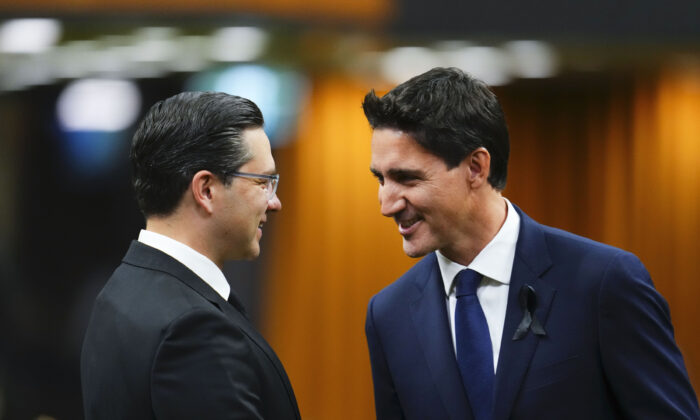 Prime Minister Justin Trudeau and Conservative leader Pierre Poilievre greet each other as they gather in the House of Commons on Parliament Hill to pay tribute to Queen Elizabeth in Ottawa on Sept. 15, 2022. (The Canadian Press/Sean Kilpatrick)
Canada

Liberals on the Offensive Against New Tory Leader as Parliament Returns

As MPs head back to the House of Commons, Liberal House of Commons Leader Mark Holland went on the offensive against new Tory leader, Pierre Poilievre, warning against stoking political division.

Holland said he hopes the Conservatives will work with the Liberals’ minority government to provide “real solutions” to problems like affordability, adding he’s pleased the Conservatives have moved back their legislation on cryptocurrency originally scheduled for this week.

Poilievre has previously touted cryptocurrency as a way to “opt out of inflation,” while Conservative MP Michelle Rempel Garner introduced a private members’ bill last February to help grow the cryptocurrency sector by compelling the government to create a plan for crypto assets within three years.

“I know that [Poilievre] has talked a lot about cryptocurrencies,” Holland said. “But as the Prime Minister pointed out, this is not a real solution. And the Canadians who would have followed [Poilievre’s] advice in that regard would have seen their savings wiped out.”

Poilievre was elected as the new Conservative leader on Sept. 10 after accumulating over 68 percent of the points on the first ballot. In his victory speech, he said the Conservatives will work to “replace an old government that costs you more and delivers you less” and promised to combat “Liberal inflation.”

“Today people feel like they’ve lost control of their pocketbooks, of their lives. The government is driving up the cost of living,” he said.

Trudeau criticized Poilievre after his leadership win, saying that he had “highly questionable, reckless economic ideas” and said he ran his campaign with “buzzwords, dog-whistles, [and] careless attacks.”

“Now is not the time for politicians to exploit fears and to pit people one against the other,” Trudeau said during a speech while addressing Liberal MPs at his party’s national caucus in New Brunswick on Sept. 12.

On the same day, Poilievre issued “a challenge” to Trudeau while speaking to reporters in Ottawa ahead of his first meeting with the Conservative caucus.

“If you really understand the suffering of Canadians, Mr. Prime Minister, if you understand that people can’t gas their cars, feed their families, or afford homes for themselves, if you really care, commit today that there will be no new tax increases on workers and on seniors—none,” Poilievre said.

During the Sept. 20 press conference, reporters asked Holland whether he expects the House’s tone to change with Poilievre now leading the Conservatives, to which he replied, “I get that during leadership [races], sometimes somebody acts one way and then they pivot, we’ve seen that before.”

“I would just impress upon the Conservatives this: that I don’t think this is a time for games. This is not a time to try to be clever, or use rhetorical tricks, or try to pretend things are solutions that aren’t,” he said.

“I think Canadians are going to see through that.”

“Sometimes I got carried away in that,” Holland said, referring to his time as an opposition critic. “But this isn’t that kind of time. I think that it’s a time that is more serious.”

Isaac Teo and Noé Chartier contributed to this report.