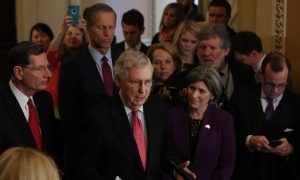 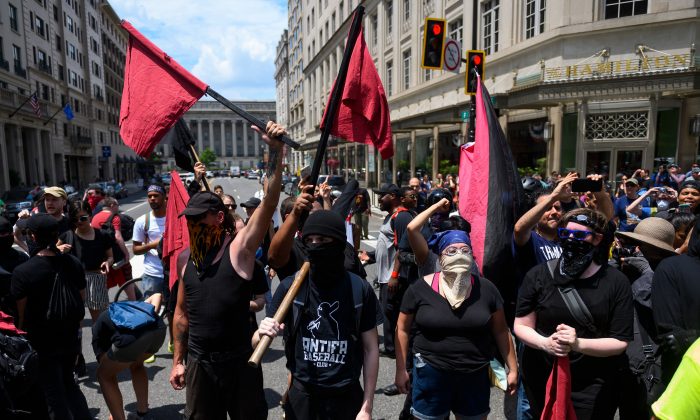 Members of Antifa march as the movement gathers for a "Demand Free Speech" rally in Washington, DC, on July 6, 2019. (Andrew Caballero-Reynolds//AFP/Getty Images)
Viewpoints

Liberalism keeps losing. Not to the right, but to the left, which liberals have always feared more than conservatives.

Liberals have seen what progressives and identity politicians and social justice types will do if you tell the wrong joke, use the wrong pronoun, or fail to register sufficient indignation at a person who crosses those lines.

It isn’t conservatives who go back many years through someone’s tweets or interviews in search of evidence that will get that person fired or banned, as leftists did with Tucker Carlson.

Conservatives don’t eavesdrop on others’ conversations and report what they hear to the authorities, as Lena Dunham did at JFK Airport, when she thought she overheard a flight attendant in a waiting area make a trans-phobic remark.

Conservatives haven’t publicized political donations in order to smear the donors and ruin their businesses, as actress Debra Messing did, when she called for all attendees at a Hollywood fundraiser for President Donald Trump be publicized.

It isn’t conservatives telling all Americans that they must not only tolerate biological-men-who-identify-as-women competing in women’s sports—they must affirm it.

Liberals have watched leftists take one extra step of intimidation after another, and they realize they’ll keep going. These are standard tactics in the playbook from Lenin to Saul Alinsky to The Squad. A solid record of left-leaning service won’t shield a liberal from attack if the liberal wavers.

After House Speaker Nancy Pelosi (D-Calif.) showed her impatience this summer with The Squad capturing so much attention, stating that The Squad were but four members of Congress, Alexandria Ocasio-Cortez (D-N.Y.) responded by saying, “But the persistent singling out … it got to the point that it was just outright disrespectful … the explicit singling out of newly-elected women of color.” The implication: Nancy Pelosi, racial profiler.

Not even eight years of loyal service alongside President Barack Obama could protect Joe Biden from Sen. Kamala Harris’s (D-Calif.) charges in the June Democratic Party presidential debate. Biden, you see, joined with some Southern segregationist senators in the ’70s and opposed busing, and Harris, who remembered being bused as a child, had to call him out. That was 45 years ago, and Biden has been a steady liberal in a thousand ways since then, but no matter—he’s guilty!

Biden tried to answer the charges, as did Pelosi, and even Whoopi Goldberg judged Messing’s call as dangerous. But liberals haven’t halted the habit of leftist targeting one bit, even though it runs squarely against liberal basics—for the individual freedoms liberalism carved out over three centuries depended on exactly the restraints that leftists won’t respect.

People must be given their own space. When someone is dining in a restaurant, you leave him alone, though he may be a famous politician for the other side. You don’t look too deeply into his private life, either, especially from many years ago. Actual crimes you may seek, yes, but not thought-crimes and word-crimes.

If everything is political, as the leftist premise has it, there will never be any peace. Everybody will be on edge, guarded, and suspicious until they are assured that everyone in the room shares a political outlook. We will pass from Johnny Carson and Michael Jordan (who during his playing days refused to comment on politics) to Stephen Colbert and Megan Rapinoe. Does anyone except the angry left believe this is progress?

It has turned the public square into a sour habitat. The bare joy of e pluribus unum is disappearing. The Academy Awards, late-night talk shows, the NFL on Sunday, comic books, and children’s books … they’ve fallen prey to an identity politics that is anything but inspiring. Is there anyone less witty and diverting than a social justice warrior?

It’s hard not to believe that the destruction of civic peace in the United States is the precise goal of the left. They seem so bent on stoking alarm. Read the website of Bill Moyers and you feel you’ve landed in a mental ward (essay titles posted during and after the campaign include: “How the U.S. Went Fascist: Mass Media Make Excuses for Trump Voters,” “If We Don’t Act Now, Fascism Will Be on Our Doorstep, Says Yale Historian,” “Forget Fascism. It’s Anarchy We Have to Worry About,” and “Trump: The American Fascist.”)

Raise the temperature of civic life, convert political difference into material threat, and license the targeting that is described above—that’s the way to social change.

This isn’t liberalism. Liberalism is about civil society, which requires a polity that here and there suspends politics. That’s the formula for national calm.

The left doesn’t want calm. Reform and revolution don’t happen among pacific groups. Let’s have no more talk about the left’s good intentions, their vision of a better world. By their actions, they reveal that the destruction of their opponents and the intimidation of their allies is a much stronger motivation than is the prospect of a just, egalitarian society.