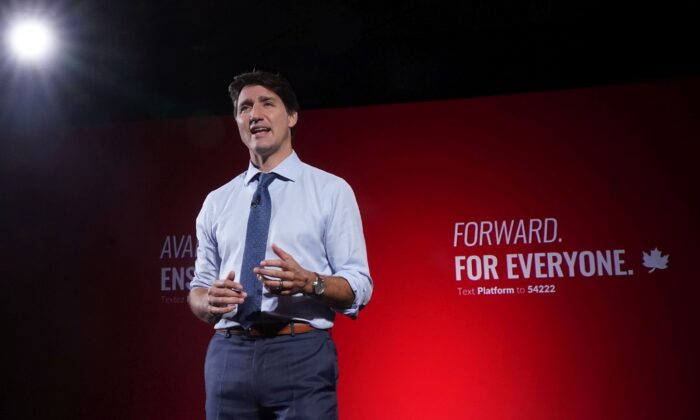 Editor’s note: This is the third in a series examining the economic platform of each party ahead of the 2021 federal election. Read the first here and the second here.

Canada has the pomp and circumstance of municipal and provincial governments. When reading the incumbent Liberal Party’s elaborate economic platform, however, one struggles to decipher where the federal government ends and where the lower levels of government begin.

Aside from Quebec’s distinct case, meaningful autonomy is already on the ropes, and the Liberals’ plan would deliver the knock-out punch. That means the party’s economic policies—from mandates to contingent funding—hasten the trend toward lower levels of government merely being administrative puppets of the Ottawa ruling class. The excruciating level of detail to which the platform outlines local policy defies belief.

Underlying the ongoing takeover of provincial and local jurisdictions is a vast centralization mentality: a lack of confidence in bottom-up growth, individual initiative, and trial-and-error experimentation in the market and in policy. The natural conclusion stemming from condescension toward decentralization and emergent order is centralization to the highest level available, be that national or global.

No Limits to Federal Intervention

Let us pause to ask ourselves what domains are left in Canadian life where the federal government does not rule the roost? The COVID-19 era, in particular, has made this question prescient, especially with provincial premiers caving to Ottawa’s demands.

If we look beyond civil liberties, though, there is the most foundational principle of a free-market economy: property. After COVID-19 measures, “A Home For Everyone,” the Liberal Party’s housing plan, is their top priority and where we see the platform’s centralization theme take shape.

Perhaps in an effort to outdo Conservative Party Leader Erin O’Toole, the Liberals’ platform promises not 1 million but 1.4 million new homes—not that either leader could ever deliver on his promise. The Liberals began a “National Housing Strategy” in 2017, an “ambitious ten-year plan to invest over $72 billion to build supply.” However, the parliamentary budget officer reports four years later that little has come of it but wasted money and grand ideas caught up in “implementation delays.”

There ought not be a national housing strategy at all, which in itself invokes Soviet-style language. The Liberals’ mantra appears to be that if at first you don’t succeed, try again. This time the party’s plan still does little to address the many logjams that impede supply, such as greenbelts, zoning, and occupational licensing.

However, the plan has an array of feel-good schemes, more than enough to make a man go cross-eyed, including tax-free savings, renovation tax credits, rent-to-own programs, price fixing, and even a “Housing Accelerator Fund.” These all allow the central planner to manipulate who can and cannot buy homes and how—targeted to favour sensitive voting blocs—while doing nothing to resolve the crisis.

It gets worse, since the devil is in the details. If you buy a home or open land and do not occupy it, look out. Starting on Jan. 1, 2022, there will be a national tax on vacant property owned by non-resident non-Canadians. Administering this will open a can of worms, but it is just the thin end of the wedge that opens the door to wholesale appropriation.

The platform promises: “Work with municipalities to identify vacant or underused property that should be converted to housing on the principle of use it or lose it.” If federal officials can come and peruse your home to see whether it is, in their eyes, underused—as a pretext to confiscation—what can they not do?

The Onslaught That Divides, Impoverishes

If there is one policy that Canadians support that would benefit the economy, it is open trade between the provinces. Allowing people to trade their labour and goods freely across the country is a no-brainer that would swiftly and permanently increase economic growth and make Canada more competitive.

Since interprovincial trade does not fit the centralization agenda, however, it has languished for decades and does not appear in the Liberal platform. This policy would unify Canadians and be a legitimate area for federal facilitation.

On the other hand, the equalization system redistributes tax revenues between provinces and divides the nation. It is one of the chief grievances behind the rising call for Western independence from Canada, manifest in the Maverick Party federally and the Wildrose Independence Party of Alberta.

Since equalization is already in place and in line with the centralization agenda, it too gets not a mention in the Liberal platform. Although slow-moving, equalization is eating away at provincial autonomy and fiscal wherewithal. Atlantic Canada, in particular, has long failed to reform, even amid glaring emigration, because equalization payments have kept the region afloat in prolonged mediocrity.

These two policies are crying out for resolution, but instead, upon reading the platform, one has to wade through a potpourri of fallacious, contorted justifications for power consolidation in Ottawa. Not only does this consolidation impede growth, it divides constituencies against each other as they battle for a bigger portion of a shrinking pie.

Never-ending deficits exacerbate the problem. The Liberal platform doesn’t even pretend to address balancing the budget, and it justifies the spendthiftiness with the voodoo multiplier effect. Diverting limited capital to government spending crowds out private investment, which is so crucial for resolving Canada’s stalled economic turnaround. Taxpayer-funded child-care is one of the vote-buying schemes thinly disguised as economic stimulus.

This unwillingness to face fiscal reality carries over to student loans. The Liberals plan to suspend interest for another two years and permanently eliminate the portion administered by the federal government. With inflation above 3 percent, lenders are getting back less than they gave out. With little incentive to pay off loans, why make the funding loans at all?

Amid the fever pitch of campaigning and the race to the bottom with endless promises, the big loser appears to be Canada’s federalism. The Liberal Party is far from alone in promoting centralization in Ottawa, but its sophistication and extreme tactics strike at the root of what has made Canada an advanced, developed nation.