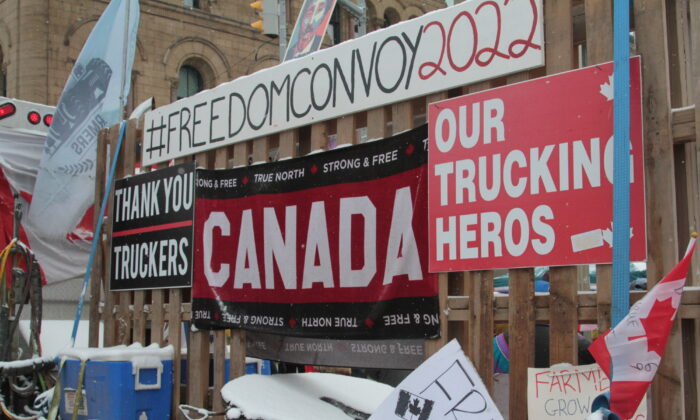 Liberal MP Ya’ara Saks said that “honk honk” is equivalent to “Heil Hitler,” while speaking at the House of Commons in defence of her government’s use of the Emergencies Act to oust protesters in Ottawa who oppose the federal COVID-19 mandates.

The protest, which first began in opposition to the vaccine mandate imposed on truck drivers crossing the Canada-U.S. border, expanded into a national movement as large convoys of truckers arrived in Ottawa in a peaceful demonstration starting Jan. 29, with many joining to call for an end to all COVID-19 mandates. Honking was heard constantly throughout the protest.

“How much vitriol do we have to see of ‘honk honk’ which is a new acronym for ‘Heil Hitler’? What do we need to see by these protesters on social media?” Ya’ara Saks said in the House of Commons on Feb. 21.

@YaaraSaks This is beyond sick. And u know better.
“Honk honk” is not the same as “Heil Hitler.”

Go talk to a survivor in ur riding and hang ur head in shame.

On Feb. 22, Saks defended her comment, saying that “for those who think that ‘Honk Honk’ is some innocuous joke. I’ll just leave this here” and shared a tweet posted by an account owner titled “Gwen Snyder is uncivil,” who says she is an antifascist.

The tweet says, “it’s easy to miss nazi/’alt-right’ signifiers are if you aren’t swimming in this cesspool all the time.” In a series of Twitter posts, the account owner then shares vocabulary and symbols that “should make you suspicious,” including one that says “’88’ and ‘HH’ for phrases like ‘honk honk'” are “a classic and a new variant.”

For those who think that “Honk Honk”is some innocuous joke. I’ll just leave this here 🧵 https://t.co/aG0GDdzOkO

Saks’ comments are the latest in a series of references to “Nazis” by the Liberals and NDP to imply the protesters are associated with Nazis.

On Feb. 16, Prime Minister Justin Trudeau said during question period to Conservative MP Melissa Lantsman, who is Jewish, that her party stands with people who wave swastikas.

Lantsman pointed to the contrasting words said by the prime minister in 2015, and his more recent remarks in September 2021 when he disparaged in a French-language interview the portion of Canadians who chose not to receive a COVID-19 vaccination.

“‘A positive, optimistic, hopeful vision for public life isn’t a naive dream. It could be a powerful force for change. If Canadians are to trust their government, their government needs to trust Canadians.’ Those are the words of the prime minister in 2015,” Lantsman said.

“These people, ‘very often misogynistic, racist,’ ‘women haters’, ‘science deniers’, the ‘fringe’—same prime minister six years later, as he fans the flames of an unjustified national emergency,” she said, referring to some of Trudeau’s more recent comments about the truckers.

“So, Mr. Speaker, when did the prime minister lose his way? When did it happen?”

Lantsman asked Trudeau to apologize for his remark but he did not.

On Feb. 19, a group of 23 Jewish scientists, doctors, and academics issued an open letter to Trudeau, saying they are “deeply concerned” about how he had adopted a “smear-by-association campaign,” portraying the protesters in Ottawa as “‘Nazi sympathizers,’ ‘racist,’ and ‘antisemitic.’”

A couple of flags were seen bearing the Nazi swastika early on in the protest in Ottawa, which the Liberals and NDP have cited when linking the trucker movement to racism and extremism.

On Jan. 29, Tory MP Michael Cooper brought a container of coffee for the truckers who just arrived at the capital. As Cooper was doing a TV interview, a demonstrator carrying a flag with a Nazi symbol on it was caught on camera behind him. Cooper later issued a statement saying he wasn’t associated with the person carrying the flag and condemned any displays of the Nazi symbol.

Edmonton Mayor Amarjeet Sohi, a former federal Liberal cabinet minister, said in a Twitter post that he—along with the mayor for St. Albert, Cathy Heron—was “troubled” to see the photo of Cooper with the flag that had a swastika on it.

“As Mayors of the two cities that straddle Member of Parliament Michael Cooper’s riding, Mayor @CathyHeron and I are troubled by a photo of MP Cooper that is being circulated with an upside down Canadian flag with a hateful symbol of a swastika on it,” he said.

“We want the rest of the country to know that MP Cooper’s presence at this rally in no way reflects the values of Edmontonians and St. Albertans. Our communities are diverse, inclusive and welcoming—hate has absolutely no place here,” Sohi said in another tweet.